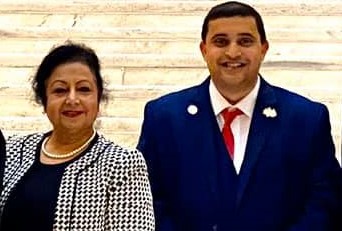 Neera Bahl was appointed by Governor Brian Kemp to serve on the Judicial Nominating Commission. She is appointed to serve on the Cobb Elections Board in July 2019. She is currently the Chairwoman of the Regional Advisory Council of the US Pan Asian American Chamber of Commerce, South East Chapter (USPAACC-SE). She serves on the Board of Advisory Council for the Chairman’s Club of Cobb Chamber of Commerce, Cobb Community Foundation and the Atlanta Legal Aid Society, among others.

Kartik Bhatt was appointed by Governor Kemp as a consumer member for the Georgia Board of Examiners for the Certification of Water and Wastewater Treatment Plant Operators and Laboratory Analysts.

“South Asian community is very good at being responsible citizens and well established but not really have not been paying much attention to politics. With the formation of SARC and my nomination, we can provide a platform for South Asian Americans where the communities are represented, and voices are heard. I can now create events, request our elected officials to meet and greet our community. In the coming months you will see a lot of SARC events,” said Bahl, adding that she was happy to be part of SARC, that was created to spread awareness among South Asian Americans to actively participate in main stream American’s political life and to believe in core values and principles of Republican Party and to support and promote it.

“They have done such a wonderful job starting with celebration of President Trump’s birthday, which was celebrated in the Indian way, including the pooja, and the havan. And the message reached the White house. And then they started promoting it more our values too,” she added.

“When Hemdatt Bhatt, Founder and Chairman, SARC asked me to assume this position, I felt honored to be part of the organization that aims to keep America safe, proud, strong and wealthy. I’m a proud Republican and glad to part of the SARC that supports the party’s values.” Said Kartik Bhatt.

SARC was formed with a mission to provide a platform for South Asian Americans to merge into main stream American politics and create a reckoned force in the Republican party. It aims to bring awareness of Republican party, their core goals, principles, run drives, get to register more citizens, independents, and borderline electorates as Republican voters.