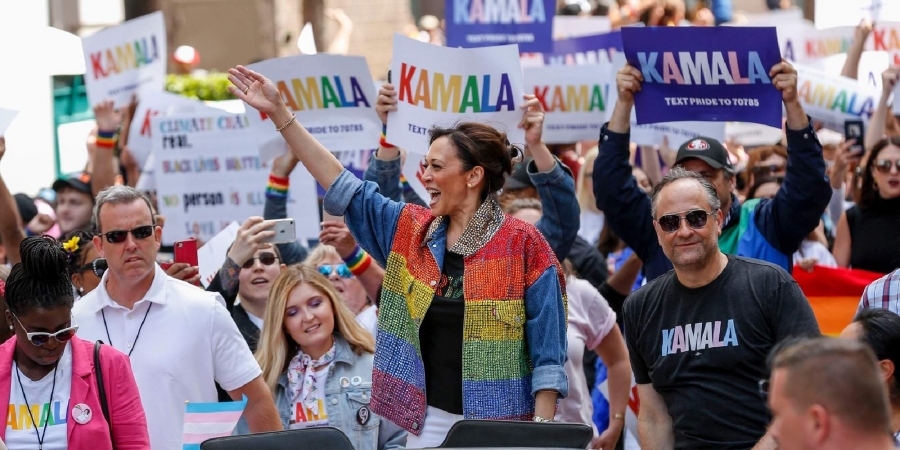 Harris was admired by many for her rainbow sequined jacket with denim sleeves as she rode in a red convertible down Market Street with contingent of supporters at the event on Sunday, the SF Gate newspaper reported.

Kris Perry and Sandy Stier, a lesbian couple who were married by Harris when she was Attorney General of California, drove the car that Harris rode in.

“Such an honour to be back home in San Francisco to celebrate #Pride. Remember, we will leave no one to fight alone,” she said in a tweet.

A video was attached with her tweet in which the senator, who is of Indian and Jamaican descent, is seen waving at the crowd from the stage with loud music in the background.

In another clip on her Twitter handle, Harris is seen dancing in the charged-up crowd with a wide grin on her face.

“Celebrating equality and diversity and the fact that we still have a fight ahead. We’re all committed to fighting equal rights and civil rights and no one should be made to fight alone,” she was quoted as saying by KRON4 news channel.

There were several other California politicians in the parade, including the state’s Governor Gavin Newsom and House Speaker Nancy Pelosi.

Several of the stars from the Netflix show “Tales of the City”, based on the series of books written by San Francisco-based author Armistead Maupin, rode in the parade, including Laura Linney and Zosia Mamet.

This year’s Pride Parade marked the 50th anniversary of the iconic Stonewall riots in New York, which was a key turning point in the struggle for equal rights for the LGBTQI community.

The first Gay Pride parade was staged in 1970 to commemorate the first anniversary of the riots on June 28, 1969, after police raided the Stonewall Inn gay bar resulting in riots that are widely considered to be a watershed moment in the modern gay rights movement.