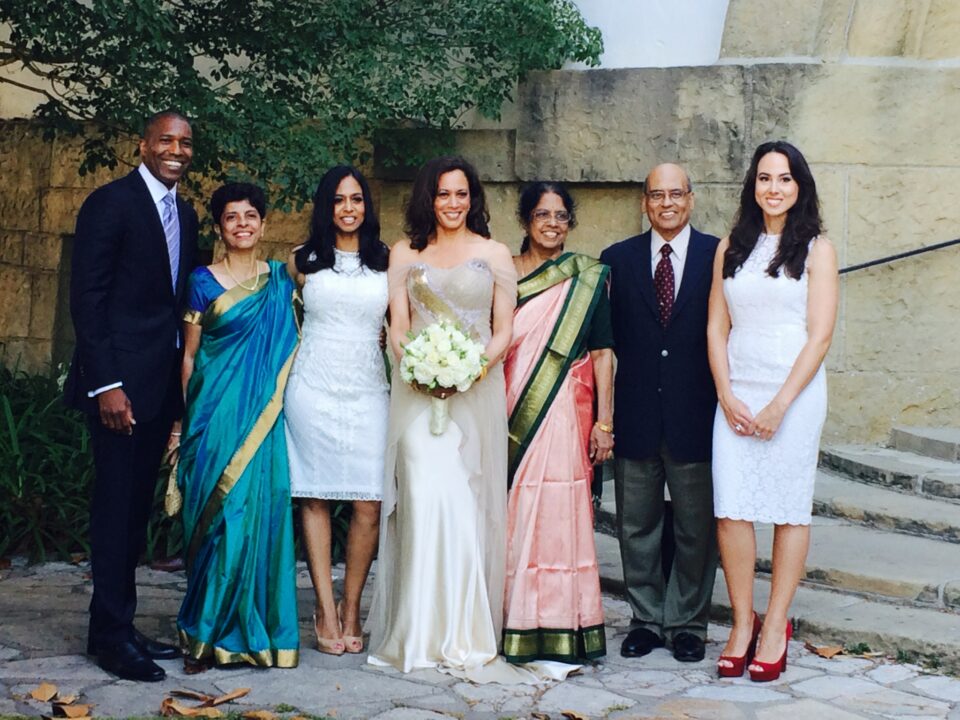 Cover photo: Kamala Harris with her family on her wedding day.

New York, Aug 12 (IANS) Kamala Devi Harris has deftly melded her dominant African American identity with that of her Indian background as a Tamil to create the evergreen American classic of the immigrant dream.

Born in the US to immigrants, cancer researcher Shyamala Gopalan from India and economics professor Donald Harris from Jamaica, Harris has leaped in a generation to running for a position that could put her a heartbeat away from the presidency.

She wrote in her memoir, “The Truths We Hold,” that she was raised in “a place where people believed in the most basic tenet of the American Dream: that if you worked hard and do right by the world, your kids will be better of than you were.”

On Tuesday Joe Biden, who is to be the Democratic Party’s presidential candidate, announced that she would be on his ticket at the nominee for vice president.

Her multiracial background – which includes a layer of a White Jewish husband, Douglas Emhoff, and two step children – gives her a degree of identity fluidity to navigate American society riven by race and ethnicity.

After her parents divorced when she was only seven, Harris was brought up by her mother, whom she has described as “tough and fierce and protective” yet “generous and loyal and funny,” and credits her for her success.

In her memoir, “The Truths We Hold,” Harris wrote that the lesson “it was service to others that gave life purpose and meaning” that she inherited from her mother came from her grandmother Rajam, who had not completed high school but was a fiery protector of victims of domestic abuse.

Moving from New Delhi to Berkeley for her PhD in the tumultuous era of the 1960s civil rights movements, Shyamala Gopalan joined the protests “with a sense of justice imprinted on her soul,” Harris wrote.

Her relationship with fellow-activist Donald Harris grew under the clamor of the protests and Kamala Harris recalls, “My parents often brought me in a stroller with them to civil rights marches.”

In this environment, she wrote, “My mother understood very well that she was raising two Black daughters. She knew that her adopted homeland would see Maya as Black girls, and she she was determined to make sure we would grow into confident, proud black women.”

Her sister Maya is also a lawyer.

One of her experiences from her childhood popped up in her memorable confrontation with Biden during a debate last year when she was running for president against him – and almost 20 others – in the initial phases of the Democratic presidential race.

Questioning his credentials on racism, she said that while he opposed efforts to racially integrate schools by transporting children by bus from their racially segregated areas to schools in another place to break down racial barriers, she was one of the children on those buses.

That also brought out the age difference between them. If he wins, he will be the oldest president to take office next year at 78 when she would be only 55.

Hence, one of the criteria for his vice president pick was for her to be younger, but with enough experience and capability to become president if the need arose.

While the African American identity became the dominant one – and, in fact, the one that boosted her chances to the get the vice presidential nomination – Harris wrote, “Our classical Indian names harked back to our heritage and we were raised with a strong awareness of and appreciation for Indian culture.”

She wrote, “My mother, grandparents, aunts and uncle instilled us with pride in our Souh Asian roots.”

“I was also very close to my mother’s brother, Balu, and her two sisters, Sarala and Chinni (whom I called Chittis, which means ‘younger mother’ [in Tamil]),” she recalled.

Her uncle, G Balachandran is a retired academic, who has a PhD from the US. Her aunt Sarala is a retired obstetrician and the other aunt, whose formal name is Mahalaxmi, was an information scientist in Canada.

She made a humorous video with actor-director Mindy Kaling about making masala dosaiAand it was released during her campaign for presidential nomination.AA

Her father P V Gopalan was born in Painganadu in Tamil Nadu and joined government service under the British and his work took him and the family to Mumbai, Kolkatta, Delhi and Lusaka, Zamibia, before he retired to Chennai.

Harris writes that her grandfather had also been a “freedom-fighter.”

She recalls visiting him as a child in Luska, where he had been sent by the Indian government in the late 1960s to help that young nation deal with a refugee crisis brought on by a renegade White supremacist government breaking away from Britain in neighbouring Southern Rhodesia, which became Zimbabwer after overthrowing them.

Shyamala Gopalan moved to Canada to teach at McGill University in Montreal when Harris was about 12. Harris rounded off her international exposure going to high school in Quebec. But returned to the US to study at Howard University, an African American institution in Washington.

But she does not have appear to have close ties to her father.

When she was asked the about 1,900 convictions her office obtained for offences relating to marijuana when she was the San Fracisco prosecutor, she admitted smoking it and reportedly joked, “Half my family’s from Jamaica. Are you kidding me?”

Her father rebuked her saying, according to Jamaica Global, “Myself and my immediate Jamaican family, we wish to categorically dissociate ourselves from this travesty.”

He accused her of bringing up “the fraudulent stereotype of a pot-smoking joy seeker and in the pursuit of identity politics.”

The publication said that according to some Jamaicans, “Harris tends to downplay her Jamaican heritage when it suits her, crediting her Tamil Indian mother with the most significant influence on her life and outlook and rarely talks about her father’s influence. Her father Donald, hardly ever gets credit except when mentioned alongside her mother, but rarely as an individual.”

In this, there are echoes of the life stories of the last two Democratic presidents, Bill Clinton and Barack Obama. Their fathers were divorced from their mothers and virtually estranged from them.