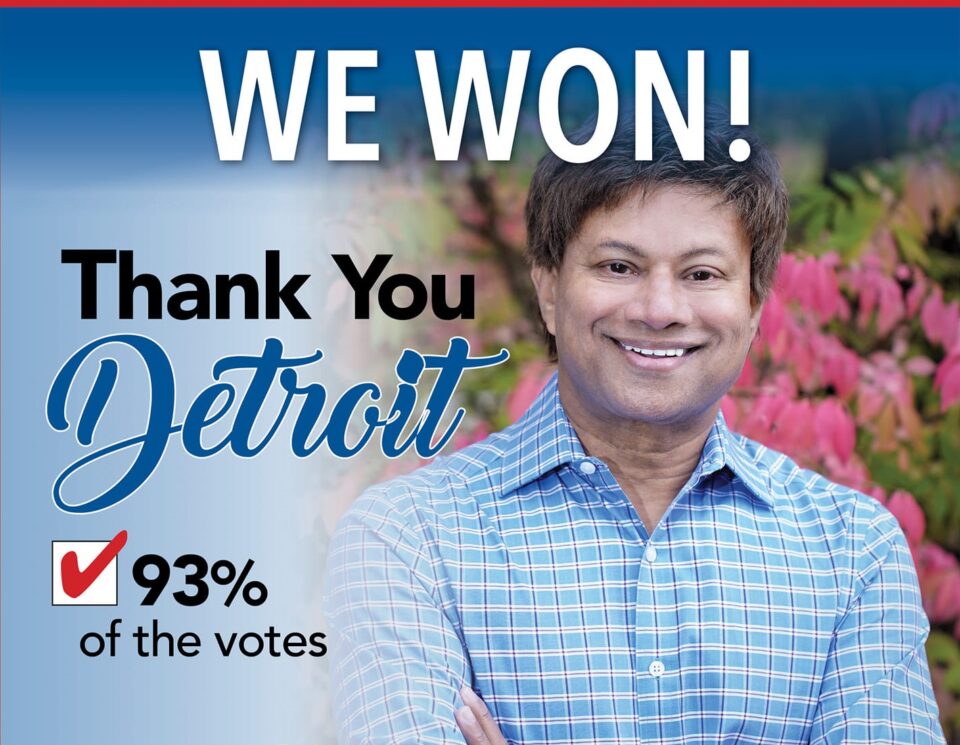 Bengaluru, Nov 5 (IANS) Karnataka-born entrepreneur Shri Thanedar was elected to the House of Representatives in Michigan state legislature in the US Midwest, with 93 per cent votes as a Democrat.

“Thank you for your support and votes in this important election. I am humbled and grateful for the support from the residents of Detroit’s third district, my family, my team and my friends,” tweeted Thanedar after the results were declared on late Wednesday night in the US.

Thanedar (65) was born on February 22, 1955 at Belagavi in the southern state’s northwest region. He migrated to the US in 1979 for a PhD in Polymer Chemistry from the University of Akron in Ohio state in 1982 after Master’s in the University of Bombay in 1977.

Promising to do all he can to improve the quality of life for all, Thanedar said he alone won’t be able to do much without the active participation of the people in the state.

Thanedar raised a record $438,620 for his campaign in the state House primary against six opponents of his Democratic Party.

In an interview recently to the local media, Thandear said he launched his campaign last fall before the Covid pandemic invaded the country and distributed face masks, hand sanitizers and door knockers.

“I want to tackle the challenges plaguing the district, including blight, water shutoffs, foreclosures, crime and unemployment. I’m seeing people have no hope. Conditions are really bad and nothing has changed in years,” he said.

The Indian-origin American millionaire also ran for the Governor of Michigan post in the 2018 election. He spent about $10 million of his fortune to finish third behind Governor Gretchen Whitmer and Abdul El Sayed in the 2018 gubernatorial primary, though he won the most votes in Detroit.

“Earlier, Thanedar worked as a post-doctoral scholar at the University of Michigan (1982-1984) and worked as a Polymer Synthesis Chemist and project leader at the Petrolite Corporation at St. Louis in Missouri state from 1984 to 1990,” according to his Linkedin posting.

In 1990, Thanedar worked and acquired a service firm Chemir and steered it to a $63-million company with 400 employees from $150,000 revenue in a few years. He is also known to have turned around eight ventures into profitable firms.

Growing up as one of six children in a low-income family in Shapur suburb of the border town, Thanedar learnt about the importance of education and the need to be financially independent at a young age. Though he passed in high school board exam in second division with 55 per cent marks, he managed to secure a job in a bank in the neighboring district of Vijayapura (formerly Bijapur) in the state’s northern region.

Niraj Antani (29) is another first Indian-American to be elected to the Ohio state Senate as a Republican, defeating Mark Fogel of the Democratic Party.