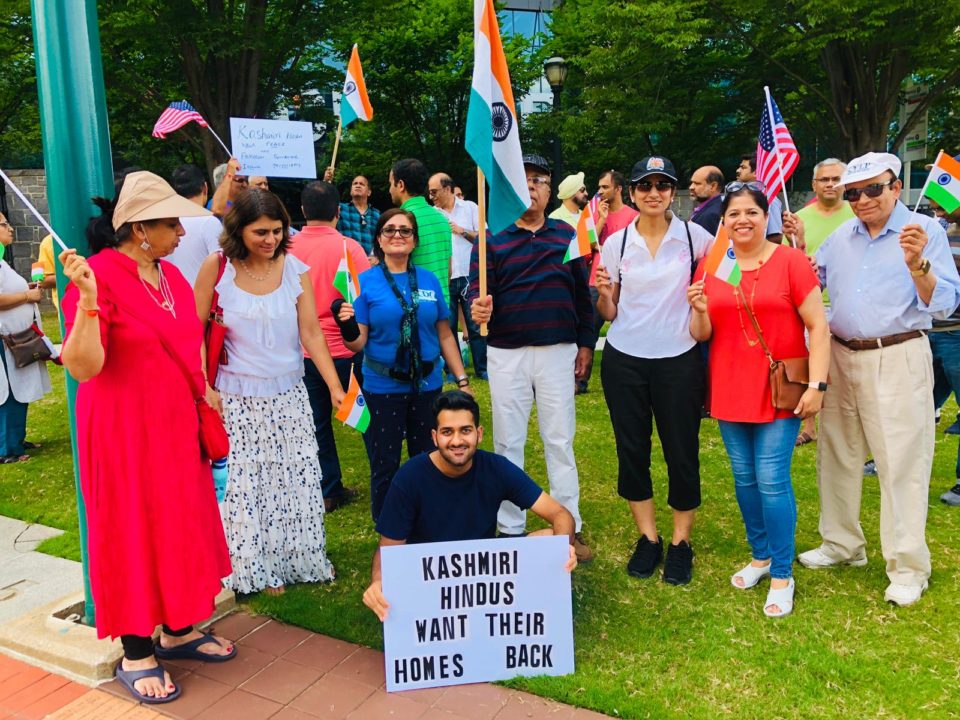 Atlanta, GA, September 9, 2019: Kashmiri Hindus/Pandit community, Sikhs, and leaders of Federation of Indian American Associations (FIA) of GA, along with several Indian American community members in Atlanta held a rally in support of J&K reorganization bill at the Centennial Park near CNN Building in Atlanta on August 18, 2019.

The crowd applauded Government of India’s (GOI) decision on August 5, 2019 to abrogate articles 370 and 35A of the Indian constitution, bifurcating J&K into two union territories, Jammu and Kashmir and Ladakh and scrapping of the special status to the northern state of Jammu and Kashmir (J&K), including a separate constitution and autonomy over internal administrative matters.

Article 370 of the Indian constitution gave special status to J&K in October 1947, when the then J&K Maharaja Hari Singh had acceded to India on matters of defense, foreign affairs and communications, just as the other princely states. While rest of the princely states merged with mainstream India, J&K did not, due to its temporary special status.  The government of India revoked this special status in August 2019 through a Presidential Order and the passage of a resolution in Parliament.

“The rally across CNN was symbolic of reminding the western media to play a responsible role to give peace an honest chance in J&K without the smack of yellow journalism in this internal matter of India,” stated a joint press release received from Subash Razdan, and Dijjotam Raina, both Atlanta residents of Kashmir ancestry. The release also stated that these temporary articles related to the former State of J&K needed these modifications as they were highly discriminatory against almost all Kashmiri minorities including Shia Muslims, Dalits, Gujjars, Kashmiri Pandits, Kashmiri Sikhs, and many more other than the exclusively privileged political families such as the Abdullahs, the Muftis, etc. of J&K.

“Once everything is finalized, we will have a Gujarati Dharmashala there, free for all,” said Vasudev Patel, organizing secretary of the Overseas Friends of BJP, present at the rally, underlining the fact that non-residents of J&K would be free to invest, post the revocation.

Speakers at the rally recalled instances of their own family members having had to relocate overnight. They went to narrate personal stories of hapless exodus and yearning to go back to their homes which they left behind in 1990. “All those present believed that under this new freedom courtesy Modi Government, India’s Hindus, Muslims, Sikhs, Christians and other minorities will now have a better chance to be equals before the law!” states the press release.

“These laws were even anti-woman when it came to equality in rights to own/transfer of ancestral property if the daughter of domiciled J&K married a non-Kashmiri. This reorganization attempts to redress the restrictions on employment, acquisition of property, civil rights, improve governance and investment opportunities,” states the release with speakers echoing a similar opinion at the rally.

A recent press release from Embassy of India in DC states that J&K will fill up 50000 vacancies in various government departments in the next few months.

This was announced by Governor Satya Pal Malik at a press conference held at Raj Bhavan on August 28, 2019. He stated that the National Agricultural Cooperative Marketing Federation of India Limited (NAFED) will commit to over Rs. 5000 Crores for apple procurement in Valley. The Governor stated that restoration of normalcy and deepening of democracy remained the government’s priority and as a first step, elections to Block Development Councils would be conducted and completed before the end of October, adding that it had also been decided to open up mobile phones in all 10 districts of Jammu (barring one location) and the entire revenue district of Kupwara and Handwara Police districts in the Kashmir valley. He also assured people that the Government would take every step to ensure that the heritage, language and identity of the region would be preserved and protected and that no assault of any kind would be allowed on its culture.

Sisters raise funds for charitable causes at their Arangetram