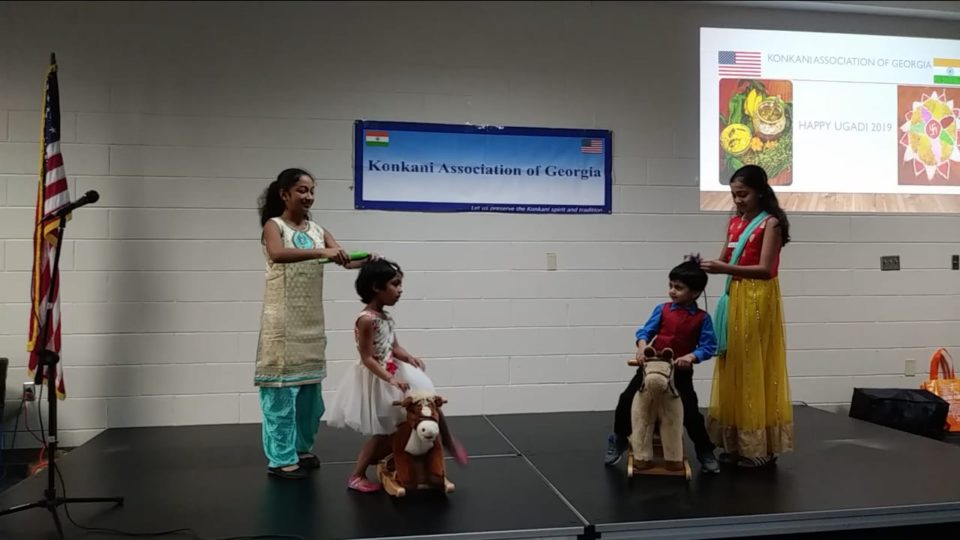 Atlanta, GA, May 10, 2019: The Konkani Association Of Georgia (KAOG) celebrated their annual Yugadi celebration on April 6th at Roswell Center.  Yugadi is an important festival celebrated in most parts of India with different names. As the word translates, ‘Yuga’ is Era and ‘Adi’ is the beginning, hence beginning of the New Year. It is based on the Hindu calendar and occurs mostly in March-April. This year, it fell on the actual day of the KAOG celebration.

The festivities began with a welcome address by president Murali Shenoy, followed by a couple of bhajans sung by a varied group and Sanskrit shlokas by a group of children,. The MCs were two teenagers Diya Kamath and Tanvi Shanbhag, who conducted proceedings with flair and confidence. As always, the kids’ performance stole the show.

In the first instance, the kids rocked, literally – it was a dance to “Lakdi ki Kaati” from the 80s’ movie Masoom by Ananya Shenoy and Viraj Bhandarkar, all of four years old, with cameos by their families on stage. The second was a skit enacted by Lavanya Shenoy and Shreya Hegde, both in their pre-teens, with the entire dialog in Konkani, scripted by resident playwright Banur Nageshrao, whose talents are always tapped at such events.

Weaving through the skits were Hindi songs by serious talents Rohan Ullal and Pratibha Nayak, and English songs by Neha Shabhag and Arya Nayak. Suresh and Viju Bhat shed the years with delightfully rendered songs which had the audience marveling at the spirit of the seniors! Sudha Shenoy gave an update on the next Konkani Sammelan planned for 2020 in San Jose, CA. The post-lunch program was anchored by Konkani Jeopardy, an apt choice to ward off post-lunch stupor, with sharp questions in all categories Konkani – culture, places, food, icons and trivia. It was conducted by Arvind Benegal. The gathering was divided into teams along gender lines. The men’ team shot off the blocks and worked up a nice lead, but the script was familiar – they gave it all up (distracted probably by the tea and snacks) and the women’s team slowly but surely inched past them at the end!

Per the tradition since the beginning of KAOG, the main part of the celebration was lunch, comprising traditional Konkani delicacies cooked by enthusiastic volunteers. The cuisine of the Konkan coast is among the most varied and diverse of all Indian cuisines, using a mind-boggling array of vegetables and leaves, both edible and used for flavoring. Much of it was on the menu, which has become an annual traditional treat that is rife with anticipation by all members.

It was a new beginning for a Go Green KAOGA #GoGreenKAOGA initiative that was established – members were encouraged to BYOP bring their own plates and silverware to cut down on the use of plastic plates and tableware. The initiative was aimed at reducing our carbon footprint and aiming towards zero landfill. The call generated an enthusiastic response, with approximately four in five people participating. The benefits were multifold: the general feel-good of participating in a community initiative that lessens environmental impact form plastic, and the fact that the home-cooked gourmet dishes tasted better on steel plates with silverware, doing more justice to the skills of the volunteer preparers. The success has generated a robust discussion on ways to sustain it on a permanent basis. It has also set an example for other associations to follow, and the collective impact due to lower use of single-use plastic could be enormous.

The KAOG was formed in 2000, when a few families who have been meeting informally decided to form an association. Member events typically occur three times a year – Yugadi celebrations in March/April, a summer picnic in an outdoor setting, and Diwali celebrations in October/November. There are about 60 active families in the Atlanta metro area, and the few families strewn across Georgia enthusiastically make the trip for each of the events. This year’s celebration has set off a positive vibe for the other events over the year.