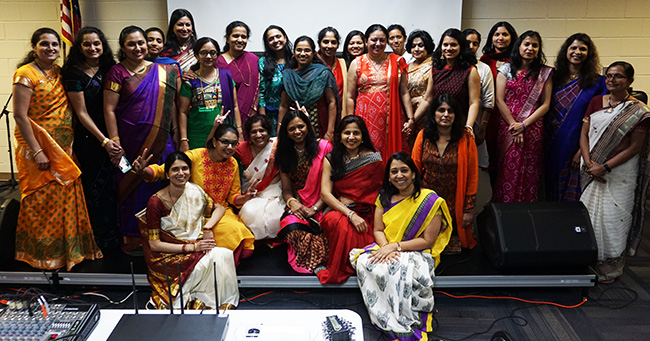 Atlanta GA, May 7, 2017: The Konkani Association of Georgia (KAOG) celebrated their annual Yugadi celebration on April 22nd at Roswell Center. Yugadi is an important festival celebrated in most parts of India with different names. As the word translates, ‘Yuga’ is Era and ‘Adi’ is the beginning, hence beginning of the New Year. It is based on the Hindu calendar, and occurs mostly in March-April. KAOG generally holds its celebration in the third Saturday of April.

This year at KAOG, the festivities began with the welcome speech by president Sarita Bhat and invocation by Mihika Jalisatgi followed by a devotional song by Raghvendra Kamath. Vice President Sanjay Rao conducted a marvelous, inventive and informative game. People were invited to share their Yugadi experiences back in India, growing up, with the intent of transmitting those experiences to children who have grown up in the US. The anecdotes were related in a slideshow with attractive visuals. But that was not all – they were also requested to provide old photographs, so it extended into a game for a small pool of children, and of course for the audience. 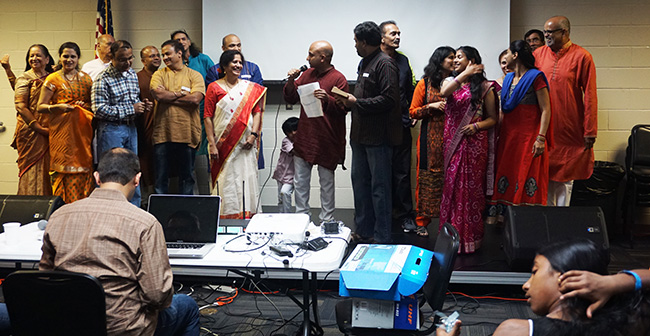 The festivities continued with an entertaining mother-daughter skit by Sushma and Lavanya Shenoy, written by resident playwright Banur Nageshrao, whose talents are always tapped at such events. Following the skit was a game of completing half-provided Konkani proverbs conducted by Ravi Nayak, with bonus points for illustrating these ingenious sayings with examples. Three teams tied for the leading spot, and the tie-breaker didn’t happen for lack of time. No one begrudged that there was no declared winner, for it was occasion to savor the richness and depth of the Konkani language that produced these wonderful sayings.

It was then time for a different kind of savoring. Per the tradition since the beginning of KAOG, the celebration ended with dinner comprising traditional Konkani delicacies cooked by enthusiastic volunteers. The cuisine of the Konkan coast is among the most varied and diverse of all Indian cuisines, using a mind-boggling array of vegetables and leaves, both edible and used for flavoring. Much of it was on the menu, which has become an annual traditional treat that is rife with anticipation by all members.

The KAOG was formed in 2000, when a few families who have been meeting informally decided to form an association. Member events typically occur three times a year – Yugadi celebrations in March/April, a summer picnic in an outdoor setting, and Diwali celebrations in October/November. There are about 60 active families in the Atlanta metro area, and the few families strewn across Georgia enthusiastically make the trip for each of the events. 2016 was a unique and highly eventful year for, KAOG – in July, the association was host to the quadrennial North American Konkani Sammelan, which was attended by over 1400 people from all over the world, in Atlanta. After the hectic activity and excitement of 2016, it is another ‘normal’ year that the Yugadi celebrations kicked off, for a community that has become closer, having worked together closely to conduct a successful Sammelan.