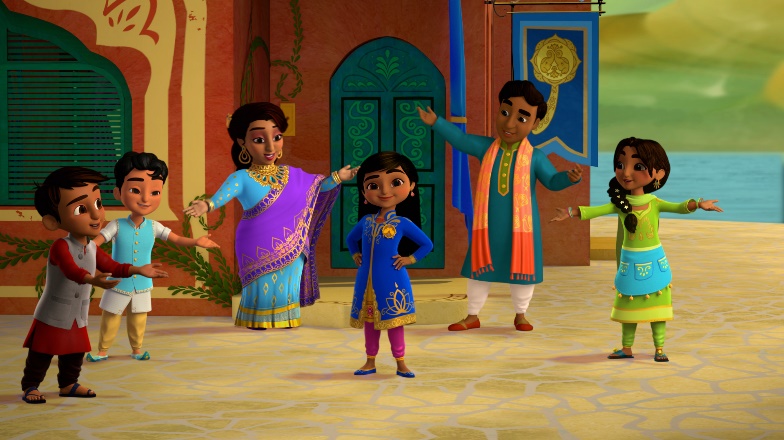 In celebration of Asian Pacific American Heritage Month, Disney Junior will debut three new episodes and a new short-form interstitial series of its hit animated series, “Mira, Royal Detective,” about a young girl who is appointed to the role of Royal Detective and travels throughout the magical Indian-inspired kingdom of Jalpur solving mysteries for her friends and family. Highlighting key cultural themes like the importance of family, food and traditions, the episodes will premiere the first three Fridays in May (MAY 1, MAY 8 and MAY 15) at 11:00 a.m. EDT/PDT on Disney Channel, and will also be available on Disney Junior and DisneyNOW. Kunal Nayyar (“The Big Bang Theory”) and Rizwan Manji (“Schitt’s Creek”) guest star in the episode debuting Friday, May 15.

Also premiering in May is a new short-form interstitial series titled “We’re on the Case,” which follows Mira and her mongoose friends, Mikku and Chikku, as they embark on mystery-solving adventures for young viewers to follow along at home that highlight the vibrant culture and heritage of India. The first short debuts FRIDAY, MAY 1 (7:24 a.m. EDT/PDT on Disney Channel and 9:18 a.m. EDT/PDT on Disney Junior) and centers on the peacock, the national bird of India.

In addition, Disney Junior will spotlight series’ choreographer Nakul Dev Mahajan who will take viewers behind the scenes of the series’ Bollywood music video and Disney Channel will introduce viewers to Leela Ladnier, the voice of Mira, in on-air interstitials that will air throughout the month.

The May programming highlights for “Mira, Royal Detective” are as follows (all episodes premiere at 11:00 a.m. EDT/PDT on Disney Channel):

“The Mysterious Polo Player/The Case of the Secret Treasure” – In the first story of the episode, Mira is determined to figure out the identity of a mysterious polo player. Then, Mira and her friends find a treasure map that leads to mysterious tunnels under the palace.

“The Case of the Chiseling Chiselers/A Patchwork Mystery” – When the royal sword goes missing, Mira agrees to help Veer find it. Then, when a tapestry that Priya created for Jalpur’s anniversary celebration is nowhere to be found, Mira sets out on the case to find it before the party begins.

“Mystery at the Marketplace/Mystery in the Sand Dunes” – Meena and Priya want to make special ladoos for their father Naveen’s homecoming party, so Mira must help them track down the spice merchant, Mr. Khan, who has an essential ingredient. *Kunal Nayyar (“The Big Bang Theory”) andRizwan Manji (“Schitt’s Creek”) guest star as Naveen and Mr. Khan, respectively. While testing Neel’s new vehicle in the desert, a sandstorm causes it to become lost.