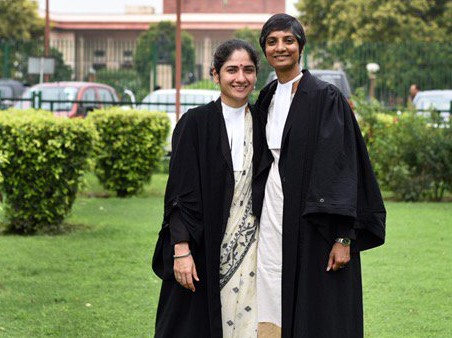 Atlanta, GA, July 24, 2019: Indian lawyers Menaka Guruswamy and Arundhati Katju who spearheaded the legal challenge to strike down Section 377 of the Indian Penal Code that made consensual gay sex illegal, have come out as a couple.

In an interview with CNN’s Fareed Zakaria, the two lawyers admitted that they were a couple. They said the victory was not just a professional benchmark but also a personal win, reports News18.

Katju and Guruswamy represented the petitioners against the ban on consensual gay sex in the country. The duo highlighted those who suffered under the law by enlisting more than two dozen gay, lesbian, bisexual and transgender people as co-petitioners.

They contested that people risked arrest for publicly identifying themselves as part of the LGBTQ (lesbian, gay, bisexual, transgender, queer) community.

Talking to Zakaria about  September 6, the day when Section 377 was finally repealed, Katju said that the best thing that happened after the verdict was that they could celebrate together with her parents, who had come down to court to watch her and Guruswamy fight the case.

Katju is the niece of former Supreme Court judge Markandey Katju. She was also a junior under senior advocate Sidharth Luthra in the Supreme Court.

Guruswamy is the daughter of Mohan Guruswamy, a well-known political-thinker and adviser to former Prime Minister late Atal Bihari Vajpayee.

Noted actor Priyanka Chopra wrote a profile for Katju and Guruswamy in TIME magazine after it released the 100 most influential people’s list earlier this year.

“Arundhati and Menaka have helped take a giant step for LGBTQ+ rights in the world’s largest democracy. In their committed fight for justice, they have shown us that we as a society must continue to make progress, even after laws are changed, and that we must make an effort to understand, accept and love,” Chopra wrote.

In September 2018, a constitutional bench of the Supreme Court partly struck down Section 377 in a unanimous decision. The judgement was considered groundbreaking, as the country’s top court finally overturned a colonial-era ban imposed on consensual gay sex. The judgement was regarded as a welcome step in affirmation of human dignity.

Katju and Guruswamy contended before the court that sexuality and its expression, in fact, were fundamental human experiences, and Section 377 enabled discrimination, which was against the fundamental right of an individual.


Senior advocate Guruswamy is a graduate from the National Law School of India University (NLSIU), Bangalore, and a Rhodes Scholar. In September 2017, a portrait of her was unveiled at the Rhodes House in Oxford University.

She holds an LLM degree from the Harvard Law School and D.Phil from the Oxford University. She also featured in the 6th Harvard Law International Women’s Day Portrait Exhibit earlier this year.

She has been a visiting faculty at the Yale Law School, Columbia Law School and New York University School of Law. Most recently, she was a fellow at the Institute of Advanced Studies in Berlin for 2016-2017.


Katju too is a graduate from NLSIU, Bangalore, and holds an LLM degree from Columbia Law School where she was a human rights fellow, James Kent scholar and public interest honoree.

She is a visiting faculty at the National Law University, Delhi. She also served as a panel lawyer for the Delhi High Court Legal Services Committee. She specializes in representing child sexual abuse victims.