Atlanta, GA: AIM for SEVA, Georgia Chapter and Samarpanam School of Fine Arts presented Spanda, a dance production, choreographed by Padmashree Leela Samson at the Robert Ferst Center for the Arts, GA Tech on April 28 2013. The event, a fundraiser for AIM for SEVA had over 700 supporters in attendance.  Hon. Consul General Ajit Kumar graced the event.

Hon. Ajit Kumar in his address, described Leela Samson as a world-renowned artist. ‘Spanda’, as described by its makers, seeks to establish a relevant dialogue between dance, music and stagecraft. ‘Spanda’, (a vibration) is symbolic of the enduring and perpetual energy that is the life force of the universe. It incorporates the philosophical concept of Prithvi as the center and source of energy in the universe and equates it with the nabham, the womb as the origin of energy in the human body. 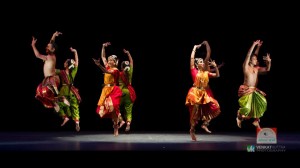 Eashwar Money, who overlooks AIM For SEVA, Georgia Chapter made an earnest appeal to the audience to support the cause. A couple, Ramesh and Jyothi Patel who had actually visited and stayed at an AIM For SEVA location in Kankanpur, Gujarat shared their experience with the crowd. AIM for Seva addresses the challenge in educating rural and tribal children through the concept of Student Homes (Chatralayas) which are located in close proximity to Government run schools, thereby leveraging already existing school infrastructures. At no cost to parents, the Chatralayas provide the accommodation, clothing, medical care, after school tuition, field trips and academic supplies. Swamini Sadhviji, also present at the event explained the working of AIM for SEVA and its centers, adding organization has constructed 100 chatralayas across 15 states, impacting 20,000+ students and 100,000 families. An inspiring journey of a previous student of one of Chatralayas – Sheetal Pundir who is a PhD Student at Northeast Cancer Centre in Canada was also aired. The organization has many more success stories including Kolli Raju Babu, who is a Post Graduate in Biotech and a Quality Assurance Executive in a Pharma Company in Hyderabad. His mother Nokaratna worked in the fields to support her two sons and AIM For SEVA came to her rescue. An alumnus of Kalakshetra, Leela Samson learned Bharatanatyam under exceptional teachers and was guided by the founder, Rukmini Devi Arundale. Starting her career as a Bharatanatyam soloist, Leela taught at Shriram Bharatiya Kala Kendra, Delhi and Gandharva Mahavidyalaya, Delhi. Over the years, she has performed at leading festivals across India, Europe, Africa, and the Americas. Leela has also appeared at the Lincoln Theater in Washington DC and has performed for Queen Elizabeth in London. She also has various credits including, Sanskriti award by the Sanskriti Foundation in 1982, Padma Shri award by the government of India in 1990, Nritya Choodamani award by the Sri Krishna Gana Sabha Foundation in 1997, Sangeet Natak Akademi award by the National Academy for Music, Dance and Drama, government of India in 2000, and Kalaimamani award by the Tamil Nadu State, India in 2005. Leela shuffles between her many roles of dancer, writer, teacher, mentor, and choreographer. She was also offered two appointments. In August 2010, the President of India appointed her as chairman of Sangeet Natak Akademi, New Delhi. In April 2011, the central government appointed her as chairperson of the Central Board of Film Certification. Samson recently authored a widely acclaimed biography of dancer and social activist Rukmini Devi Arundale.

Conceived /Choreographed by Leela Samson and launched in 1995, Spanda is said to have an evolving repertoire. Scintillating formations in synchronous, synergistic harmony made ‘Spanda’ a visual treat for the viewers. “Leela Samson believes in the cause of Empowering Children by educating them and believes in the Movement.S he is working closely with Sheela Balaji, Managing Trustee, Aim for Seva on the 100th Chatralaya inauguration in 2013/2014. She is also helping to bring pure form of arts – Music, Dance & Theater to the Anaikatti Chatralaya, School & College. On this project she has introduced teams that visit Anaikatti and has encouraged her teams to visit villages and perform in the temples like olden times, so that the families of these children get an exposure to the Indian Fine Arts.” said Shobha Eashwar, one of the organizers.

The program concluded with a thank you video from the students of the Chatralaya. Founded in 2000 by Swami Dayananda Saraswati, AIM For SEVA strives to bring value based education and health care to the least privileged sections of the Indian society. Child Sponsorships are welcome throughout the year.  For more information, you may visit http://www.aimforseva.org/.