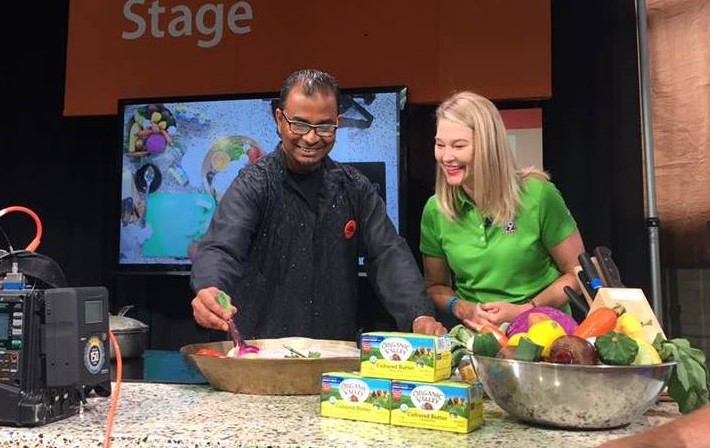 Washington, DC, May 29, 2020: Amid protests on Thursday night following the death of an unarmed black man, George Floyd, while in the custody of Minneapolis cops, popular Indian restaurant Gandhi Mahal was burned and damaged.

“Let my building burn. Justice needs to be served, put those officers in jail,” his daughter Hafza quoted him as saying.

“Sadly, Gandhi Mahal has caught fire and has been damaged,” Hafza’s post on the Gandhi Mahal Facebook page said. “We won’t lose hope though, I am so grateful for our neighbors who did their best to stand guard and protect Gandhi Mahal, your efforts won’t go unrecognized.”

“Don’t worry about us, we will rebuild and we will recover. This is Hafsa, Ruhel’s daughter writing, as I am sitting next to my dad watching the news, I hear him say on the phone; “let my building burn, justice needs to be served, put those officers in jail”.

“Gandhi Mahal May have felt the flames last night, but our fiery drive to help protect and stand with our community will never die! Peace be with everyone,” she added.

Gandhi Mahal is located across the street from the Lake Street and Hiawatha Avenue AutoZone, which was burned to the ground on Wednesday night as part of the George Floyd protests, reports CBS.

Many small businesses in the area were also damaged, but neighbors in the area have volunteered to assist with clean-up.

Ruhel Islam’s stance was supported by many. “Ruhel Islam has been a pinnacle of the South Minneapolis community. Supporting students, families and leaders. When you are ready to rebuild, we will be there for you!,” one Minneapolis resident said on Facebook.

“For those whose business got affected, learn from one of our leaders and my friend Ruhel Islam about how he supports the community, as his building is being damaged. Nothing but respect. We will build it together and (see it) becomes better than before,” another resident said.

Meanwhile, fired Minneapolis police officer Derek Chauvin has been arrested four days after Floyd’s fatal arrest that sparked the protests, and outrage across the US.

Hennepin County Attorney Mike Freeman announced he has been charged with third-degree murder and manslaughter.

Minnesota Governor Tim Walz had earlier declared a state of emergency and activated the National Guard to restore order after protests resulted in widespread damage and looting in Minneapolis city.

George Floyd died on Monday evening in Minneapolis shortly after a white police officer held him down with a knee on his neck though the victim repeatedly pleaded, “please, I can’t breathe” and “don’t kill me”, reports Xinhua news agency.

The four officers involved in the case were fired shortly after a video showing Floyd’s death went viral on social media on Tuesday, sparking a national outcry for justice.

“George Floyd’s death should lead to justice and systemic change, not more death and destruction,” Walz said in a statement.

“It is time to rebuild. Rebuild the city, rebuild our justice system, and rebuild the relationship between law enforcement and those they’re charged to protect.”

The National Guard Adjutant General will work with local government agencies to provide personnel, equipment, and facilities needed to respond to and recover from this emergency, according to a report from local newspaper Star Tribune.

In addition, the Minnesota State Patrol will supply 200 troopers. State Patrol helicopters and other aircraft will also be available to assist law enforcement officers on the ground, said the report.

Wednesday night’s protests began peacefully and escalated into gunfire and arson, with about 30 buildings reported ablaze, and countless others damaged, said the report.

Amid national outrage over the incident, House Speaker Nancy Pelosi said on Thursday that Floyd was “murdered” at the hands of the Minneapolis Police Department.

“We saw it on TV – him being murdered on TV,” Pelosi told reporters in the Capitol.

Appearing on CNN later in the day, the top Democrat called Floyd’s death “an execution”.

House Democrats are eyeing a variety of responses, including the adoption of more stringent federal policing standards and a pressure campaign on the Justice Department to get more aggressive in tackling the issue of police misconduct targeting African-Americans, according to a report of The Hill.

Besides Minneapolis, protests against the incident took place in some other US cities including Los Angeles and Memphis, local media reported.

The Justice Department said on Thursday it will make the case a “top priority”.