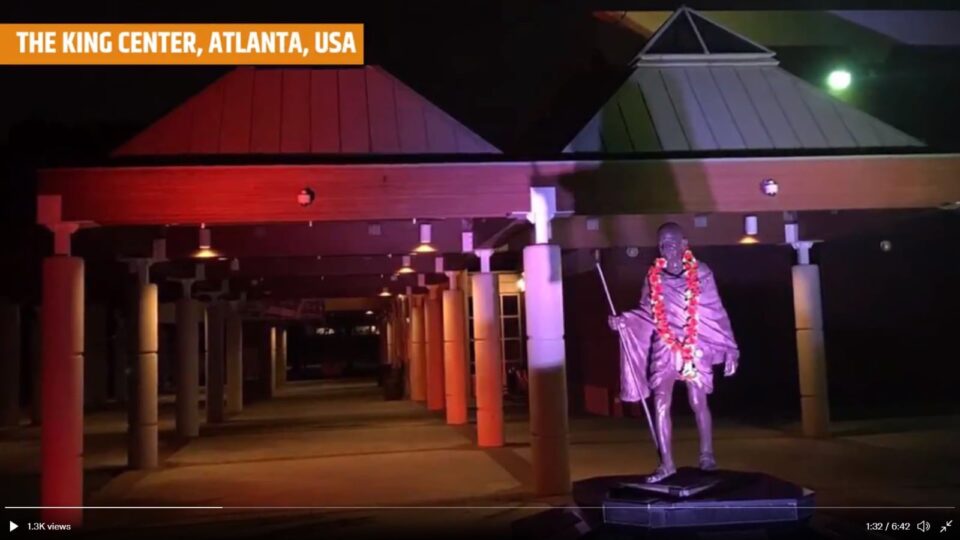 Atlanta, GA, August 27, 2021: A walk down the memory lanes of the hallowed Dr. M.L. King National Historical Park (KNHP) of Atlanta, may remind us of the ugly phase of slavery and segregation in the USA!  Yet, the same grounds of KNHP pulsates with the history of the civil rights movement inspired by Dr. M.L.King Jr. Memories of struggles for liberty, equality, and respect flash across vividly.

On the eve of August 15, the Consulate General of India in Atlanta along with the Gandhi Foundation of USA with due permissions from the National Park Service and the King Center endeavored to highlight the non-violent spiritual connection of King and Gandhi with the illumination of the tri-color lights of the Indian flag.

Mahatma Gandhi helped lead India’s Independence movement in the early 1900s. Gandhi, through his activism, organized peaceful protests against British rule. He inspired people all over the world, including civil rights leaders in the USA, in particular Dr. Martin Luther King Jr.

As you see in the pictures, the illumination during the night imparts its own strange hues to buildings old and new. Drive past the sweet Auburn Avenue rendered the impact of the freedom of plurality and diversity through powerful symbols of The Ebenezer Church, The King Crypts, the Freedom Hall, the King Birth home, the Eternal Flame, the Gandhi Statue , and many more that hold sway there.

Why August 15, 2021?:
Seventy-five weeks ahead of 75th Independence Day, Indian Prime Minister Narendra Modi launched the ‘Azadi ka Amrut Mahotsav’ on March 12 to mark 91 years of Dandi March, paying homage to Mahatma Gandhi and all the freedom fighters who set out on foot to break the repressive salt law.

India’s non-violent struggle for freedom and its belief in democracy, tolerance, and the rule of law has been an inspiration and beacon of hope for people around the world, including Atlanta’s very own Dr. Martin Luther King Jr., even though the two men had never met.

So how did Atlanta, which houses the Gandhi Room and the statue of Gandhi, pay tribute to India’s freedom struggle? As Subash Razdan, Chairman and Co-Founder of Gandhi Foundation USA (GFUSA) puts it, “Remembering Gandhi Ji and befittingly connecting Gandhi and King in spirit and deeds, by garlanding the Gandhi Statue and by lighting up the Gandhi Statue and the Freedom Hall (housing the Gandhi Room) in the hallowed grounds of King National Historical Park (KNHP) of Atlanta.”

The majestic Gandhi Statue vicinity and the historic Freedom Hall which houses the Gandhi Room/museum at the King National Historic Park in Atlanta glimmered in the glorious tricolor of the Indian Flag during the 75th Indian Independence Day Celebration of August 15, 2021. The lighting was created by Prashant Kollipara of Bytegraph Events.

“The inspiration and concept for GFUSA came from Dr. Swati Kulkarni, Consul General of Atlanta, India to connect Gandhi and King by lighting up the hallowed grounds of KNHP …I agreed that would be a most meaningful tribute of India’s freedom struggle through the eyes of Dr. MLK,” said Razdan.

“Being part of history related to Mahatma Gandhi and Dr. Martin Luther King Jr.. is a remarkable milestone for Bytegraph Productions,” said Kollipara.

The enthusiasm this time was palpable because it marked the launch of the start of the 75th anniversary of India’s Independence and the idea was amazing. But lighting up a statue and the park vicinity brought its own set of challenges, noted Razdan.

“KHNP comes under multiple administrations with different degrees of obligations – The National Park Services (NPS, Supdt. Judy Forte), King Center (Rev Dr. Bernice King – King’s daughter) and Ebenezer Church (US Senator Rev Warnock). So we set about getting due permissions/permits.” Time was limited, but long-term relationship of GFUSA with these entities paid off and permissions were obtained on time. “The Consulate General of India (CGI), Atlanta, and the lighting specialists Bytegraph (Prashanth K) obliged even with short notice,” Razdan remarked.

“The lighting of lights and the support therein was creative and indicative of the ongoing importance, respect and appreciation for all that Gandhiji stood and is relevant for even now,” Razdan observed.

The tribute to Gandhi at King Center was initiated as early as 1983 in Atlanta by the Indian American Cultural Association (IACA) and the Indian American Forum for Political Education (IAFPE). The concept of a tangible memorial, however, honoring Mahatma Gandhi in Atlanta took place in 1987 when the  Gandhi Room was opened at the King Center in a joint venture and guidance of Ambassador P. K. Kaul (Embassy of India)  and inspired by Mrs. Coretta Scott King and IACA, led by Razdan and Giriraj Rao.

Concurrently along with, The Gandhi Foundation of USA (GFUSA) ( http://www.gandhifoundation.us ) was co-founded by Giriraj Rao, Subash Razdan and a team of committed Atlanta community leaders on October 26, 1997 in preparation of the installation and dedication of the Gandhi Statue  (Jan 24, 1998)  at the Martin Luther King Jr. National Historic Park and to provide the continuity of the Gandhi-King connection. The current GFUSA team of Subash Razdan, Hon. Greg Pridgeon, Antony Thaliath, Mohsin Bharmal, K. Thrivi, Jitu Patel, Viren Mayani, John Naugle, Dr. Rekha Desai, Ravi Ponangi, Sanjay Pandya, Dr. Sujatha Reddy, and so many others continue to carry the torch to keep the messages of Gandhi-King relevant.

Ongoing outreach and promoting the messages of peace and non-violence of Gandhi-King:
“Mrs. Coretta Scott King (wife of Dr. King) , Ms Christine King  Farris (sister of Dr. King) and, later, Dr. King’s next generation of Martin Luther King III, Dr. Bernice King, Isaac Farris and even the staff of King Center and NPS especially NPS Supdt. Judy Forte have nurtured the partnership with the GFUSA/Indian community. This has naturally further enhanced and cemented with the launching of the CGI in Atlanta,” Razdan adds.

Gandhi-King Center in India:
In the spirit of her parents, Rev. Bernice King, CEO King Center inspired GRU-GFUSA to open a Gandhi-King Center at the Gandhigram Rural University (GRU), Dindigul, near Madurai in TN, India. The challenge was successfully executed by GRU Professor Dr. V. Raghupathy under the able guidance of the GRU Vice Chancellor. Incidentally, this university is the same university which was visited by Dr. King and his wife Mrs. Coretta Scott King (picture) in 1959 courtesy hospitality of GRU founder Dr. Soundaram Ramachandran

“The connection between Gandhi and King has been so strong, that a proposal to have a sister city relationship between Ahmedabad (Sabarmati) and Atlanta (King Center) was approved in principle by both the corresponding mayors of the two cities in consideration. It, unfortunately, had to be put on the back burner due to recession hitting Atlanta and the temporary shutdown of the International Affairs Office of City of Atlanta (COA),” says Razdan.  “We are hopeful of bringing this proposal to the front burner in the near future in the optimistic hopes of receiving formal approval with guidance and support from the appropriate authorities especially after the passage of the Senate Resolution 1248 ( https://www.legis.ga.gov/api/legislation/document/20072008/83099 ) adopted on March 28, 2008 on Indo-Georgia friendship which acknowledges with ‘pride the existence of a life-size bronze statue of Mahatma Gandhi at the King National Historic Park’” Razdan observed.

Stepping into its diamond jubilee, India stands proud on its ground and international waters. The historic success at Tokyo Olympics (Incidentally, the Empire State Building , NY also celebrated the countries competing in this years Olympics by lighting its famed tower with the colors of participating countries flags) stands testament to a resilient India and the robust Indian youth who delivered the holy grail of Olympic medals, which in the best of times, takes the struggle of a lifetime. But to reach its sporting glory, with the most successful run yet in 120 years of participation, reeling under devastating first and second waves of the pandemic, is the promise of an emergent India ready to take on the world.

One is in awe and wonder as it is here in Atlanta that the history of non-violent struggle led by Dr. M.L.King Jr. for Civil and human rights unfolds before the eyes as we now benefit from the perennial song of humanity, peace and tolerance which was missing in the past from the soils of USA. With Gandhi and King as emblems of peace and non-violence, the tricolor lit up the lives across the globe, especially in Atlanta!