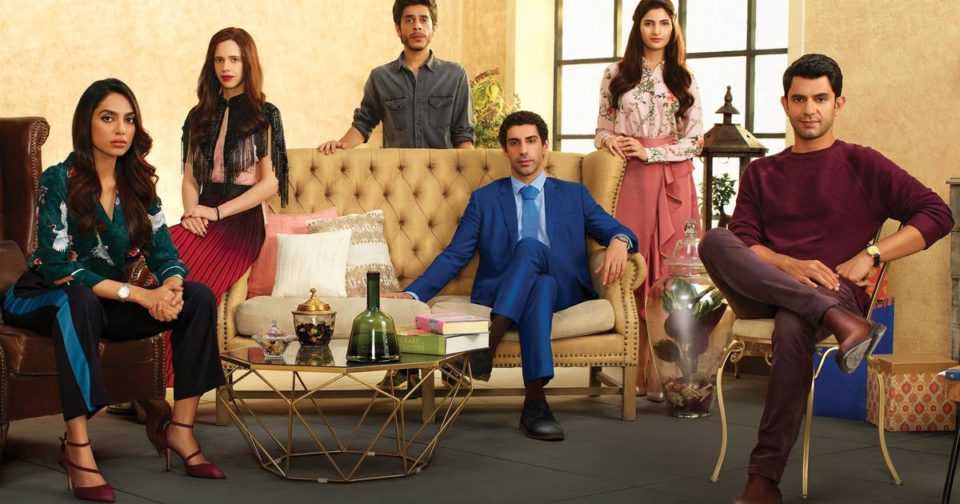 “Made In Heaven” (Amazon Prime)

First things first. “Made In Heaven” is the sexiest webseries India has produced, no doubt about it. The love scenes, both hetero and homosexual, look real with the actors letting loose the kind of unbridled physical passion that was so far forbidden in Indian cinema.

Welcome to the hormonal revolution.

In fact one of the earliest episode of this nine-episode entertainer had the protagonist Shobita Dhulipala and her screen-husband Jim Sarbh with their hands, legs and tongues all over the screen. Such lack of inhibition is the most refreshing. Bring it on.

Say hello to this bracing antidote to repression. Every major character in “Made In Heaven” is waiting to break free from one form of repression or another. Shobita’s character Tara who comes from a humble middle-class background, has married into money and now ‘money’ is cheating on her with her best friend. You can’t have your diamonds without sleepless nights.

Sleepless nights, reminds me of Arjun Mathur’s character Karan Mehra who is a closeted homosexual yearning to come out, grappling with emotional and financial problems. Together these two very fine actors, Arjun and Shobhita, plot and plan through a string of affluent weddings, lavish on both food and feud, fuelled by desire and desperation and a longing to find a more relevant core in their plush lifestyle than what is affordable to the senses.

Some of these characters are wretchedly unhappy. I mean, how successful can a marriage be when the wife-to-be sleep with a Bollywood superstar (wishful casting of Pulkit Samrat) who is invited to perform at her wedding? Or a tycoon’s sole male heir (the underused Pavail Gulati from the miniseries “Yudh”) who tells his parents that his wife is no goldigger and that the child she aborted in the past was his, when it was not?

Lies seem to fuel the passions of these inflamed characters. A simmering discontent underlines the well laid-out drama, like a still blue pool that whirls and swirls underneath. Accordingly, the truthful moments shine brightly in the series. There is this epiphanous encounter between our hero Karan and his snoopy landlord’s zany daughter (Yashaswini Dayama, wish there was more of her in the series) when he catches her smoking and reprimands her, and she tells him he shouldn’t stay out all night. They both know each other’s guilty secrets and are comfortable in their knowledge.

The writing (Reema Kagti, Zoya Akhtar, Niranjan Iyenger, Alankrita Shrivastava, Vivek Anchalia) is fluent and feisty. The dialogues hit the right notes without putting too fine a point on it. While the surfaces glisten with gloss, this is not a series that wallows in superficial glamour. Not by half.

Issues on societal hypocrisy (Arjun runs into a lover all set to marry an unsuspecting bride who when confronted hits back with, “Will you marry me?” )A run through the series creating a tingling spine of revelations on topics that cinema refrains from exploring.

The performances range from outstanding to satisfactory, and the quality doesn’t depend on the length of the character’s role. Shivani Raghuvanshi has less playing time than the other protagonists. But she nails it as a small-towner Jazz (real name Jaspreet), revelling in the life of the rich and the privileged. Though a brunt of sniggers, it is Jazz who often comes up with solutions in deadlocked weddings.

For all its an optical affluence and love for the lush, “Made In Heaven” tells us there is more to the working-class than meets the eye. This is a series you will want to watch all in one go. So set side a whole day for it and ignore “Captain Marvel” this weekend. A ‘Marvel’ is happening right in your homes. Take a bow, all you female directors (and one gentleman thrown in as token gesture). Your time starts now.