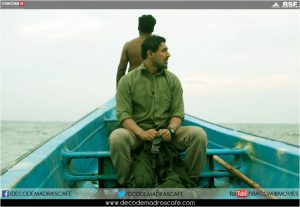 John Abraham in a still from Madras Cafe.

The buzz around John Abraham’s new film Madras Café is audible across the world as the tense political thriller is making headlines ahead of its international release on 23rd August 2013. Some pro-Tamil organisations have even called for a worldwide ban of the film.

Reacting positively to the critics John Abraham, who stars in the lead role as the Indian RAW intelligence security officer Captain Vikram Singh and whose production banner JA Entertainment co-produced the film, spoke out this week. The actor said that he was more than happy to clear any misgivings about the film and even to hold screenings for those people who have raised objections.

‘There have been a lot of enquiries from ruling parties and the opposition parties and the interest has increased and they want to see the film. We are ready to show it to them, but only when they watch it as viewers’, said John Abraham.

Director Shoojit Sircar has also agreed with John Abraham and has stated that the Central Board of Film Certification (CBFC) has cleared the film. He cited that he hopes that no groups would exploit the film for their political gain.

‘We have shown the film to the censor board, the biggest democratic body and they have cleared us. I think we should trust them and if someone wants to see the film, we will definitely show it to them’, Shootjit Sircar said.

Among the various factions demanding a ban of Madras Café is Naam Thamizhar (We Tamils), a Tamil activist group, which has sought a ban on the film for reportedly portraying Liberation Tigers of Tamil Eelam (LTTE) members as terrorists. Those in favour of the film include the Police Commissioner of Chennai, who has gone on record to say there is nothing wrong with the film and that the police will ensure a peaceful release of the film in Chennai.

Viacom18 Motion Pictures and JA Entertainment released a statement saying: ‘We have made a realistic film without been frivolous and over sensationalising anything as we believe that the Indian audiences are now looking for credible and realistic cinema. We have told a story, it’s our right of creative expression, we have worked hard to make this film. We only urge people to see the film without being biased and judge it on its merit and not politicize a creative product.’

Madras Café is a political action thriller set against the backdrop of the tumultuous and controversial Sri Lankan civil war of the 1980s. The film stars John Abraham as an Indian Army Intelligence Agent sent to Sri Lanka to break a resolute rebel group.  Once there, he meets a charismatic female journalist, played by Nargis Fakhri who is determined to uncover the truth about the civil war. Together the pair uncovers a deeper, sinister conspiracy by a faceless enemy.

Here is an earlier interview with John Abraham on Madras Cafe, his second movie as a producer.

Madras Café is your second movie as a producer. What are your thoughts on it?

My first offbeat comedy Vicky Donor got a good national and international success. Post this, I decided to do something more serious and choose a subject which is inspired by real life. After a lot of brainstorming we came up with the idea of creating a political thriller and that’s what we have done. I am quite happy with our work. Now just eagerly waiting for its release and to see how the audience reacts to it.

Vicky Donor gave you real success after a long time. Does it make you more over-confident?

I was quite overwhelmed with the responses we got for this movie. It was a transforming experience producing this movie. We all have been like a close knit team and worked very hard for it.  This success makes me more humble and grounded.

Tell us more about Madras Café?

Madras Café is close to my heart. It is a tense political thriller against the backdrop of the Sri Lankan civil war of the 1980’s. July 2013 marked the 30 year anniversary of the conflict, which finally ended in 2009 with the military defeat of the separatist Liberation Tigers of Tamil Eelam (LTTE). Madras Café provides a timely reminder of the gruesome conflict that claimed thousands of Sinhala, Tamil and Muslim lives and left millions of people displaced and desolate. The war’s impact was felt across the world with both Eastern and Western nations involved in the negotiations for a resolution.

What is your role in the film besides being the producer?

We also see Nargis in the film. What is her role?

Nargis plays a bold role in this movie. She is a journalist named ‘Jaya’. Vikram and Jaya together go about finding the truth amongst a complex web of lies and deceit, and begin telling the world their incredible story.

It is said that your look in the movie is inspired by Tom Hank’s look in Cast Away. Please comment.

Deciding on my look for the movie was quite challenging. It took lot of brain storming and we finalised this messy look, which apparently you think is inspired by Tom, but actually it’s not.

John as an actor and John as a producer. What’s your calling?

I was interested in an advertising career before modeling. So now, as a producer, I am exploring that potential of mine and I love it, though it is a huge responsibility. As an actor, I am very much engaged in the acting part as well. The critical point is the belief in the script which, of course, I have. It is quite close to my heart.

The kind of role that you are playing in Madras Café is quite different than what you have played in your other movies. How do you think it’s different?

We heard that you approached Freida Pinto for the role first, before taking Nargis onboard?

Yes, we did approach Pinto for the role. She loved the script but unfortunately she couldn’t accept the offer as she was doing another film at that juncture.

Do you think Madras Café could face controversy?

I don’t think so. This story is thoroughly researched from authentic sources. It cannot hurt the sentiments of Sri Lanka or Tamil Nadu, or in fact of   anyone who sees the film. It is surely inspired by true events but it doesn’t mean it should be banned or face controversies.

This is a false statement. Viacom 18 is the official producer of Madras Café.

Will Madras Café be released internationally?

We do plan to release the movie internationally, especially in Sri Lanka , to let the locals know that the movie is not anti Sri Lanka or anti Tamil.

US student calls India a traveller's heaven, a woman's hell