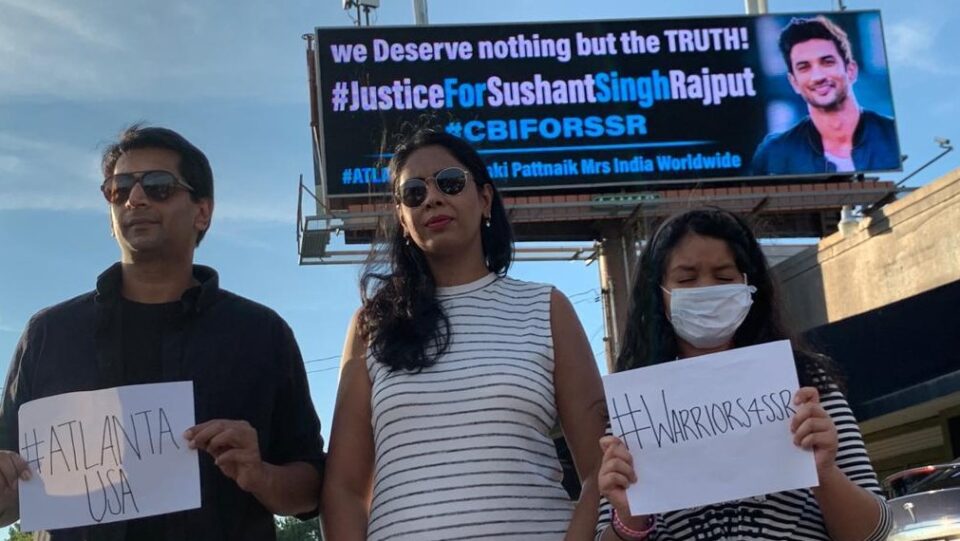 Atlanta, GA, August 27, 2020: During times when death is mere statistical data, it is difficult to fathom the idea that the death of a young actor in India can evoke empathy from people across the world. To believe it, just look at the recently installed massive billboard across the Global Mall, featuring Bollywood’s most promising and dearly departed Sushant Singh Rajput, demanding justice for the actor, bearing testament to his massive and faithful following across the globe.

Rajput’s untimely death shook the underbelly of Bollywood, unlike any other in recent times. The brilliant Sushant Singh Rajput, who kicked off his Bollywood career with an astounding performance in Kai Po Che had never looked back. Not in his performance anyway. But in a promised land where destinies are defined and defied by the box office every Friday, fame and failure are evanescent. Kismet connection plays a mighty role in the lives of Davids and the Goliaths of the industry who fill the film studios of Mumbai with their sweat and dreams.

On 14 June 2020, Rajput was found dead hanging from the ceiling fan of his home in Bandra, Mumbai, with the cause ruled as suicide. Amidst rumors and speculation, Mumbai Police had launched an investigation into his death. Conjectures including nepotism, mental illness, murder, theft, and more have surfaced since.

On July 25, 2020, Rajput’s father, K. K. Singh, filed a FIR at Patna where he lives, against actor Rhea Chakraborty and six others, including her family members, for abetment of suicide. He also accused them of wrongful restraint, wrongful confinement, theft, criminal breach of trust, and cheating. On 19 August, the Supreme Court allowed the CBI to take control of the investigation and ordered the CBI to look into any future cases registered in relation to Rajput’s death.

An unprecedented pandemic notwithstanding, Rajput’s death triggered a public outrage and demand for justice that jolted the system. The outpour of support even sailed across the oceans and reached Atlanta as well.

Before the Supreme Court order for CBI investigation came about, the demand for justice had spread far and wide.

“Atlanta has a large Indian American presence and we noticed that a lot of people here were keen to play a part in this movement and therefore we decided to stand in solidarity with Sushant’s family and all the people in India demanding a CBI probe,” said Abhijeet Takur who initiated the efforts for the actor’s Billboard across the Global Mall.

“We have been following this case and it’s coverage for the last two months over the Indian media channels especially Republic World. We noticed deep anguish amongst common people even in far off countries around this case and soon there were reports that people from California, Melbourne were joining this cause and raising awareness around this case by putting up large billboards in their respective cities,” said Takur about the origins of the idea.

The “shoddy manner” in which agencies investigated the unnatural death deeply saddened and hurt the sentiment of people, says Takur. The demand of the movement is a free, fair unbiased investigation by CBI to bring the culprits to justice and a possible expose of’ some of the unscrupulous activities in Bollywood, says Takur. “If people unite then it has the capability and strength to move mountains.”

Like many, Takur too felt a personal connection. “I personally felt a deep emotional connect with Sushant like millions of others. He was a bright young star, with exuberance and zest for life and the more you read about the way he achieved success in Bollywood is very inspiring. Beyond that he was a dutiful son and a loving brother to his elder sisters.”

“We have utmost faith in the CBI and are positive that the truth will come out,” believes Takur. No matter what the outcome may be, it is reassuring to know people care, when it matters most.