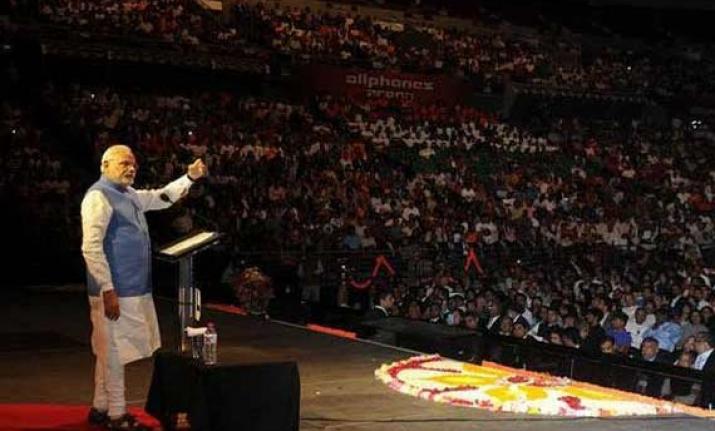 New York, July 13 (IANS) When Indian Prime Minister Narendra Modi visits the US in September for the Climate Action Summit convened by UN Secretary-General Antonio Guterres, he is expected to visit Houston to attend a massive Indian diaspora rally, according to a source familiar with the preliminary planning.

While his participation in the climate summit and the high-level General Assembly Debate was listed among his forthcoming foreign travel plans soon after his election in May, the Houston meeting is still to be officially announced.

The source added that it was not to be a party affair and would be organised by groups representing a cross-section of the diaspora in Texas to show his broad appeal to the Indian community in the US.

According to the 2010 census, Texas was the state with the fourth-highest number of people of Indian descent. The Pew Research Centre estimated that in 2015 there were 125,000 Indian Americans in Houston, where the Indian consulate is located, and 145,000 in Dallas-Fort Worth.

Always looking for opportunities to connect with Indian diaspora during his travels abroad, Modi has participated in three large community meetings – in New York, San Jose and Washington – during his previous visits.

The Climate Action Summit called by Guterres will take place on September 23, followed the next day by the high-level segment of the Assembly that lasts a week.

Therefore, Modi’s visit to Houston will have to take place either before the UN events in New York or after he has spoken at the general debate.

The UN says the climate summit is to “showcase a leap in collective national political ambition and it will demonstrate massive movements in the real economy in support of the agenda”.

Modi can expect a star role at the climate meeting as he has been repeatedly praised by Guterres for his work and future plans to fight climate change. Last year, Guterres presented him with the UN Champions of the Earth Award for Policy Leadership.

During the UN meetings, Modi will have an opportunity to meet several leaders.

US President Donald Trump and Modi are likely to meet on the sidelines General Assembly meeting as it is not certain if the former would attend the summit.

Modi’s visit this year will be the sixth to the US as Prime Minister.

He visited in 2014 for the UN session and addressed a community meeting of 20,000 people at the Madison Square Garden in New York. He also met then-President Barack Obama in Washington.

The following year, he attended the General Assembly session in New York and visited the Silicon Valley in California. Besides addressing a diaspora meeting of 20,000 people, he participated in an interaction with Facebook staff moderated by CEO Mark Zuckerberg at the company headquarters, and also visited Google headquarters.

Modi visited Washington twice in 2016. He attended the International Nuclear Security Summit convened by Obama on March 31 and April 1, and made an official state visit at the invitation of Obama. He addressed a Joint Session of Congress and participated in a community meeting.

In 2017, President Donald Trump invited him for an official state visit to Washington which took place in June.

As during his previous visits, a combination of self-proclaimed liberals and secularists, and Kashmiri and Khalistani separatists along with Pakistanis can be expected to hold protests against Modi.