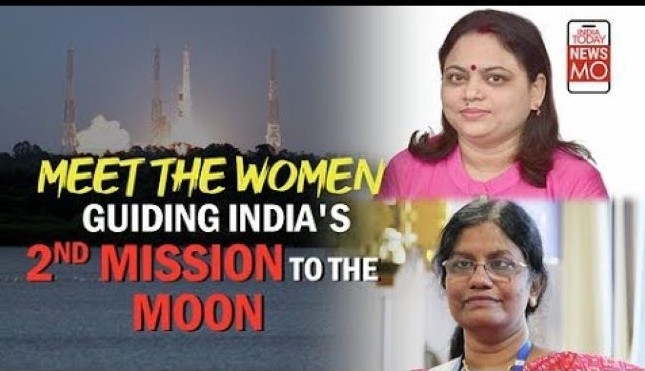 New Delhi, July 13 (IANS) India’s second Moon mission, Chandrayaan-2, has evoked great interest in Western media and scientific journals, with many saying the mission that costs less than half of the budget of Hollywood blockbuster “Avengers Endgame” will put India in league with lunar pioneers – the US, Russia and China.

The Chandrayaan-2 mission, that takes off exactly 50 years after the astronauts of Apollo II made their historic voyage to the Sea of Tranquillity on the Moon, will attempt a historic touchdown near the Moon’s south pole, “where water ice lurks in permanently shadowed craters”.

A good measure of women’s power is powering the mission, with the Project Director and the Mission Director also being women.

“Nearly 30 per cent of the members working on the Chandrayaan-2 mission will be women,” K. Sivan, Chairman, Indian Space Research Organisation (ISRO) had told the media earlier.

The Project Director is M. Vanitha, an electronics systems engineer, shouldering the entire responsibility of the Chandrayaan-2.

Mission Director Ritu Karidhal, a Master’s degree holder in Aerospace Engineering from the Indian Institute of Science, Bengaluru, was the Deputy Operations Director for the Mars mission.

“The total cost of the Chandrayaan-2 mission is about $124 million, which includes a $31 million price tag for the launch and $93 million for the satellite. The cost is less than half of the budget of Hollywood blockbuster “Avengers Endgame”, which had an estimated budget of $356 million,” says Sputnik.

The Guardian, in a piece titled ‘Everyone’s going back to the Moon. But why?’ writes: As the 50th anniversary of the first Apollo landing approaches, a host of countries are undertaking lunar missions. What’s behind the new space race?

“At 2.51 a.m. on Monday, July 15, engineers at India’s national spaceport at Sriharikota will blast their Chandrayaan-2 probe into orbit around the Earth. It will be the most ambitious space mission the nation has attempted.”

The New York Times, with a similar sounding headline, ‘Why everyone wants to go back to the Moon’, says, “For India, reaching the Moon would highlight its technological advances. China would establish itself as a world power of planet. For the United States and NASA, the Moon is now an obvious stop along the way to Mars.”

The US’ National Public Radio writes: “China, India and even smaller nations like Israel and South Korea are all pursuing robotic Moon missions. Their lunar ambitions are being driven both by a desire to flex their technological muscles and by the rise of global nationalism.”

The Washington Post, in an article titled ‘India’s Moon mission signals country’s growing space ambitions’, writes: “Although India’s space program began as early as the 1960s, it has gained new prominence under Prime Minister Narendra Modi… Modi has promoted the space program as a symbol of the country’s rising stature internationally and a bulwark of its defense capabilities.”

“India’s first Mars satellite cost less than the budget of the space movie, ‘Gravity’. At $141 million, the cost of the current lunar mission is far less than the $25 billion spent by the United States on its Apollo program,” the Post says.

Giving details of the Moon mission, the space.com website says: “Chandrayaan-2 consists of an orbiter, a lander called Vikram and a rover known as Pragyan. If all goes according to plan, touchdown will occur on September 6 on a high plain between two craters, Manzinus C and Simpelius N, about 70 degrees south of the equator.

“The Moon’s polar regions are intriguing to scientists and exploration advocates because water ice is abundant there, on the floors of permanently shadowed craters. Such ‘lunar cold traps’ contain a fossil record of the early solar system and also harbour a precious resource that could aid human exploration of Earth’s nearest neighbour.”

Science news portal, phys.org says “India will step up the international space race on Monday when it launches a low-cost mission to become only the fourth country to land a probe on the Moon. Almost the entire Chandrayaan-2’s orbiter, lander and rover have been designed and made in India.”

Scientific American website says: “The new mission’s journey could yield vital information about the Moon’s mysterious troves of water, which could be used for scientific studies of deep lunar history – or for manufacturing rocket fuel, potable water and breathable air in support of future human outposts.”

Website Planetary News says that “One of the most compelling results from Chandrayaan-1 was the detection of water (OH) on the Moon by both the Moon Mineralogy Mapper (M3), a NASA provided instrument, and ISRO’s Moon Impact Probe (MIP). Contact with the spacecraft was lost in August 2009, putting an end to the science mission, but NASA has since relocated the spacecraft in lunar orbit using ground-based radars. Though it operated at the Moon for less than half of its expected two year lifetime, the mission accomplished approximately 95 per cent of its mission objectives.”