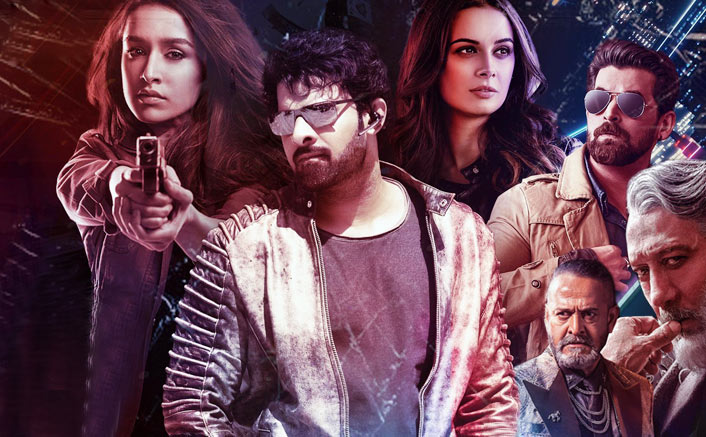 I don’t know if I heard correctly – too much noise both on screen and in theatre – but Prabhas tells his ladylove , “You are too pretty to be a cop”.

From quite early, political correctness and gender equality are not looming concerns in this punishingly prolonged paean to machismo .

The action is good, sometimes outstanding, but where’s the story? Where is the script? “Saaho” suffers from an undernourished plot. In physical terms. It is all beef and brawn, but no substance, no balance and certainly no restraint. Prabhas acts and acts, and then he acts some more, just for good measure. There are no reflective pauses in his performance. He, and the film, are afraid to let go of even a minute of the 3-hour playing time to celebrate the joys of rumination and contemplation. Can’t risk the loo exodus.

“Saaho” is all action, no reaction. The hijinks are relentless and after a point, unendurable. It’s like being at a rave party where the noise assails you. You wish the music would stop long enough to let you breathe in peace. For just a while, please? You wish the actors (who act and act and act) would speak normally instead of bombarding us with what sounds like wisdom culled from the back of cereal cartons.

The villains, there are so many of them, I lost count. But I must credit the film for representing evil from every generation of its perpetrators. From a wizened and still wacky Tinu Anand, to Chunky Pandey who grimaces like he just saw his star-daughter’s latest interview, to Neil Nitin Mukesh who thinks flared nostrils are an indication of vileness, and then Mandira Bedi, so slinky and seductive in a film that favours flab.

They all ham, oh yes! That’s the need of the hour. Three hours. That’s the brief for the swag party. Prabhas tries to do everything from comedy to dancing to… errrr… acting. But – how do I put this politely – if you want to see a better Prabhas, buy yourself entry into a screening of “Baahubali”. Here in “Saaho” (won’t reveal why the film has that strange Bhojpuri-sounding title) when Prabhas summons menace, the Dennis within him shows up.

For an out-and-out vehicle for heavy duty ‘heroticism’, Shradha Kapoor seems to have a lot to do. She fusses about her business of being an important agent of change, like assistants on film sets who basically make no difference to the proceedings. Damn, Ms Kapoor even kicks some ass, though I am not sure the ass is really worth kicking. It’s like kicking the pricks.Futile and damaging.

Ah yes, the clock is ticking. So, on to the mainstay and hub of the film. The action scenes. Are they as riveting as promised? Well, yes and no. The stunts and the endless chase sequences have a high level of adrenaline flowing in their veins. And they show a level of competence hardly seen in Indian cinema. But Prabhas doesn’t move fast enough. It’s like he has the burden of living up to the “Baahubali” frenzy weighing on his shoulders.

I wish he would just relax. Breathe easy. Let the mojo float. But no. There is the next fight and chase. And the one after that. It’s like a schoolboy who wants to show all his tricks to his parent’s guests. After a point you just want it to stop. “Saaho” leaves you exhausted. And craving for some peace and quiet.

“Saaho” is like a mammoth ship waiting to anchor. It is neither massy enough for the Telugu audience, inured as it is in its own grandiose delusional plans of slickness, nor clever or classy enough to please Hindi moviegoers.

A film can be made on my life: Ranu Mondal tells her story