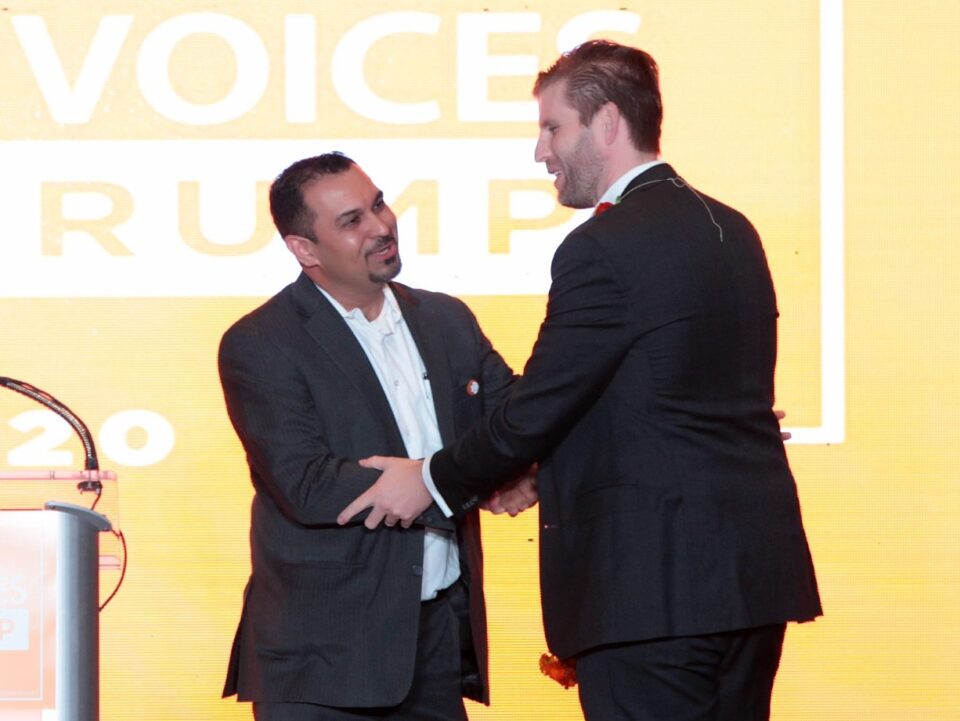 Atlanta, GA, October 1, 2020: “We as a family, we truly love you. We truly love you. We love what you represent. You represent the best of America. You represent the best of this society. And I can tell you, my father will never, never, ever let you down,” said Eric Trump, addressing a crowd of over 300 attendees at the formal launch event of Indian Voices for Trump event (IVT). The event was hosted by IVT board member Ritesh Desai, at the Infinite Energy center in Atlanta on September 15, 2020. Atlanta based Desai is one of the 19 board members of the nationwide IVT campaign.

Dr. Rich McCormick, currently contesting for election to the U.S. House to represent Georgia’s 7th Congressional District, was a speaker at the event.

An unprecedented pandemic and all-pervading uncertainty notwithstanding, the race to the White House ahead of the presidential election has picked up swift pace. With poll numbers running close, various demographics, including 1.8 million Indian-American voters, particularly in pivotal states of Florida, Pennsylvania, Michigan, Georgia, North Carolina, Virginia and Texas form an integral part of the 2020 elections.

“The President appreciates the values that we hold dear – our focus on family values, education, faith and entrepreneurship. He has appointed at the highest levels, a number of Indian-Americans because of their merit,” said Desai in his address, citing Seema Verma, CMS administrator and Raj Shah, deputy press secretary in the Trump administration. Desai also thanked President Trump for recognizing Indian-American contributions to the country and strengthening India-US ties.

“President Trump is a very close friend of India and the Indian-American community. He has and will continue to build closer ties between the two countries. India being the largest democracy in the world and US being the oldest, they are natural allies,” noted Desai.

“The Indian immigrants that we have here are the ideal citizens,” said Dr. McCormick in his address, also commending the community for raising “children to value education, to value opportunity, and to value the common sense core of conservatism.” Dr. McCormick noted that there was a fundamental difference between the left and the right, right now. “It comes down to what you believe in. Do you believe in your community or do you believe in a bigger government to solve our problems?” he asked. “When we start the conversation, we always start with love, that we love all of you. We want the best future for all minorities and immigrants. This is not a racist party; it is just the opposite. We are looking for economic opportunity, security and the freedoms that gave Americans always the dream that we’ve always pursued, for the history of mankind.”

The hall reverberated to the auspicious Mangal Vadya (enabling tool) of Shehnai, and rhythmic beats of band baja as Desai welcomed Eric Trump to the podium, followed by a Hindu prayer and the Pledge of Allegiance rendered by Desai’s three daughters.

“The Trumps, we really know our marble and that was incredible. What a beautiful place, what a beautiful tour and what a beautiful community you have. Truly honored to be wearing this,” opened Eric Trump, referring to the vibrant flower garland that gleamed on his white shirt, and in awe of the marble craftsmanship at BAPS Mandir he had toured prior to the event.

“India is a spectacular country with incredible people,” said Eric Trump, who has been campaigning on behalf of his father across the country, describing Indian-Americans as an ‘amazing, amazing’ community. The Indian American community and Trump family, Eric Trump observed, were similar in terms of ‘family, work, faith, love of America, love of country’. He also cited buildings that his family business operated in India.

Referring to his father’s policy on China and Pakistan, Eric Trump said his dad is ‘very different’ from his predecessors. “I think that’s very different than past presidents, to tell you the truth. I think, when you see how past presidents have emboldened China. And you see the problems that Indians are having with China and will likely have with China and in fact the whole world will probably have with China at some point. You know, the problems with Pakistan better than I ever will.”

“Eric Trump’s humility was my biggest takeaway from the event,” said Desai talking to NRI Pulse, post the event. “A few things he said to me and at the event resonated with me, like when he said his family loves India, it felt honest and genuine.”

Desai said the intent of the event was for Eric Trump to meet, interact and encourage the community to vote. “To let us know we mattered.”

Having worked in various capacities with members of the Trump campaign, Desai said they knew him enough to trust him with the event. And when Eric Trump’s tour began with a stop in Atlanta, the campaign reached out to him and the rest, as they say, is history. He added that most of security detail was taken care of by the secret service.

No stranger to politics, Desai has been part of Atlanta’s political landscape since the 90s. “I wanted my family and my community to have representation and a seat at the table. That’s why I got involved,” said Desai. Desai credits his wife Sheetal (attorney), for her unwavering support and for helping him maintain a strong work life balance. He is thankful his parents and his in-laws who help him unconditionally, his Guru HH Mahant Swami Maharaj, who guides him spiritually and community members who have and continue to encourage and support him.

Desai is the founder of Vanitywala.com and serves as executive vice president. He is leader of the economic development subcommittee within the Asian-American Commission for a New Georgia. Desai is vice chair of Georgia’s Equal Opportunity Commission. Desai was appointed to Transition Committee of the Governor-elect of Georgia and the Georgians First Commission tasked with making Georgia #1 for small business in the country. U.S. Representative John Lewis gave Desai a Special Congressional Recognition. Desai served as president and chairman of the Georgia Indo-American Chamber of Commerce and a board member of the South Asian Journalists Association’s Atlanta chapter. He currently serves as director of public relations for BAPS-Atlanta and southeast representative to the National Government Relations Committee of BAPS North America.

Why does Desai believe in re-electing President Trump for a second term? “What the Trump Administration has done in 47 months with the constant attack from the other side is truly commendable and it’s probably more than what the other side could even think about doing in 47 years of service Biden has been in elected office. In 47 months, President Trump has signed peace deals in the Middle East, he has redone NAFTA, in fact has gotten rid of NAFTA and got in USMCA which is a fairer deal,” said Desai. Drawing parallels between President Trump and PM Modi, Desai said President Trump puts America first and PM Modi puts India first. “He won despite all odds and delivered results in a big way. We are proud of the work and accomplishments of this President” stated Desai.

As Biden, 77, scripted history with his pick of Senator Kamala Harris, 55, as his running mate, a survey by Indiaspora and Asian Americans & Pacific Islanders (AAPI) Data showed that Trump has made inroads into the Indian-American vote bank despite the fact that Biden has a strong relationship with the community and played a key role in bilateral ties over the past few decades. Conventionally, Indian Americans have voted for Democrats in the past. President Trump garnered 16 percent of the Indian American vote in 2016. With his increasing popularity in the diaspora, now 28% of Indian Americans support Trump with 68% still with Biden, per Asian American Voter survey released Tuesday, September 15.

As Desai observed, in an election where every vote matters, Indian-American votes have turned out to be an impactful base.

The race is on.