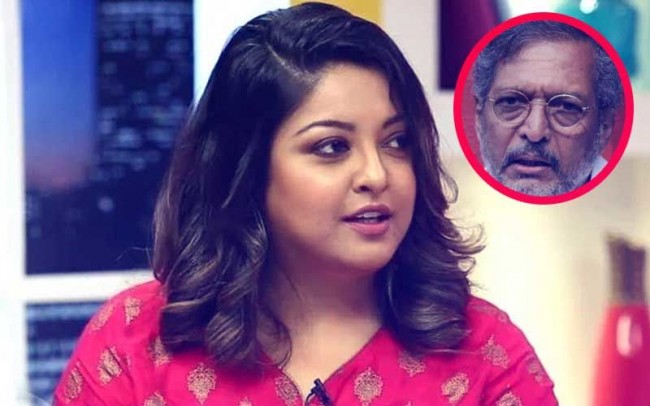 In his first response since the allegation re-emerged this week a decade after Tanushree had spoken out about it, Nana told Mirror Now: “What can I do about what one says? You tell me. What does it mean by sexual harassment?”

Tanushree, who had first raised the allegation against Nana in 2008, brought the spotlight once again on her unsavoury experience of working with the actor in the film “Horn ‘Ok’ Pleassss”, through a recent interview.

Nana told Mirror Now: “We were on the set and there were 200 people sitting in front of us. What I can say?”

Asked if he will take any legal action, he said: “I will see what can be done legally. (When asked about any legal action) Let’s see. It is also wrong/inappropriate to talk to you (media) since you publish anything.”

On the allegation that there’s a different face to the National Award-winning actor, Nana said: “Let anyone say anything. I will continue to do in my life what I have been doing.”

Tanushree’s allegation is being seen as one that is likely to kickstart Bollywood’s own #MeToo movement.

She has hit out at Nana and named choreographer Ganesh Acharya, director Rakesh Sarang and producer Sami Siddiqui as accomplices in the harassment she faced.

Back in 2008, at a press conference to address the “indecent behaviour” allegation by Tanushree, Nana had said he was highly surprised at the charges by the actress, who he said was “my daughter’s age”.

On her part, the former beauty queen has said her voice was suppressed back then by Nana’s powerful position.

Strong reactions from Bollywood are yet to emerge on the controversy.

In fact, Bollywood icon Amitabh Bachchan on Thursday dodged a question about the news, steering clear from the row.

At a film’s trailer launch, a mediaperson asked the thespian and superstar Aamir Khan to share their views.

Big B said: “Naa toh mera naam Tanushree hai, naa hee Nana Patekar. Kaise uttar dun aapko iss sawaal ka? (Neither is my name Tanushree, nor is it Nana Patekar. How do I answer this question?)”

On the other hand, Aamir said: “Without knowing the veracity of something or the details of something, I don’t think I can comment. It is not right for me. But I would like to say that whenever something like this does happen, it’s really sad. Now if it has happened or not it is for people to investigate.”

Actress Shruti Seth hopes Tanushree’s moment of stepping out and naming and shaming “is the beginning of the end of sexual harassment in Bollywood”.

“I hope more women find courage to call out their perpetrators. Bravo,” she added.

Tanushree hopes her story gives “girls a sense of confidence to come out with their story if they are suffering”.

“Back then, the mainstream media did not pursue the story as actively as it is happening in the present day. Now, it is the right time for all the victims to share their story,” Tanushree said.

While a string of Bollywood celebrities, including filmmakers and actors have called out casting couch and sexual harassment in the industry, naming and shaming is yet to become a reality, even as Hollywood counterparts have remained outspoken ever since mass allegations against producer Harvey Weinstein came to light.

Comedian Bill Cosby has been sentenced upto 10 years in prison and has been branded a “sexually violent predator” by a US court for drugging and sexually assaulting a woman in 2004.