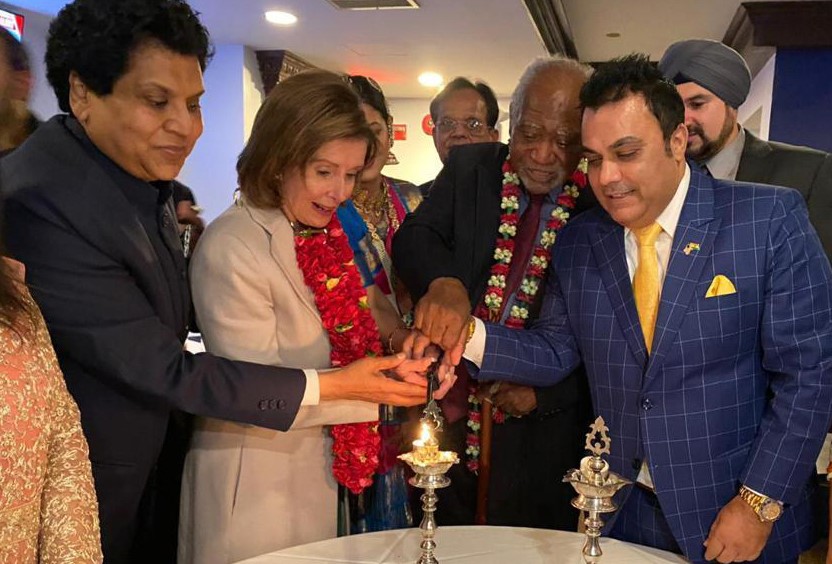 Dr Vijay G Prabhakar, Indian American Community Leader from Chicago said that this Diwali celebration with the participation of Speaker Nancy Pelosi, the third-highest elected official of USA was significant because for the first time since 2009 Diwali was not being celebrated in the White House. President Obama was the first U. S. President to celebrate Diwali in the White House in 2009, and thereafter all Presidents annually celebrated Diwali.

Dr. Vijay G Prabhakar said that the White House not celebrating Diwali this year 2021 had triggered them to organize official celebrations for the first time with the U. S. House Speaker, the State of Illinois House Speaker, the City of Chicago Council and Cook County Treasurer’s office to showcase India’s heritage during this festival season.

Kishor Mehta, Emeritus Chair, Congressman Danny Davis’s Multi-Ethnic Advisory Task Force thanked U. S. Congressman Danny Davis, who was the only Congressman from Midwest who welcomed India’s Prime Minister Modi to the United States in New York  2014 and in Houston in 2019,  for hosting the Diwali Celebration. Mehta added that Congressman Davis has been an ardent supporter of strong US- India ties especially recalling his pioneering efforts during the Covid pandemic.

Dr Sreenivas Reddy, Member, National Council on White House History said that Indian American leaders have participated in this celebration to usher in a spirit of prosperity and peace with the Biden Harris administration and strengthen U.S. -Indo ties.

Lion Hina Trivedi, Founder, Chicago Indo U. S. Lions Club thanked the over hundred guests who attended the celebrations and singled out Tumia Romero, Chief of Staff of Congressman Danny Davis for hosting this historic celebration at the National Democratic Club at Washington D. C.