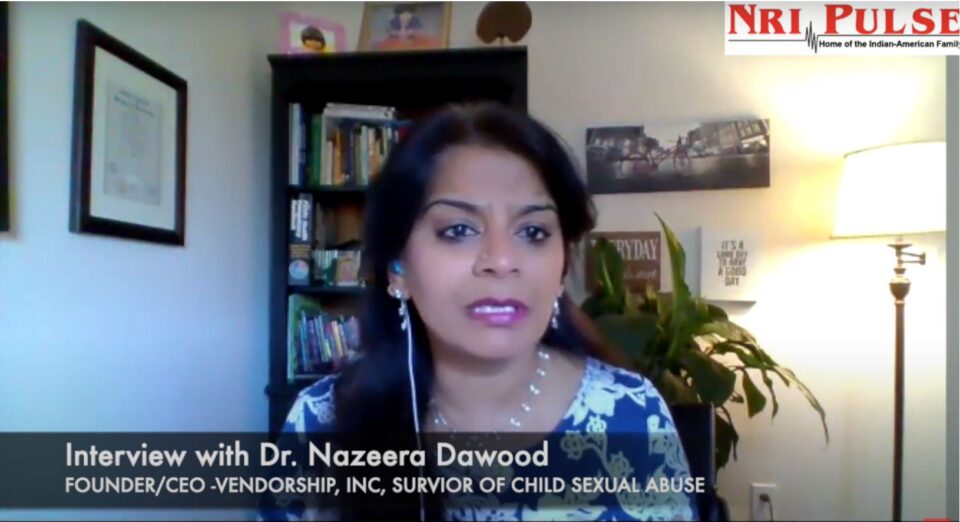 “Listen, we are going to play a game.” was just about enough to entice a six-year-old to explore the “game”, which she was told was a secret they shared and never to be disclosed. That it came from someone her family trusted had put her at ease. It didn’t take the child very long to discover that this was not as “fun” as she anticipated. On the contrary, it was dreadful and simply painful. And unfortunately for her, it would continue for years to come, when her parents and sisters were not around a hearing distance. The perpetrator had picked his prey with diligence, zeroing in on the more quiet, submissive oldest of sisters, who he knew was the least likely to talk. And he was right.

This is the story of child sexual abuse survivor and advocate for the cause, Dr. Nazeera Dawood, who, today is an entrepreneur and current Founder/CEO at Vendorship, Inc and founder/President at Nazeera, LLC. Her monthly Chai and Chat series facilitates open dialogues about some controversial and unspoken issues with an expert panel, free of cost to attendees.

But then, not all stories have a happy ending. The fear, confusion and shame Dawood experienced as a child is unfortunately ubiquitous across the globe, surpassing race, creed, caste, gender, class, religion or ethnicity.

Every 73 seconds, an American is sexually assaulted. And every 9 minutes, that victim is a child (rainn.org).

“It was sometime after I turned forty that these memories started coming back to me,” said Dawood. Why after 40? Dawood reasons that a woman gets occupied with responsibility towards parents, education, job, kids and more. But once all that simmers down, the mind opens up.

As unresolved memories emerged, Dawood said she felt “the fear and shame that had gripped her as a child, of not being able to tell anyone,” an emotional upheaval she and most survivors experience. Dawood says she lived with a realization for a couple of years trying to figure out ways to handle her trauma. It was during this period, Dawood says, she was also able to comprehend some of her life and lifestyle choices, such as not being comfortable with friends or parties, resulting from low self-esteem and isolation, engrained since a tender age.

“Lack of trust,” noted Dawood, is something every survivor suffers through. Like her, most survivors are not able to build long term relationships, because they serve as trigger points, leaving them wondering how that trusted person might hurt them. “So we are putting that negative thought even beforehand.”

The memories that surfaced, even after many years, Dawood says were quite vivid. She recalled the first time she was invited for a “game” and being asked to touch him and touched inappropriately and the immense physical pain she endured, physically and emotionally. That was only the beginning and continued until she was thirteen. “During daytime or evening this is happening to me. And the next day I’m going to school. He’s touching my private parts, and he’s telling me not to tell anyone,” the fear and confusion of a child going through sexual abuse is often similar, deliberates Dawood.

“The worst part is, sometimes mom and dad are in the other room,” said Dawood, adding that it compounds sadness with anger towards parents, who were supposed to protect her. “You’re supposed to protect me.” While Dawood admits her anger, she also acknowledges that parents always land up feeling the worst because they “carry the blame to their grave.”

While Dawood was fortunate to steer her life the right way, she said research shows that the abominable array of emotions that lay buried inside often leads to poor lifestyle choices. “This is childhood trauma, it’s like PTSD, and they are not healing,” she observed, adding that the low self-esteem often leads them to prostitution, and depression. “Some will not allow love to enter into their life, because they don’t trust anyone, even their own children.” Dawood says survivors believe there’s an agenda behind any appreciation that comes their way.

A bright student who excelled at academics and extracurricular activities, Dawood says she found solace at times when there were no visits from the predator. But after each incident, she cried herself to sleep or sometimes at school bearing the brunt of shame, suffering in silence.  The display of isolation/hesitation from certain people or places, withdrawal from friends or usual activities, changes in behavior, depression and anxiety, Dawood notes are some of the warning signs of child abuse. Dawood believes that her trauma, as in the case of other victims, was then and is now preventable.

“Increasing awareness and promoting safe childhood environment is number one priority,” said Dawood. The perpetrator, who the family put their trust in, Dawood describes is “the hidden part of this beast.” Research says 90% of victims know their abuser. As in her own case, Dawood says, while it is difficult to identify offenders, especially since they appear solemnly normal, there are a few signs such as someone being overtly interested in spending more time with your child alone, bringing them gifts for no reason. While these maybe be genuine gestures in some cases, it is always important to be alert, she cautioned.

“The first thing I did after I uncovered what had happened to me was to put my kids into a program,” said Dawood, citing Revved up kids as the program she chose for her kids.

“Don’t force kids to get hugs or kisses from anyone just because there might be your own uncle (relative) or someone you know. Allow them to have that space to say no,” stated Dawood about preventive actions. One of the key elements she notes is to talk to kids about privacy, good and bad touch, and to name body parts as such and not have nick names. Educating kids about things such as who can and cannot touch them, not sitting on people’s lap, need to start early, she urged.

While abused kids hurt everywhere, cultures, such as South-Asian, Dawood observes, are more restrictive, be it raising sexual awareness in kids or confronting the abuser. Dawood has not confronted her abuser yet, owing to pressure about “not spoiling his family after all these years.” But she plans to, when the opportunity presents itself. The other issue with our culture, patriarchal by nature, often does not question men and that needs to change, she asserts.

“Acknowledging in public really helps a lot because then you don’t have anything hidden inside you,” said Dawood who came out with a video to share her story with the world. “The minute I came out of it and started talking, I became a free bird.”

To survive the trauma of abuse, children learn coping strategies like denial, self-blame, and normalizing sexual exploitation. How did Dawood cope with her fears and triumph over her trauma? “Coping comes with different levels of healing, doesn’t happen overnight. We have to find love within ourselves,” said Dawood, adding that spirituality aided the process. While coping process varies for everyone, Dawood says finding that space or person with whom they can be themselves with no pretensions and taking regular breaks to rejuvenate or pursue what brings them joy, also helps. Admitting she has good and bad days, living with a purpose facilitates healing, she adds. While survivors find it difficult to find true love, Dawood says if they do, it is crucial for the partner to take up counseling because the survivor is prone to mood swings, is not trusting, and tends to have different personality disorders and partners need to be prepared. She cautioned survivors to be mindful of predators who know their stories and might use their vulnerabilities against them. Dawood also pointed to internet predators who can easily prey upon a survivor or victim’s sensitivities, with false identities. “Learn to say no, when you feel like saying no.”

Dawood urged parents to educate kids early on and if they are not comfortable, to avail several educational preventive programs that are available. Highlighting rape culture, Dawood underlined the importance of consent, to both boys and girls – for girls to say no and for boys to step back and recognize no as an acceptable answer. Dawood also urged for communities to step up social activism against sexual abuse and become a part of this conversation, in talking to men about respecting and not devaluing women from early on.

“There can be no keener revelation of a society’s soul than the way it treats it’s children,” Nelson Mandela rightly quoted. Let us do right by them.