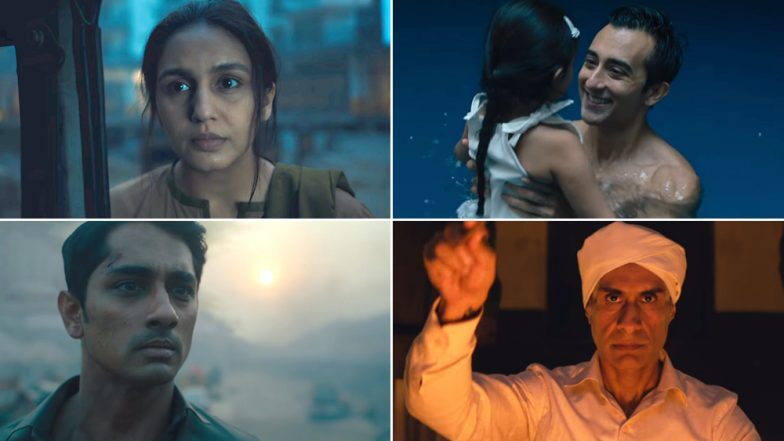 In the beginning there is the swimming pool. A splashy symbol of the upper crust’s affluence that is rapidly making the poor, poorer.

Deepa Mehta’s disturbingly devastating dystopian drama begins with a happy family: mother, father, child splashing in the pool. Within the first five minutes, the mood swerves away from joy and Shalini, the protagonist whose journey we follow from episode to enrapturing episodes of acute pain and limited joy, finds herself alone in a clinical ashram that resembles the shelter home in Muzaffarpur where young girls simply disappeared when they didn’t obey the elders’ salacious orders.

Except, that there is no sex in this world of sterile religiosity and puerile purification. Emulating the Nazi model of a concentration camp, Mehta’s futuristic world of emotionless totalitarianism is grim, joyless and utterly terrifying. Those women in dull crimson saris moving around zombie-like in a place of perverse purification run by a slimy religious freak (Arif Zakaria, breathing toxicity) reminded me of Margaret Atwood’s “The Handmaid’s Tale”.

The difference being, the world that Mehta’s emotionally vandalised characters inhabit, is far more imminent and immediate and catastrophic. Wisely, Mehta’s writers Urmi Juvekar, Suhani Kanwar and Patrick Graham have avoided any true-life political or religious references. But the colour saffron, though used sparingly, is ‘Om’nipresent, and nowhere more so than in the first episode. The cinematography is so austere and colourless that it feels like a painting that has bled itself to a blur.

One of the many assets of this gem of a picaresque series is that it makes radical shifts of location in every episode, putting the protagonist Shalini in places where her feminine wiles and maternal instincts come into play with sinister consequences.

Huma Qureshi captures every heartbeat of the mother’s search for her missing daughter. Her face caught in tight close-ups displays enormous fortitude and hope in the midst of abject despair. This is Huma’s moment of resurrection.

In the second episode, she befriends a female street urchin with whom she wades through heaps of garbage to escape a seemingly dangerous government agent Bhanu (Siddharth) who, predictably, seems to harbour a soft corner for the woman he’s supposed to capture and probably kill. This is my least favourite episode with the little girl from the chawl overdoing the cutesie act and almost parodying the sympathy card.

Siddharth, habitually reliable (and quite effective in Mehta’s “Midnight’s Children”) here fails to register his character’s tonal ambivalence. But the other Mehta favourite Seema Biswas is excellent as a wheeler dealer with a sympathetic heart who helps the heroine whenever it suits her. I wish there was more of Biswas in the series. But then this is a world where everything is rationed.

This is a series that keeps us watching till the devastating finale. I won’t say it’s done without emotional manipulation. There are points in the plot where the narrative cleverly modulates its tone to hold our attention. But we don’t mind. “Leila” is an epic saga which conveys a lot more than the fear of the corroding spirit of radicalism that has seeped into a social fabric. It’s the story of racial segregation and cultural nihilism told in a deceptively calm tone with a brutal force and feral persuasiveness.

It is amazing how well Huma holds the plot together, going from grieving mother to cunning survivor in the midst of religious, cultural and political chaos that we all would recognise hoping that the world Mehta has created for the future would somehow cancel itself out.

“Leila” makes us think grimly about the future. Bleak and scary as it may be, there is still hope in that smile that lights up Huma’s Shalini’s eyes every time she thinks of her husband (Rahul Khanna) and child.

There is a moment when just before being captured, she slaps a man who has betrayed her trust. The sound of that slap reverberates across Mehta’s world, smothered in terror and treachery. “Leila” is a savage ode to a lost world. It must be seen by every Indian as a timely warning. That glass of water that you are sipping right now could be your last.