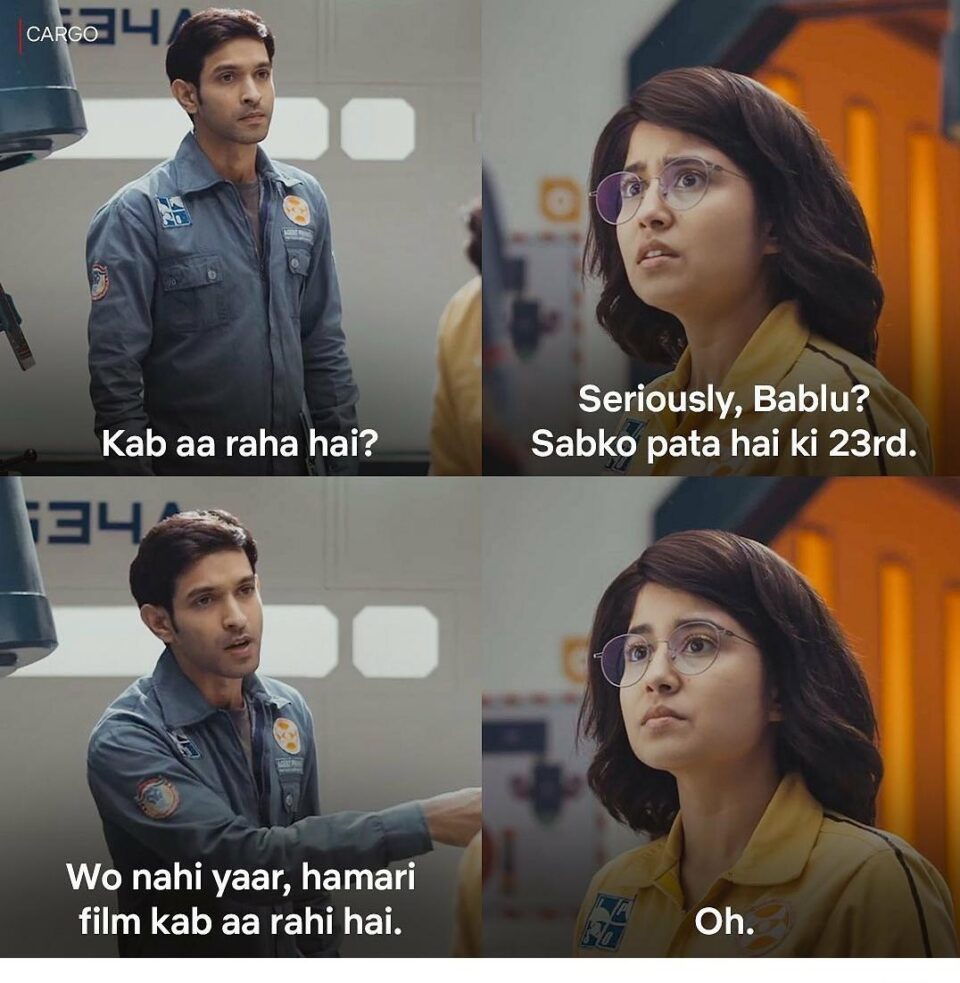 A giant spaceship, Pushpak 634-A, lumbers along in infinite space. In the ship a demon, or rakshas, named Prahastha receives deceased humans, heals them and recycles them for their next birth.

Prahastha, played by Vikrant Massey, is a loner and an introvert. He exchanges few words even with his supervisors on earth via the TV screen that is his only source of communication. He also shuns the idea of social media exchange with his legions of fans. Yes, he has many fans, we are told — doing what he does for 75 years now makes him an important cog in the wheel that drives peace between humans and demons.

Prahastha’s lonely yet measured life is thrown in a tizzy when earth sends the spirited young Yuvishka (Shweta Tripathi) as his assistant. Her arrival on the ship not only disturbs his personal space. He realizes it could have an impact on his professional life, too.

Director Arati Kadav’s debut feature film is an original work that reveals the influences of many accomplished works in the sci-fi genre. Random recall brings back flashes of Sam Rockwell’s lonely astronaut Sam Bell, sole employee at a lunar station, in the Duncan Jones directorial Moon.

Space, loneliness, death and uncertainty about the unknown are common themes in science fiction, patented into a formula in international cinema over the decades. From the time Stanley Kubrick made the seminal 2001: A Space Odyssey in 1968, those themes have been used to create varied hues of mainstream sci-fi, laudably Event Horizon, Sunshine, Prometheus, Gravity, and The Martian to name a few.

Kadav uses the patented potion well, adding the element of Indian mythology with her human-demon subtext. Her treatment of the demon is rooted in the belief that the particular life form is not necessarily a grotesque or menacing being — Prahastha for one looks like any other ordinary human being. The budding filmmaker however avoids probing deep into the metaphysics of life and afterlife despite dealing with a storyline that might have allowed room to explore intrigue.

That is definitely a flaw about Kadav’s storytelling. Despite having an interesting idea in mind, the writer-filmmaker seems unsure of what to do with it. The narrative refuses to take flight and, much like the gigantic Pushpak of her story, lazily moves ahead into nothingness. Editing (Paramita Ghosh) is clearly not one of the film’s high points.

Within the ship, the set design is interesting. The look and feel hark back to spacecraft you would see in old Hollywood sci-fi films, with chunky metal consoles, levers and handles in place touch screen, and obsolete monitors serving as tele-communication devices. The spacecraft itself looks like something out of one of the early Star Wars films of the seventies. It is meant to give you an idea that Prahastha has been at the same job for decades. It outlines a sort of irony — despite his important job profile that affects futures of the lives he deals with, time stands still at Prahastha’s workspace, much like the man himself.

Vikrant Massey’s Prahastha is a restrained protagonist. The performance is nuanced, as Massey gets going with projecting the quiet change that comes about in Prahastha’s mindset with the arrival of Yuvishka. There is something about Massey’s face that balances vulnerability with resolve very well. The actor uses his emotive edge effectively.

For Shweta Tripathi, spontaneity is the key to bring alive her role of the lively Yuvishka. Yet she also gets her moments to effectively portray the character’s angst.

In a film with few primary characters, Kadav uses the exchanges between Prahastha and Yuvishka well, to address existential questions that the screenplay raises. Cargo talks about the need to accept change, and highlights the necessity to recognize the inevitable through its characters. The film tries being sensitive as it goes about it but lacks ample depth while addressing those issues. Also, a little more pace in storytelling would have helped.