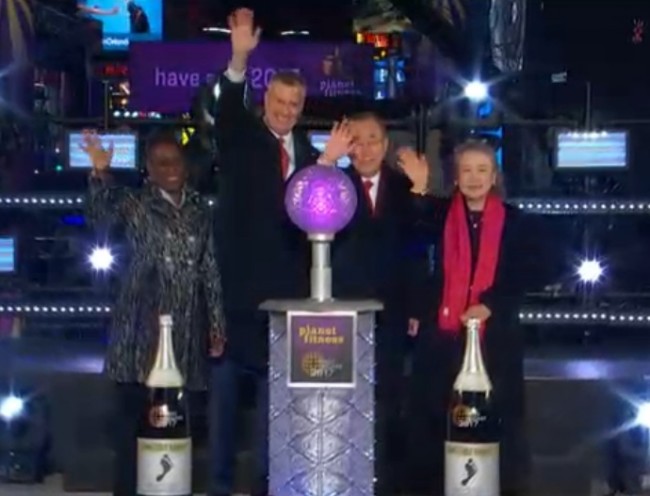 Ban Ki-moon, who ended his term as the Secretary-General of the United Nations, prepares on Saturday for the Times Square ball drop, the gala ritual that marks the start of the New Year. Seen from left are, Chirlane de Blasio, New York Mayor Bill de Blasio, and Ban and his wife, Soon-Taek. (Photo courtesy: Times Square Alliance/via IANS)

New York, Jan 1 (IANS) 2017 dawned on the US with promise of momentous changes as UN Secretary General Ban Ki-moon launched the ceremonial drop of the iconic ball at Times Square, the “Crossroads of the World,” cheered by a crowd of revelers estimated at two million.

The annual ritual marking the start of the New Year took place amid high security, with roads blocked off by sand-filled trucks to ward off potential attackers, and visitors, who began gathering since morning, put through security checks.

Away from New York, President-elect Donald Trump, his wife Melania and 10-year-old son Barron celebrated at a New Year ball in his Mara-a-Lago estate. Actor Sylvester Stallone was among the 800 guests.

Barack Obama was in his native state Honolulu with his family for a quiet celebration of the last New Year’s Day of his presidency. But 2017 will arrive five hours later on the far-flung island several time zones away in the Pacific.

Both Presidents had spent the day Saturday playing golf at places nearly 5,000 miles away.

As the clock raced to midnight in New York, Ban in his last act as Secretary-General hit the switch that sent the 5.3-tonne, 3.6-metre diameter ball made of crystal panels down a 43-metre flagpole to reach its base atop 1 Time Square at the moment the New Year dawned.

Mayor Bill de Blasio stood by Ban as the crowd drawn from around the world as immigrants and tourists roared their welcome to 2017 and some broke into “Auld lang syne” — “Should auld acquaintance be forgot” — the age-old tribute to the friendships that withstand the passage of time.

Ban had earlier said that it would be his Cinderella moment. “Tomorrow at midnight, everything changes,” he said.

At that moment, Antonio Guterres took over as the Secretary-General and Trump was 20 days away from becoming President after an election campaign that deeply split the nation.

The divisiveness held on as 2016 faded and Trump’s tweeted New Year message underscored it: “Happy New Year to all, including to my many enemies and those who have fought me and lost so badly they just don’t know what to do. Love!

In his broadcast earlier on Saturday, Obama recalled his achievements ranging from the creation of 17 million jobs to the killing of Al Qaeda terror chief Osama bin Laden.

Echoing his party’s pessimistic expectation of Trump, he made this promise: “I will be there with you every step of the way to ensure that this country forever strives to live up to the incredible promise of our founding – that all of us are created equal, and all of us deserve every chance to live out our dreams.”

The nation and world waited with varying degrees of expectations Trump’s “Make America Great Again” agenda that promises vast changes to US policies on a scale not seen in recent times.

Domestically he has said that he would repeal Obama’s signature health insurance programme and act on illegal immigration while holding out hopes of massive infrastructure work and job creation.

He has also said he would launch his version of make in America to bring back jobs, limit outsourcing and enforce strict rules on technology worker coming in on temporary visas. All those could impact India.

On matters affecting the rest of the world, Trump has said would free the US of foreign military entanglements while hardening the fight against Islamic terrorism.

More importantly, he has signaled closer ties with Russia – a prospect that Obama has tried in his last days to undermine by imposing severe sanctions on Moscow over what he says are its interference in US elections.

Trade agreements would be up for reconsideration, Trump has said, taking aim in particular at China.

Four others, Ami Bera, Pramila Jayapal, Raja Krishnamoorthi and Ro Khanna, will be in the House of Representatives.

The security for Times Square celebrations was extremely stringent given the terrorist attacks with vehicles in Marseilles and Berlin and the shootings on Saturday in Istanbul.