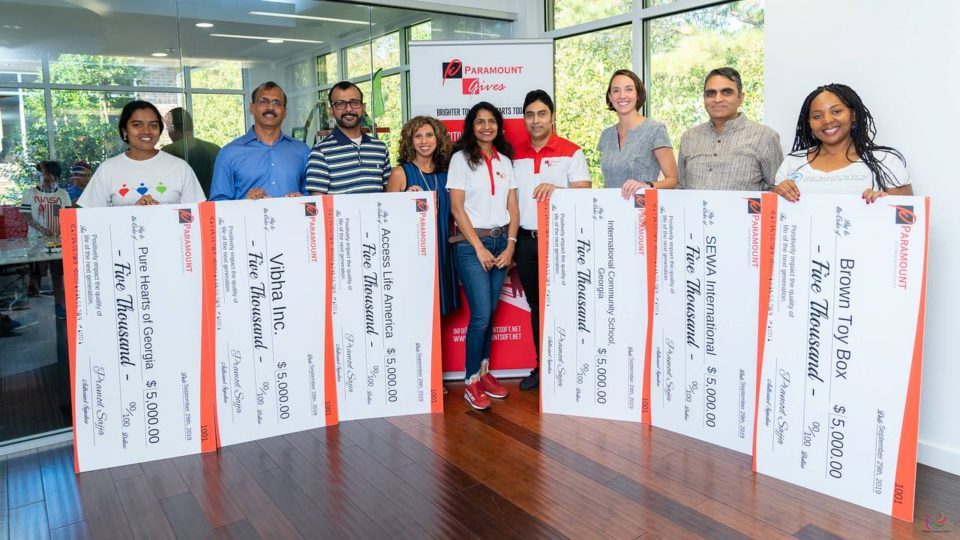 Atlanta, GA, October 10, 2019: Christmas came early for six charities working with children, as Paramount Software Solutions donated $30,000 at PARAMOUNT GIVES, an inaugural employee giving appreciation event held at their office in Alpharetta on September 29, 2019. Secretary of State, Brad Raffensperger and Fulton County Commissioner, Bob Ellis were the guests of honor. The event organized by Social Measures, LLC, was an effort to bring employees to connect with organizations and witness the impact of their efforts towards supporting not- for- profit organizations.

“Our mission is to positively impact children’s education and health to ensure they are tomorrow’s successful leaders,” said Pramod Sajja, President, Paramount Software Solutions. As part of that mission Paramount employees donated towards local and international non- profits, which was matched 100% by Paramount. At the event, donations raised were handed to six charities, local and international, that work for betterment of children.

In line with the theme, kids took to the stage during the check ceremony to introduce charity organizations Vibha, Sewa international, Access life America, Pure hearts of Georgia, International Community School and Brown Toy Box, that received donations of $5000 each. The event also featured a unique Robotics exhibit by kids of employees of Paramount. Yash Sajja, who was celebrating his birthday, said he was happy to share his special day for the cause.

“One of the best things that we can do, is have strong communities. And it is great to see Paramount and its employees coming together to build one,” said Raffensperger, applauding the efforts of Paramount. He highlighted other concerns facing society and kids in particular, including drugs, alcohol and mental health issues. He talked about counseling first time drug offenders in jail, so they are well prepared when they walk out. Citing his son’s medical condition, Hodgins’s lymphoma, Raffensperger said he related on a personal level to kids suffering from diseases.

“The Indian-American community in particular has a lot of great organizations that try and help kids, especially with physical and mental health challenges and we are all really a part of that fabric,” noted Commissioner Ellis.

Representatives of all charities reiterated one common theme, which happened to be Sajja’s benevolent contributions to the charities with little or no persuasion. Neha Negandhi, who coordinated the event added that Sajja had been doing this for many years until she recommended a formal event for it.

Negandhi founded a corporate social responsibility consulting company that works with small and mid-size companies to define their CSR mission, create community engagement strategies and then do social ROI metrics.

In an exclusive with NRI Pulse, Secretary of State, Brad Raffensperger talked about his office’s choice of Dominion Voting systems as the company that will produce 30,000 voting machines. “The old system, the direct-recording electronic machines cast each vote on a memory card. And the new ballot-marking devices print out a paper ballot with a summary of the voter’s selection plus a QR code that is then scanned and stored. The QR code is used to count results on Election Day and the human-readable text summary is used for audits or recounts and the scanner takes a picture of the ballot that could also be used to verify results,” he elaborated. “This is a large step towards modernizing the state’s 17-year-old system and making elections more secure.”

“With the upcoming elections in 2020, cyber security, firewalls and protection of confidential voter databases,” Raffensperger said was one of his priorities in the next four years. Streamlining regulations, licensing reform he added were some of his other priorities.

The Nawab of Bollywood’s jawabs for Atlanta fans