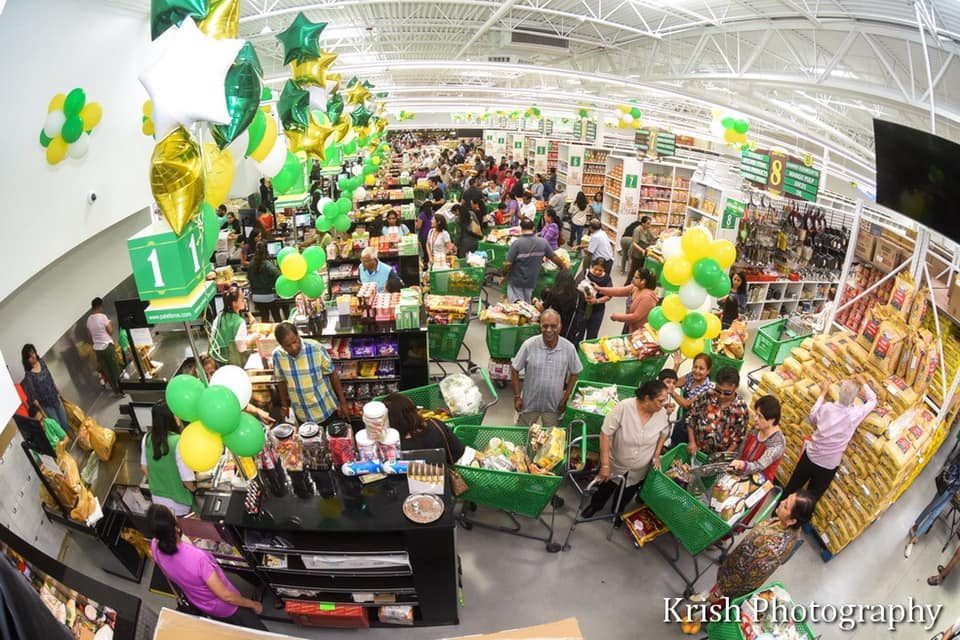 Despite being a weekday morning, customers thronged the sprawling venue, filling up carts and baskets, ready to shop till they dropped.

Consul Shailesh Lakhtakia, representatives from Governor Kemp’s office and State Senator Greg Dolezal presided as the guests of honor. Members of the Patel family including co-founders Mafatbhai and Talashibhai Patel, and Mafatbhai’s sons Rakesh and Swetal Patel were among those who flew in from Chicago to be part of the opening ceremony. They were joined by Atlanta based Kalpesh Patel who manages the Southeast region.

The crowd only seemed to increase exponentially as the day progressed, and even the ample parking lot was full.

An upbeat and vibrant dance performance by students of Shiv’s Institute of Dance kicked off the festivities. A traditional pooja to bless the business and ribbon cutting later, the crowd lined up outside made their way into the abundantly stocked store.

The store boasts of over 4000 neatly shelved items. This location also offers fresh rotis and pav as pointed by co-founder Mafatbhai, in his conversation with NRI Pulse.

“This is the largest store in the entire state. We have more than 4000 items. Whatever you can find in India and even more is what you will find in the store. We have fresh roti maker here and we also make fresh pav,” he said.

“This is our second largest store in the entire country spanning 35,000 sq. ft, part of the Patel Mall here in Suwanee. Once the rest of the stores open up, it will be your one stop shopping mall. You will have everything from jewelry, shopping, a plethora of restaurants to choose from,” said Swetal Patel, son of Mafatbhai Patel.

“We are so honored to have this store here. I thought I was just coming to a grocery store. But its more than a grocery store, it’s a whole center located here in Forsyth county. It’s beautiful,” commented Senator Dolezal.

Consul Lakhtakia was impressed with the prime location, ample parking and the variety of products on the shelves. “Patel Brothers is doing a great job in presenting our food, our culture to the larger community,” he said.

Anand Rajeurs traveled all the way from Roswell to grab a good deal, filling his cart with almost all the items that were advertised in the Patel Brothers mailer.

Apart from being the most successful Indian store in the region, Patel Brothers is known to give back to the community through cultural and social event sponsorships.

From its humble beginnings with a 800 sq. ft store in Chicago to one of their largest stores on a 14-acre property in Suwanee (second to 60,000 sq. ft. store in Naperville, IL), Patel brothers sure has come a long way.

Patel Brothers will soon open in Marietta. Going by the response from the community, Mafatbhai’s dream of seeing a 100 stores in his lifetime might soon come true.