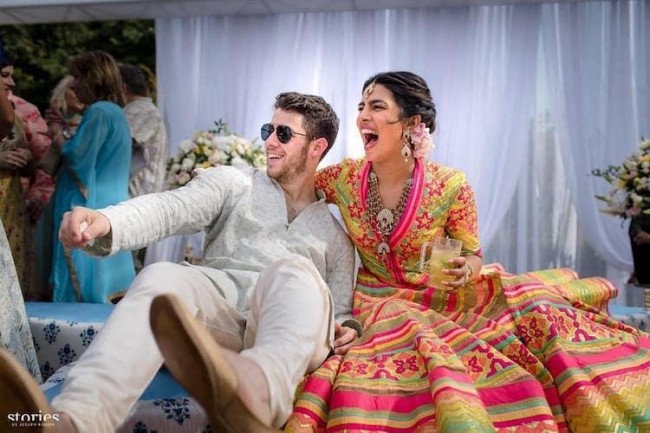 New Delhi, Dec 3 (IANS) After a section of social media users cracked down on the use of firecrackers at the wedding celebrations of Bollywood star Priyanka Chopra and American singer Nick Jonas in Jodhpur, animal rights organisation PETA has raised a concern about the use of a horse and elephant at their nuptials.

“Dear Priyanka Chopra and Nick Jonas. Elephants for weddings live in chains and horses are controlled with whips, spiked bits. People are rejecting elephant rides and having horse-free weddings. Congrats, but we regret it was not a happy day for animals,” PETA India posted on Twitter on Monday, a day after the two celebrities got married in a traditional Hindu ceremony.

Nick is said to have arrived on a horseback for the wedding.

The post by People for Ethical Treatment of Animals (PETA) was backed by a video titled “Band, Baaja, Brutality”, and showcased what horses go through when they are used at weddings.

According to PETA India CEO Manilal Valliyate, “Priyanka has been ill served by not being advised of the firestorm that would be caused by participating in animal abuse”.

“It doesn’t make a person look big or glamorous to promote cruelty to animals who has no choice but to serve. It makes them look small. Overwhelmingly, these days PETA is delighted to see so many celebrities feel passionately about protecting animals,” Valliyate said in a statement to IANS.

Before this, the much talked about ‘#NickYanka’ wedding, drew the ire of social media users who pointed out at the use of fireworks, which lit up the Jodhpur sky on the night of December 1 — the same day the couple exchanged wedding vows in a Christian ceremony officiated by the groom’s father.

Netizens pointed at “double standards” as around Diwali this year, Priyanka, who is asthmatic herself, had urged people to follow the ‘Less pollution, more laddoos’ policy for the festival of fights.

Priyanka and Nick had a three-day wedding extravaganza, complete with a colourful mehendi gala, a friendly cricket match, a sangeet function and two weddings following each of their customs, at Jodhpur’s Umaid Bhawan Palace. The celebrations were attended by close family and friends.

They have scheduled a reception in New Delhi on Tuesday evening.

Sonali Bendre beams with joy as she returns to 'motherland'