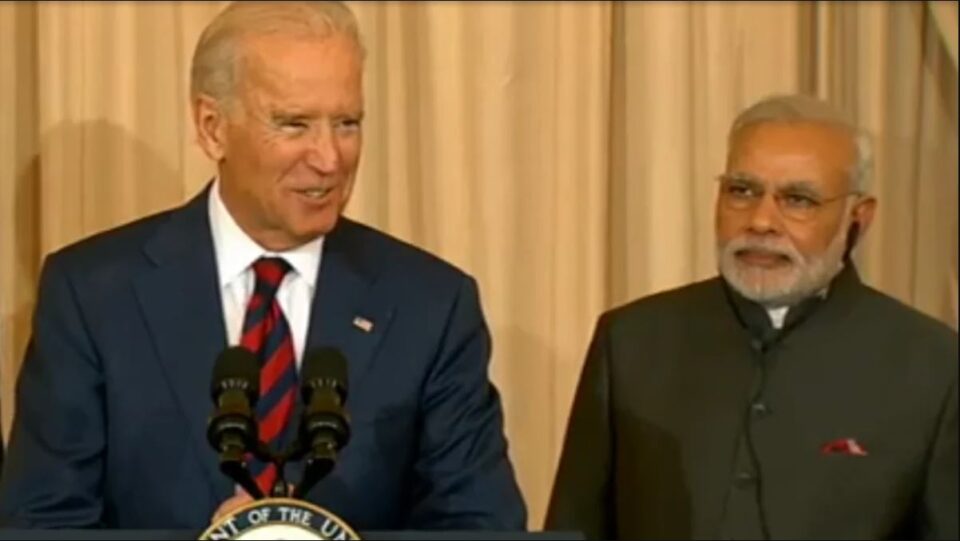 Atlanta, GA, September 21, 2021: Indian Prime Minister Narendra Modi is part of the first-ever in person Summit of the four leaders of the Quadrilateral Framework (Quad) hosted by US President Joe Biden on September 24, 2021 at the White House. The two other leaders in the summit include Prime Minister Scott Morrison of Australia and  Prime Minister Yoshihide Suga of Japan. The Leaders will review progress made since their first virtual Summit on 12 March 2021 and discuss regional issues of shared interest.

PM Modi is also scheduled to address the General Debate of the High-Level Segment of the 76th Session of the United Nations General Assembly (UNGA) on September 25, 2021 in New York. This is PM Modi’s seventh visit to the US and his second foreign visit after Bangladesh amidst the Covid-19 pandemic.

Press Secretary Jen Psaki in her statement on the Quad Leaders’ Summit said that “The Biden-Harris Administration has made elevating the Quad a priority, as seen through the first-ever Quad Leaders-level engagement in March, which was virtual, and now this Summit, which will be in-person. Hosting the leaders of the Quad demonstrates the Biden-Harris Administration’s priority of engaging in the Indo-Pacific, including through new multilateral configurations to meet the challenges of the 21st century.”

As part of their ongoing efforts to contain the COVID-19 pandemic, the summit will review the Quad Vaccine initiative which was announced in March this year. They will also exchange views on contemporary global issues such as critical and emerging technologies, connectivity and infrastructure, cyber security, maritime security, humanitarian assistance / disaster relief, climate change and education. The Summit provides a valuable opportunity for dialogue and interactions among the leaders, anchored in their shared vision of ensuring a free, open and inclusive Indo-Pacific region. Close on the heels of the USA’s withdrawal from Afghanistan, a range of issues including the security situation in Afghanistan post-US departure are likely to come up.

The theme for this year’s UNGA General Debate that PM Modi is scheduled to address, is ‘Building Resilience through hope to recover from COVID-19, rebuild sustainably, respond to the needs of the planet, respect the rights of people, and revitalize the United Nations’.

BILATERAL TRADE BETWEEN INDIA AND USA
USA is India’s second largest trading partner, consistently achieving double digit growth each year. Due to COVID-19, there was dip in the bilateral trade, which is now poised to surge back. Bilateral trade stood at $150 billion dollars in 2019, $ 142 billion in 2018, $ 126 billion in 2017, $ 114 billion in 2016.

Key aspects of bilateral engagements in other sectors
DEFENSE: With Defense acquisition from US defense having crossed over $ 21 billion,  defense relationship has emerged as a major pillar of India-US strategic partnership with intensification of defense trade, joint exercises, personal exchanges, maritime security, and counter-piracy. US recognized India as ‘major defense partner’ in 2016. There is growing and increasingly sophisticated cooperation between the two Navies – the continued high level of operational interaction achieved in the MALABAR naval exercise. There is establishment of the new tri-service, amphibious exercise – TIGER TRIUMPH – as a tangible demonstration of the growing scope and complexity of military cooperation. Defense Technology and Trade Initiative, aimed at promoting co-development and co-production efforts, is working well.

ENERGY: Partnership is increasingly getting diversified across both conventional and renewable energy sources, with exports of U.S. LNG, crude oil, and other energy products to India, totaling over $9 billion to date.

SCIENCE AND TECHNOLOGY /SPACE: Over 200 research projects funded by National Institute of Health/NIH has created huge knowledge network of scientists and researchers who are collaborating on diverse projects. Conclusion of a new Science and Technology (S&T) Agreement in September 2019 will further strengthen collaboration on science and technology, particle research, and innovation. The close collaboration between their space agencies- ISRO has launched over 190 satellites from the Unites States through its commercial arm.

HEALTHCARE: Both countries have developed Rotavirus. Collaboration continues vis-à-vis Malaria, TB, Influenza vaccine. Bilateral institutions are jointly working on COVID vaccine also. Gilead has collaborated with 7 Indian companies to manufacture Remdesivir which will cost $ 72. – 6 days injectable course will be around $ 432.

BILATERAL TRADE BETWEEN India and South-East USA
With Indian diaspora of about 450,000 in the region, The Indian Consulate in Atlanta continues its outreach to the states of Alabama Florida, Georgia, Mississippi, South Carolina, and Tennessee and two territories including US Virgin Islands and Puerto Rico under its jurisdiction. At local level, Consulate has opened a Regional Atlanta Chapter of Indian American International Chamber of Commerce in association with Chairman and IAICC board officials for furthering trade and investment ties. It has commenced its operations in November 2018. A Mississippi State Chapter has been opened in January 2019 and South Carolina State Chapter in March 2021, for coordinating our efforts in those States. Department of Commerce of South Carolina has India Trade office since 2015 at Delhi.There is significant momentum on trade and investment front. South Carolina, at $ 1.7 bn dollars is the only state in SE region which has maintained its bilateral trade figures in 2019 in 2020 as well. On an average, SE region has over 160 Indian companies, about 54 in manufacturing sector and rest in services. In the total investment of over $13.5 bn, manufacturing constitutes about 12 bn and IT services constitutes the rest, creating over 12000+ for locals directly – manufacturing and services accounting 6000+ jobs, respectively. Indian companies have also invested millions of dollars in trade and sectors such as hotels. Motels, banks, convenient stores, health care sector etc.

INDIA – US REGULAR EXCHANGES AT THE LEADERSHIP-LEVEL
Regular exchanges at the leadership-level have been an integral element of the expanding bilateral engagement. The outcomes emerging from these visits have been instrumental in further strengthening the multifaceted ties between the two countries. Since assuming office in May 2014, Prime Minister Narendra Modi has visited the U.S. in September 2014, September 2015, March-April 2016, June 2016, June 2017 and September 2019. PM Modi last visited the US in 2019 when he attended United Nations General Assembly (UNGA). He also travelled to Houston, where he attended the ‘Howdy, Modi!’ event organized in his honor by Indian diaspora there. During ‘Howdy, Modi!’ event, he and then President Donald Trump addressed a huge diaspora event in Houston. President Obama paid a State visit to India in January 2015 and participated in the Republic Day celebrations as the Chief Guest. President Donald J. Trump paid a State Visit to India from 24 to 25 February 2020. PM Modi spoke to U.S. President-elect Joe Biden on 17 November 2020 to congratulate him on his victory in the U.S. Presidential elections on 08 February 2021 and reiterated their commitment to consolidating bilateral strategic partnership. The two leaders also held a telephone conversation on 26 April 2021 committing to work closely together in the fight against COVID-19. PM Modi spoke to Vice-President Kamala Harris in June 2021. PM Modi participated in the Quad Leaders’ Virtual Summit on March 12 2021, and Leaders Summit on Climate April 22-23, convened by President Biden.

The India-US relations enjoy strong bipartisan support in the US Congress. The ‘India Caucus’ in the US Congress comprising of the Senate Indian Caucus and the House Caucus on India and Indian Americans is the largest single country Caucus in the US Congress with over 150 members. The Senate India Caucus is led by Senators Mark Warner (D-VA) and John Cornyn (R-TX) and the in the House of Representatives, it is led by Congressmen Brad Sherman (D-CA), Steve Chabot (R-OH), Ro Khanna (DCA) and Michael Waltz (R-FL). The Caucus regularly meets to discuss important issues related to the India US relations and recently, led a resolution in the House of Representatives titled “Urging the Administration to facilitate assistance in response to the devastating impact of COVID–19 in India.” This bipartisan resolution was passed in the House of Representatives in a unanimous vote reflecting the strong support for India on both sides of the aisle.

US to ease travel curbs for fully vaccinated foreign visitors

By protocol, Kamala Harris will be Modi’s host in Washington