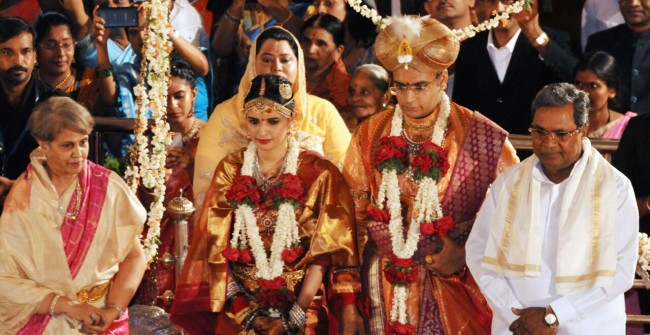 “Yaduveer tied the nuptial knot with Trishika in the traditional South Indian style during the auspicious time (9-10 a.m.) at the ‘akalyana mantap’ (wedding canopy) in the Durbar Hall,” said palace official M. Lakshminarayana.

Sporting the royal crown and clad in a cream ‘bandhgala’, Yaduveer, 23, and bride Trishika, 22, in a red silk sari, exchanged jasmine garlands and poured handful of rice over each other’s head, signifying life-long prosperity and peace for the couple.

The tying of the ‘mangalsutra’, the sacred necklace, was preceded by various rituals and followed by the couple taking seven rounds around the holy fire.

The young princess was escorted to the mantap by her parents — Maharaj Kumar Harshavardhan Singh and Rajkumari Maheshri Kumari of the erstwhile princely state of Dungarpur in Rajasthan.

As per the Wodeyar’s dynastic traditions, the elaborate wedding ceremony began with invocations to the royal family deity Hindu Goddess Chamundeshwari and worship of its raj-guru Abhinava Vagheesha Brahmatantra Swatantra swami of Parakala mutt amid chanting of Vedic hymns and Carnatic music.

Besides mother-queen Pramoda Devi, who adopted Yaduveer, and three sisters of her late husband and last scion Srikanttadatta Narasimharja Wodeyar, family members and relatives of the groom and bride were present in the Durbar Hall along with about 500 guests and special invitees.

Yaduveer was adopted on February 23, 2015, and crowned as the 27th titular Maharaja on May 28, 2015. He is the grandson of princess Gayathri Devi, eldest sister of Srikantadatta and eldest daughter of the last reigning Maharaja Jayachamarajendra Wodeyar.

An arts graduate from the Massachusetts University in Boston, US, Yaduveer was engaged to Trishika on his return from the US last year.

The newlyweds will sit on a decorated swing in the Durbar Hall between 7.30-8.30 p.m. on Monday for a private reception being hosted for about 50 royal families from across the country, Wodeyar’s relatives and VIPs.

About 2,000 special invitees from the state and across the country have also been invited for the grand reception on June 28 night in the Durbar Hall.

“The couple will go on a procession on June 29 in a decorated motorcade within the palace precincts for public viewing,” the official added.

The majestic palace in the heart of the state’s cultural and historic capital, about 150 km from Bengaluru, has been decked up and illuminated for the grand event, four decades after Srikantadatta married Pramoda in 1976 in its Durbar Hall.