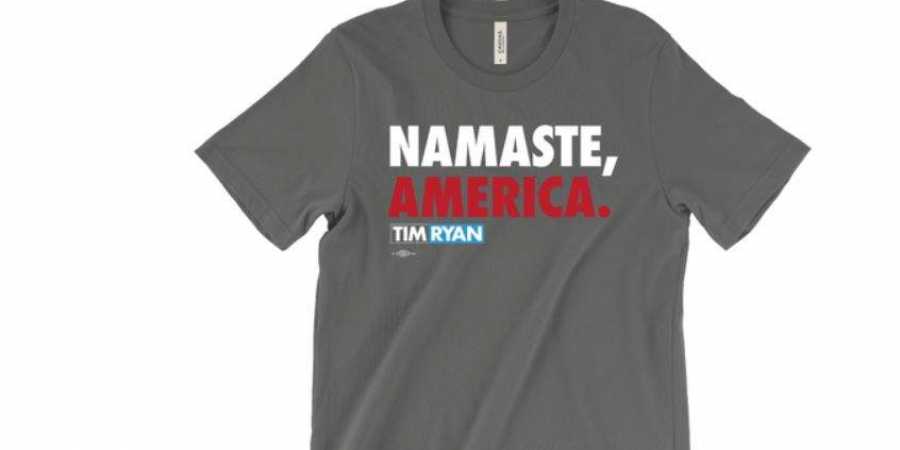 Washington, Aug 30 (IANS) Tim Ryan, Ohio Democrat and a 2020 presidential hopeful, has endorsed a grey t-shirt with “Namaste America” written on it, as part of his campaign merchandise amid growing calls for more diversity in US politics, a media report said.

The t-shirt had “Namaste America” written in red and white, colours of the US flag, along with a logo of Ryan’s presidential campaign neatly placed underneath it, The American Bazaar said in its report on Thursday.

It is available on the timryanforamerica.com, and is priced at $25.

Although, Ryan and his campaign team might have released the tees as a part of a well-thought plan. But the merchandise has appeared a bit misplaced and even confusing to many of his followers on Twitter.

One user tweeted: “Can you tell me and the Indian American community what’s the purpose of this t-shirt? And why is the Hindi word for hello categorized under ‘mindfulness’? Is your campaign about mindfulness? I don’t get it, and would love an explanation.”

Another user wrote: “Tim, do you know what this shirt means.”

Another user tweeted: “You know you are running for president not yogini. Right?”

“Honestly everyone would assume, this is Tulsi Gabbard merch,” one more use tweeted.

Ryan, 45, is one of the younger candidates in the crowded field. He ran an unsuccessful campaign against Nancy Pelosi for House speaker in 2016.

Ryan represents a congressional district in northeast Ohio where the manufacturing industry has experienced setbacks, most recently with General Motors’s decision to wind down operations at a plant in Lordstown.

He was first elected to the House in 2002. Before becoming a member of Congress, he served in the state Senate and was a Congressional aide.