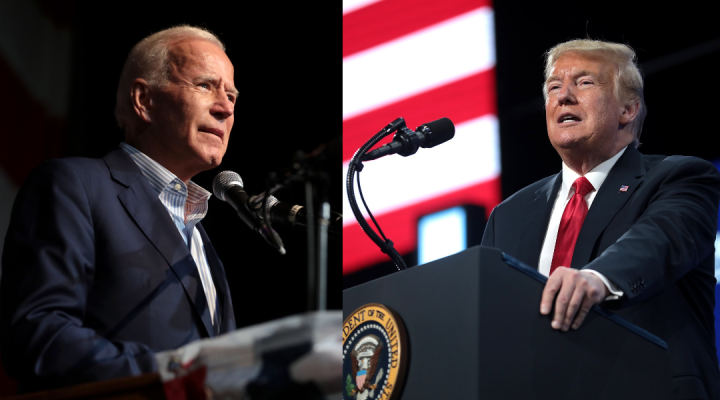 The Presidential Election is entering its final phase. Unlike past elections, the presidential primaries were uneventful as neither the candidates, nor their programs generated any interest in the party men of either parties, nor in the common voters. The Republican Party had no choice but to go with the incumbent President. However, the Democratic party failed to present an energetic and dynamic alternative to Donald Trump.

If we look back at the 3 years and 9 months of Trump– a surprise 2016 election outcome which he himself has no clue how it happened– it was a great opportunity for the President to prove what a non- career politician presidency can be like. He had the anger and frustration of ordinary Americans as the political capital. Americans were fed up with career politicians, their empty promises recycled election after election. A section of Americans expected President Trump to put his promises into practice. President Trump thus had the advantage of low-performance expectations, unlike his predecessors. Americans were not expecting President Trump to change as a person, uphold high moral integrity and family values and show empathy. The people, however, expected him to be the man of action, expected him to be a President of Americans solving their day to day problems– care for their safety and security, care for the economy and confronting the major problems of America such as immigration, unemployment and an end to unnecessary wars. Over and above, Americans expected President Trump to act decisively to save America from plunging into a consumer economy, bring industry and innovation back to America and maintain its superpower status.

Trump knew well that the Republican career political leadership did not help him win the election. On the contrary, a good number of Republicans colluded with the opponents to defeat him. Trump therefore was not in a mood to share the credit for winning the Presidency with anyone except his family. Trump’s distrust of Republicans continued after winning the election and he would not induct many into his cabinet because of trust deficit. A few who stood with Trump during the campaign became part of the Trump Administration but their self-ambitions and incompatibility with the inner circles of Trump team, forced them to exit one after the other. Some were fired, rest were smoked out. A few self-respecting members in Trump’s team sought voluntary exit after a short duration of service as continuance in the Trump administration for them became untenable. In a nutshell, Donald Trump could not build a team that could aid and advise him as President. A good chunk of the Republicans later realized that a continued standoff with the President is going to cost them more politically and started aligning with him. This realization within the Republican politicians protected Trump during critical stages such as shielding him from the onslaughts from Democrat stalwarts like Nancy Pelosi, The Muller investigations, the impeachment motion, and funding and confirmation of Trump nominees as judges.

Trump’s distrust towards the Republican politicians however remained without much change. So were Trump’s rhetoric and encounter with media. Trump maintained his unpredictable, coarse approach in his interaction with the press and media. Trump preferred to reach out to his audience directly through social media in his own style. He appeared to lose stature internationally despite his having successfully eliminated ISIS, ending the wars in the Middle East,  brokering peace between Israel and Palestinians, UAE and some other Arab countries. Trump is largely seen successful in controlling terrorism and a man who could stand against China’s manipulations, North Korea’s belligerence and duplicity of countries like Pakistan. On the home front, Trump was lucky to have a strong economy, a bullish stock market and the lowest ever unemployment until COVID-19 hit American shores.

The Democrats, having wasted the golden opportunity to implement their flagship agenda in the eight years of Obama Presidency even with the initial years having the White House, Senate and House of Representatives with them, this was an opportunity to introspect the reasons for the loss, put President Trump on check, remind him of his promises and expose the wild person in Trump and regain the power in 2020. On the contrary, Democrats could not come out of the shock of defeat in 2016, an election outcome they miscalculated, prematurely prepared for celebrating success of the American dream of occupying the White House by a woman was shattered in the most unexpected way. In the 2016 elections, the American voters declared that when it comes to pragmatic politics, morality and character of the person is secondary to them.

Instead of preparing themselves for the 2020 elections, the Democrats focused on questioning the legitimacy of Trump’s election as President. They started bringing popular votes versus electoral votes controversy. The Democrats questioned the election process and the interference of foreign, specifically Russian,  intervention in the electoral process to discredit the election. Sometimes the Democrats’ argument expanded to such an extent that they were forgetting that the entire election was supervised and held under a Democrat administration. Both the President and the Democrats adopted an attitude of my-way or high-way, completely ignoring the American public. The impeachment motion was another disaster.

With a strong economy, lowest unemployment, low political capital and a choice of a 4-decade old veteran career politician as a Presidential candidate, Trump’s win in the 2020 election was a done deal. However, the spread of COVID-19 and the number of deaths because of this pandemic changed the dimensions of the elections. The number of people who died of the pandemic in the USA is higher than any other country in the world. The rhetoric and out of turn utterances by the President, and the resultant perception that he and the scientific community are not in alignment with the efforts to fight a pandemic of this magnitude helped the Democrats to present a perception to the Americans that character and empathy are an important ingredient in the President to deal with global calamities of this magnitude. American voters are sensitive to the loss of American life, be it because of war, pandemics or natural calamities. Trump failed to assess the mood of the people in this respect. However, hard he tries to explain that he did his best (a matter of perception again) to contain the death toll, the count is huge and well in front of the voters. It is secondary whether the extent of death would have been less had another person other than Donald Trump was the President. This is the time the empathy and character of the person counts the most. Will President Trump be judged on his overall performance during the past 3 years and 9 months or based on the number of life lost due to COVID-19 is a matter few hours from now.

Irrespective of what the election outcome is going to be on Nov 3, the American hardship because of the situation created by the pandemic is unlikely to be easy in the months to come. There is no clear-cut strategy difference between President Trump and Vice President Biden. They both are going to be relying on the same scientific community for any kind of respite. Vaccine will take its due course to get developed and distributed irrespective of the person getting elected. Police excesses on American streets will continue to happen. There is no indication that gun violence will end, the drug mafia will be controlled, and innocent youth will be saved. Healthcare cost will continue to skyrocket, wildfires, hurricanes and other national calamities will continue to rob American life and wealth. And in 2024 you will see a new set of Republicans and Democratic candidates seeking election telling us that this is the most important elections in the history of America because of Abortion Rights, Gun Violence, Supreme Court nominations, Affordable Health Care, Climate Change and Sinking Social Securities and what not.

About the Author: Atlanta-based Mohan Nair is a keen political observer and closely follows US and Indian Politics. More Blogs at http://sabrimala.blogspot.com, Twitter: mohanMNair

I’m truly overawed by your writing. How beautifully you have captured the mindset of the reader by giving a clear, crisp account of the ground realities. This is true journalistic touch I find, in your detailing. Without ruffling feathers, you happen to detail both the sides of the coin yet you remain neutral to the cause. That’s the journalist in you. Pls keep it up. Your language is simple without too much adjectives for the ordinary man to catch the meaning fully. Great Job