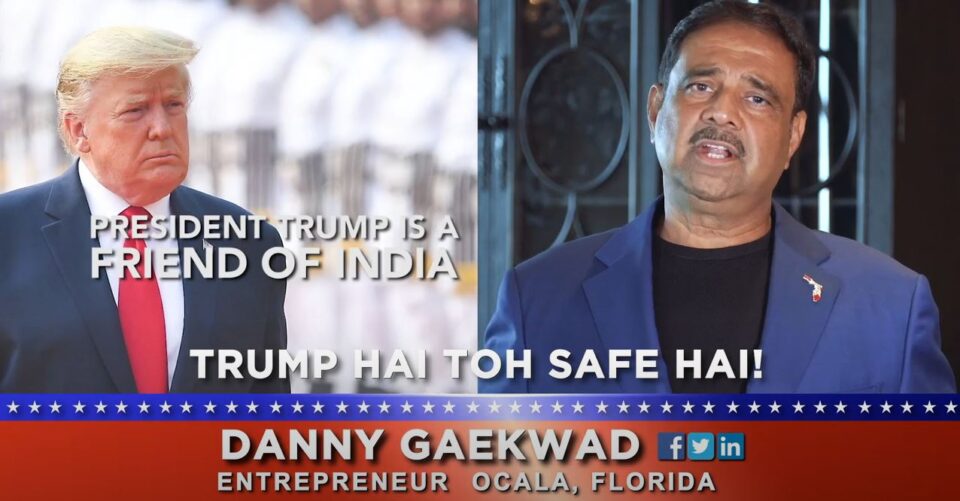 New York, Oct 20 (IANS) Safety, the economy and friendship for India are the themes of video ads supporting US President Donald Trump produced by an entrepreneur in the duel of the two political parties Indian-American votes in key states in the November 3 election.

“When I heard Trump had Covid-19, I said, ‘What the hell, I must gear up and do something for this guy rather than stay home and fume about the news’,” Danny Gaekwad, who has produced a series of video ads backing the President, told IANS about his foray into the campaign.

Describing himself as a grassroots political activist who has stayed away from national politics and has supported both Democrats and Republicans, Gaekwad said that he made an exemption for Trump because he is a “real guy” who “supports India 100 per cent”.

He said that till he met Trump he had been turned off from national politics because at that level most leaders were “fakes” and working at the grassroots for local, state and federal legislators was more effective.

Gaekwad, who traces his lineage to the family that had ruled the Baroda princely state, is a serial entrepreneur, developer and investor, is a member of the advisory committee of the ‘Indian Voices for Donald Trump’ campaign.

Two of his ads on the theme, “Trump hai toh safe hai” (With Trump we’re safe), feature clips of him speaking in Ahmedabad earlier this year about the “special place” India has in his heart and extolling Indian-Americans.

About the stress on safety, Gaekwad said that Indian-owned businesses were looted and burned during the Black Lives Matter protests backed by the Democratic Party against police brutality and racism.

He asked: “Is this the Democratic agenda? Indian lives don’t matter?”

His videos are straightforward, with direct messages, unlike the video for the Democratic Party candidate Joe Biden with Bollywood music.

Another video released on Monday by Gaekwad makes an appeal to the purse, especially of businesspeople, extolling Trump’s economic record as president and as a job-creating entrepreneur while attacking Biden’s policies and his personal career of 47 years on the public payroll.

In the ad, he also defends Trump’s record in the pandemic crisis asserting that he acted fast and also helped saved businesses like his hotels through the program to help with payroll when the occupancy plunged.

He takes another jab at Biden, calling him a “China lover”.

Besides circulating on social media, Gaekwad claimed that his ads are running on several TV programs.

Another Trump video ad was circulated earlier this year by the Trump campaign on social media with clips from Prime Minister Narendra Modi’s “Howdy Modi” rally in Texas last year and Trump’s Ahmedabad “Namaste Trump” meeting this year, with both leaders proclaiming their and their nations’ close friendship.

Credit for the ad’s concept was given to Al Mason, the co-chair of the Trump Victory Indian American Finance Committee.

Kimberly Guilfoyle, the chair of the Trump Victory Finance Committee, tweeted soon after its release: “America enjoys a great relationship with India and our campaign enjoys great support from Indian-Americans.”

Although Indian-American voters are estimated to number only about 1.3 million, they could make a difference in the swing states where neither party has a lock on the voters and could go either way with small margins.

The electoral college made up electors representing states gave Trump the victory in 2016 although he got 2.8 million fewer votes than Hillary Clinton.

She lost one of the swing states, Wisconsin, by just about 10,000 votes.

Explaining why he shows up in two of the videos with a gun, Gaekwad said that he is a strong defender of the Constitution’s Second Amendment giving citizens the right to bear arms, having grown up in India with guns and with a son in the US Army.

Gun rights, which the Democratic Party wants curbed, are an important issue for Trump supporters.

Gaekwad traces his lineage to the Gaekwad family, which was once the ruler of the Baroda princely state.

Asserting that he supported many Democratic politicians like House of Representatives member Raja Krishnamoorthi, Maryland state legislator Kumar Barve and former Iowa state legislator Swati Dandekar, and others he said that he backs all Indian-American candidates in elections at all levels a” as long as they were not anti-India.

Indian-Americans as a tiny minority have to support candidates from the community realising that “if we are not at the table, we will be on the menu”, Gaekwad said.

Asked why then he was not supporting Kamala Harris, the Democratic Party’s vice-presidential candidate who is of Indian descent, he said: “Her comments are anti-India.”

“I am not gonna help Kamala Harris who is running against my candidate Donald Trump” who “stands by his friend India”, he said.

Gaekwad claimed that he has not seen Harris proudly say on national TV that she is Indian-American and her recent overtures to the community are only because she thinks it is like a bank cash dispensing machine.

“We have to ask what we get in return” for supporting a candidate, he said.