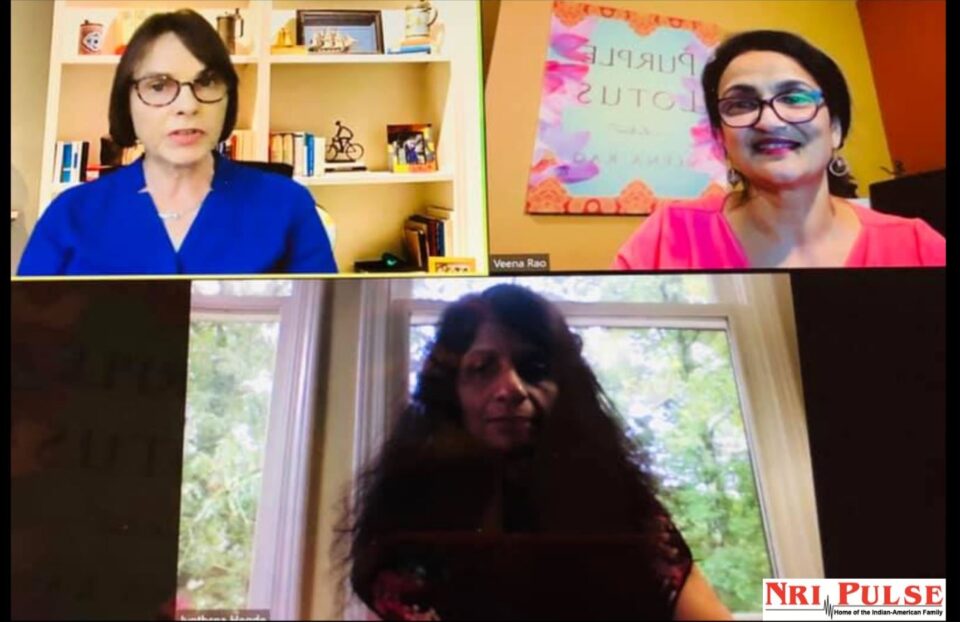 BY JYOTHSNA HEGDE
(With inputs from Veena Rao)

Atlanta, GA, October 26, 2020: In our ongoing series, NRI Pulse is interviewing Georgia’s political candidates ahead of the November 3 elections. Angelika Kausche, (Democratic Party), running for re-election to the Georgia House of Representatives to represent District 50 spoke to us recently.

Kausche received a master’s degree in business administration from Universität Trier in Germany. She received her second master’s degree in organizational communication at Western Michigan University. Her career experience includes working in banking and as an adjunct professor in Michigan and North Carolina. She has served as a member on the Rotary Club of Johns Creek North Fulton.

Uma Palam Pulendran of They See Blue facilitated the interview.

In your first run for office, you won a State House seat in Georgia. In a district where Democrats had earlier not even bothered to field a candidate, what prompted you to contest the election?
We became US citizens in 2011 so my family decided to stay here. We moved to Georgia in 2015. I got a little involved in local politics, and then 2016 happened and I felt that I could no longer stand idly by. I felt strongly that this country was going, in my perspective, in the wrong direction and I felt like I chose to become a US citizen and we did this wholeheartedly. So, I felt the need to stand up to my promise which I made for the country. I decided to run for this house seat especially because the democrats couldn’t find any other viable candidate or anybody who said, “I’m going to do this”. It was a tough race and very close. I won the election by only 317 votes in 2018.

Do you think the South is now more accepting of diversity?
Atlanta is very welcoming of immigrants and people from outside the US, and across the world. I believe that in the urban and suburban areas that is true.  I think this is a country that was based on immigration and immigrants have always contributed to the prosperity of this country. We need to continue to integrate immigrants into our society, because we all benefit from people coming in here and really wanting to make the best of it.

What are your top three priorities for your district?
People are concerned about healthcare, especially during the pandemic. Many people lost their healthcare insurance, so healthcare is at the top of the list. There’s also education. And of course, it all goes together with the pandemic, and bringing the economy back on track.

You and your husband tested positive for coronavirus and recovered fully. Has this experience impacted you in terms of working on policies?
Many people lost healthcare during the pandemic. I never thought I would be in this situation where we have a lot of families here in our district come to us for help. They weren’t in the position before. So, my husband and I, we were very fortunate we have good healthcare, we can seek security.  Too many people in the state of Georgia cannot access the care they need and deserve. So, I’m committed to working on bringing affordable quality healthcare to Georgians when reelected.

More schools are talking about reopening. What are your thoughts about this and how can we make it safer for kids to return to school?
Education happens to be one of my top priorities. Opening schools is an incredibly tough decision to make because basically there is no good answer. We have to balance the interests of teachers, parents, students, staff and administrators. I say the safety of the kids comes first and then the teachers. I believe the individual school districts should make the decisions because every school district is different. At minimum, we need to adhere to the safety regulations like wearing masks, and keeping social distance.

Georgia is one of 14 states that did not expand Medicaid. House Minority Leader Bob Trammell urged Gov. Brian Kemp to use his increased public health emergency powers to expand Medicaid under the Affordable Care Act. How do you think this has affected healthcare in GA?
The policy decision to not expand Medicaid meant that we had roughly 500,000 people without health insurance because they were too poor to get their own health insurance but a little over the federal poverty thresholds. They did not qualify for Medicaid pandemic. We probably have a couple of hundred thousand people that qualify for Medicaid because so many people got laid off. You have to think twice before you go see your doctor, so many people may make the decision not to seek the medical care they need. They not only put their own health at risk, but also the health of others around them. In addition, this means that Georgia decided to leave $3 billion in federal money on the table, basically just saying, we don’t need this money. Right now, we really could use this money to help lots of people to get back on track. I fully support my Democratic colleagues’ call for expanding Medicaid and bringing healthcare to those Georgians who deserve and need it right now because it will help us. It will also create jobs.

Given the protests and riots, with regards to the Black Lives Matter movement, what are your thoughts about criminal justice reform?
We have lots of things to do in our nation and in our state to address criminal justice reform. Black and brown people are significantly discriminated in the States.  As a state legislator, I had the opportunity to visit Fulton County jail and the majority of the people were black. So, I would say, we need criminal justice reform. There’s a lot to do. But I also have to say it was a great movement because here in Johns Creek, the community really came together, and we have several peaceful protests. To be honest, the police and local officials were just exemplary. As tragic as these events were, I hope that they will bring us more together.

What are your thoughts about defunding the police?
I cannot support this. This is basically rhetoric that is not very helpful because it’s very divisive. When I talk to the police in the state and local police and ask them what we need to do to help them help us. Communities, especially minority communities are very suspicious of police. We have to find ways to rebuild the trust between police in these communities and to do that, I think we need to reform policing. And second, we need to do something about mental health and that brings me back to healthcare. Police need to be better equipped to handle these situations. We have to put more into training. I’m very hopeful because I know we have community activists in police. They are working together in the city on finding new ways to address these issues and really working on rebuilding the trust between the police and the communities. It also will take some soul searching about the discourse of race, and racial injustice in the state and in the country, in our own biases.

There were long lines and accusations of voter suppression in Georgia during the primaries. What are your thoughts about this?
We had the rolling out of new voting machines during the pandemic, and lots of things went wrong. It basically showed us there are technical and systemic errors in our voting. We absolutely have to make sure that we protect the right to vote, we protect the franchise, and make sure that every person has the right to vote. As an immigrant, I feel very strongly about it because I took an oath on our Constitution and I take that very seriously. And I also come from a country that has a disturbing history of disenfranchising people. So, for me, this is just something we cannot have, and I will do everything in my power to make sure that we make the system accessible to everyone. And on the other hand, we also educate people and constituents of how they can vote.

More and more Indians Indian Americans, who have never been politically inclined before, are coming out to support your campaign. What do you know about these people and their culture? Why should the community vote for you?
I live in one of the most diverse districts in Georgia and we have a really huge Indian community here and they have been the backbone of my campaign in 2018. I also have very close ties into all communities. As an immigrant myself, I understand how confusing voting in the US can be. It really took me a while, and I went through the process of understanding how democracy works in the US. People only care about national elections and I came in and said, you know what, the difference we can make is at the local level. This is where you have the most influence, this is where we decide on the issues you care about– like education. These are the things we decide at the local level to directly impact people’s lives, where they live in, where they spend their tax dollars. I spend a lot of time paying attention to local elections because this is where you can have influence. This is also where you can build a connection with your legislator because everybody has my cell phone number. You can just give me a call. I make it a point to really reach out to the immigrant community, and really integrate them in our democratic process because this is so, so, important. I want to continue the work as your voice in the community. I strongly believe that we have to follow science, and facts. I want to work on the issues you care about.

You are living proof of the American dream. What are the best things about this country?
I really like the idea of opportunity, of the entrepreneurial spirit. People come here for different reasons, some come here for education, or to become educators, researchers, open a business or many come just to find a safe place for their families. With all our diverse experiences, we can bring so much to this country and make it better. I really believe that is what I like about the American spirit and what encouraged us to become US citizens and what I hold dear and really hope to preserve in the future. It is also one reason why I ran for office.