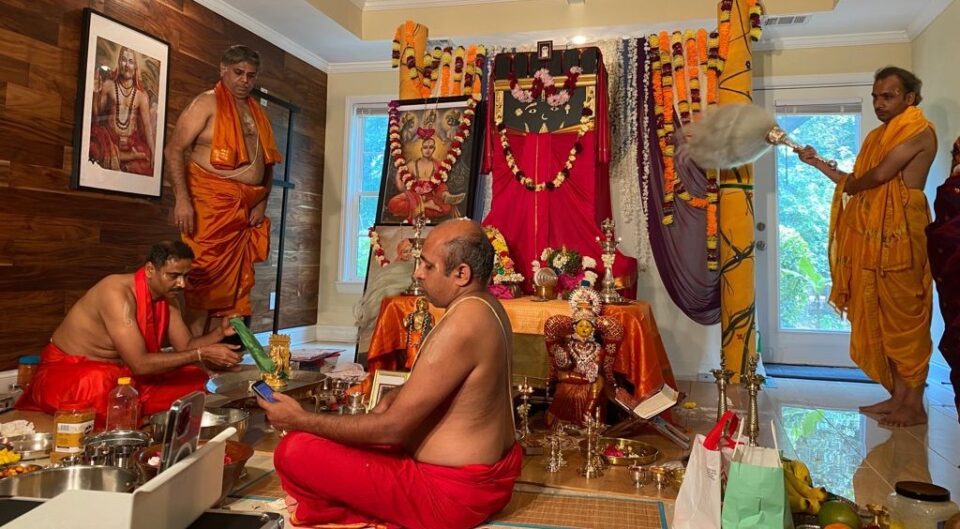 Atlanta, GA, September 24, 2021: The Ananthaadi Raayara Matha of Atlanta (RAMA) celebrated the 350th Aaradhana of Shri Raghavendra Swamy (Rayaru) on August 28, 2021 with devotional fervor and traditional customs. Traditionally a three-day event, owing to the ongoing pandemic, the RAMA organizers held a one-day virtual celebration, with very few people gathered to perform the rituals. The actual dates of the Aaradhana for the year 2021, according to the lunar calendar were August 23, 24 and 25, 2021. The event was telecast live on Facebook, and devotees had the option to perform sponsored pooja at their residence via google meet.

An all-day event, the virtual celebrations began early in the day at 8 am with the traditional Kanakabhisheka, Mukhya PraNara abhisheka, Rayara pooje including Astottara seva, paaduka seva, panchamrutha abhisheka, Mangalarathi & Prasada, Pallaki Seva, Unjal Seva and cultural programs. Well over 20 performances including from students of Gokula, and Kalpavruksha of RAMA Gurukula, along with many other devotees enhanced the devotional aura of the occasion. Concluding with evening Aarti, the Aaradhana, which means expression of devotion, was amply displayed at the celebrations.

A Hindu scholar, theologian and saint, and a prominent guru of the lineage of Madhwacharya, Guru Raghavendra’s diverse oeuvre includes commentaries on the works of Madhwa, Jayatirtha, Vyasatirtha, interpretation of Upanishads from the Dvaitaand standpoint a treatise on Purva Mimamsa. An accomplished Veena player, he has composed several songs under pen name Venu Gopala. He served as the pontiff of Madhwacharya Mutt at Kumbakonam between 1624 to 1671. His Brindavana, where he is believed to have entered Jeeva Samadhi at Mantralayam in Mantralayam, Andhra Pradesh attracts thousands each year.

Raghavendra was born as Venkatanatha in the town of Bhuvanagiri, Tamil Nadu into a family of musicians and scholars. His great-grandfather Krishnabhattar was a tutor to Vijayanagara king Krishnadeva Raya and his father Timmanacharya was an accomplished scholar and musician.

Each year, the day he entered Jeeva Samadhi at Mantralayam and believed to live in a metaphysical form for 700 years, is observed as the Raghavendra Aaradhana. Aaradhana is celebrated on the second day during the Shukla Paksha in the month of Shravana, as per the south Indian calendar. Generally, it is three-day celebration, the first day known as Purva Aradhana, the second day, Madhya Aradhana and the third, Uttara Aradhana.

One of Rayaru’s closest disciples, Appanacharya reached the Brindavana only after Rayaru had already entered into the Brindavana and his Poornabodha, the song extempore and an outpour of complete devotion was composed as he began swimming in the swirling waters of the Tungabhadra towards the final resting place of Raghavendra. Raghavendra Swamy himself is said to have completed it by uttering the last few lines from the Brindavana. One of the most authentic works on Raghavendra Swamy is a book by the same name called Raghavendra Vijaya, a closest to biography, penned by Nayaranachar, the son of Raghavendra Swamy’s sister.