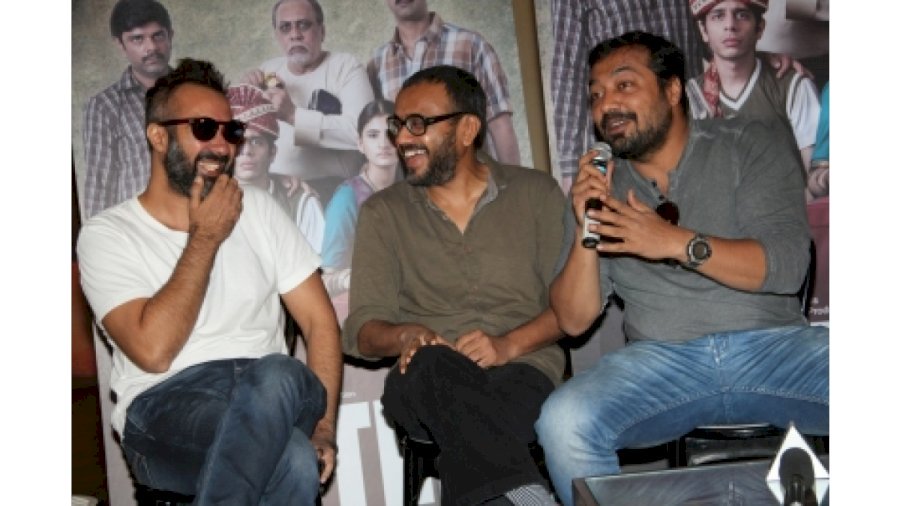 Mumbai, July 21 (IANS) Filmmaker Anurag Kashyap and actor Ranvir Shorey have been engaged in a war of words on Twitter, after the actor took a jibe at independent filmmakers.

It all started with Ranvir’s tweet, which read: “So many independent-film-crusaders have turned mainstream-bollywood-flunkies now. These are the same people who used to rant 24/7 about the “system” for attention before they were given entry into the pearly gates of mainstream Bollywood. #Hypocrisy much?”

In his tweet, Shorey didn’t name anyone, but alleged hypocrisy on the part of a few filmmakers. Kashyap took offense.

“Do you really mean that @RanvirShorey. If you do please explain . Please say exactly what you mean and whose flunky is who?,” Kashyap responded.

It led to a war of words between the two.

Ranvir responded to Kashyap saying: “I always say what I mean, @anuragkashyap72, you know that. And I don’t think what I’ve said lacks any clarity. It pretty much explains everything. As for taking names, that’s beneath me. I’m not trying to sling mud, but just reminding people where they come from.”

To which, Kashyap replied: “So let’s talk. Right here. Whose flunky you think I am? Dont mix the pain of your past relationship with this debate. I will say everything here .. the correction is needed in this industry like every industry . I operate alone .. bolo.”

Ranvir again stressed that he didn’t mention Kashyap’s name, saying: “I didn’t mention you, so why don’t you confess whose flunky you are, if you’re so gutted by what I’ve said. And I don’t understand what you mean by “the pain of my past” nonsense. Don’t try to be my shrink. I assure you, I work even more alone than you!”

Kashyap claimed that he has worked with many outsiders, and stressed that he will not allow anyone to change the narrative of the debate going on in Bollywood at the moment.

He wrote: “And no one works with outsiders more than me .. and I can see what’s wrong with all that is going on and I see the game. Being played and people being used . Trust me I am not gutted by what you said , no one could gut me in 27 years .. and I am absolutely calm ..And I will say this clearly – I am speaking here with you because I won’t allow you or anyone to distract or change the narrative of how the industry is being used. I won’t allow you to change or create the perception about me and make. Anyone believe otherwise. I will stand here and speak up.”

Ranvir shared that Kashyap is “making the mistake of carrying the mantle of “independent film crusader” all by himself.

“Let me remind you, independent cinema has been and always will be more than you. So you be you, and let others be themselves. Don’t belittle others when they’re crying out,” he shared.

To which, Kashyap replied: “Oh so you weren’t talking about me? That’s incredible. Totally my fault that I misread you. Which means my replies were totally unnecessary and unwarranted. Cool. Coming to belittling – who did I belittle? Exactly?? I thank no that one is directed at me for sure?”

Ranvir refused to back down.

“How many people are you belittling when you say they are “distracting or changing the narrative”? Who are you to control the narrative? Everyone has the right to talk about their pain, just like you! And yes, your replies to me were unnecessary. I’m not here to make a spectacle,” he shared.

Then, Kashyap said: “Okay. I buy that. You see Kangana’s outburst as her pain. Fine. I will agree to disagree, Ranvir Shorey.”

Ranvir concluded by saying, “Again, I wasn’t mentioning any names, you are. Who is to say who is in real pain and who’s an attention seeker? I’m just defending everyone’s right to speak their own truth. Just like you do. You can agree or disagree”.

College admission: 5 ways students can make a difference during the pandemic