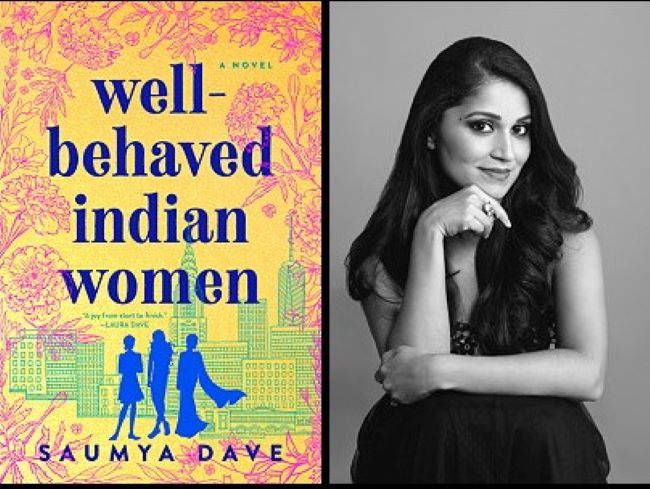 A mother is our consolation in sorrow, our hope in misery, and our strength in weakness, quotes the wise philosopher Khalil Gibran. The relationship between mothers and daughters tend to be even more involved, deeply rooted, and ever-evolving, especially when daughters turn mothers and mothers turn into grandmothers. Author Saumya Dave, in her debut Well-Behaved Indian Women explores the ever-evolving, ever-loving relationship of three generations of women, as they find solace in each other on their own tumultuous path of self-discovery. While one bears the guilt of perhaps not having done enough, another fights demons of past abuse and the other is burdened by her passion and choices. Dave delightfully binds their roots in a bond that can weather the storm.

Dave presents her story in the third person and in the present tense. Heavily conversational, most of the saga unfolds in dialogue exchange between the characters.

At 26, Simran Mehta is the dream child of her Indian-American parents, doctors Nandini and Ranjit Mehta, enrolled in grad school at Columbia for psychology, and engaged to her high school sweetheart, a medical student at NYU. But Simran always sees herself as the second favorite compared to her brother, who followed his parents’ footsteps in profession and married his bride, the big fat Indian wedding way. Simran harbors a passion for writing but must pursue psychology as a profession to live up to her family’s expectations. So, while her parents throw a party in celebration of her book, it is made perfectly clear that writing is encouraged purely as a hobby. Simran’s life takes a spin when she bumps into a dashing newspaper columnist, Neil, whom she admires, at her own party. The parameters that defined Simran quickly start to alter as she finds herself painfully attracted to her idol and loses interest in psychology. She fails to find comfort in her mother Nandini, the picture-perfect wife and mother who seemingly balances personal and professional life on the outward but is actually on an inward battle of her own– professional crises and the looming personal history behind the reason she often chooses to sacrifice her career or puts up no fight when her husband’s family brazenly interferes in her space. A visit to her grandmother Mimi in India unravels many hidden family secrets and the truth sets them free, leading Simran, Nandini and Mimi onto inward journeys to find their centers that define them as individuals.

Despite the title bearing a specific culture type, the appeal of the premise is universal.

I easily related to being raised to the pedestal of “Well Behaved Indian Women”, and the constant pressure to stay put, especially on the exterior, mental health issues be damned, lest it dampens the glory of coveted “Well Behaved” title.

Certain aspects of the narrative strike a chord with women, especially Indian, like the constant need of women to please everyone around them, the peer pressure to excel academically and economically, the conflicts amid generations and, anxiety and distress that mounts on the women in the family to compromise but never complain, be it in their careers, opinions, or personal tragedies. And some of these issues are ubiquitous, too. Case in point, the way the world perceives a woman’s job over her husband’s, as Dave writes, “Over time, Nandini understood the difference between how people saw her husband’s career and how they saw her own. He was allowed to be consumed by his job. If he made it to Ronak’s baseball game, people lauded his devotion to his children. If she did the same, they accused her of not being focused enough on her career.”

The author also addresses issues of first-generation Indian-American kids and the various ways they deal with them. Modern-day similes such as, “Her mind wanders like it’s a self-made Wikipedia maze,” are refreshing.

Along with references to Indian food, deco, and way of life, the Indian cultural mindset, particularly regarding the relationship of the girl with her in-laws, occupies significant space. She hears her own mother’s voice: The relationship with the man’s mother is very important.

I wished the author had sunk a little deeper into Simran’s misgivings about pursuing psychology and added more flesh to bite into, to help the reader understand her eventual decision. I do commend Simran’s choice nevertheless, and Dave’s ambitious effort to bring passion to the forefront.

At one point in the novel, Dave compares Nandini to Kunal’s mother, Meghna Patel –  A well-behaved name for a well-behaved woman. If they were both attending a Bollywood soap opera casting, Meghna’s heavier build and conservative salwar kameez would make her a shoo-in for the part of “nurturing housewife who makes twenty rotlis a day,” while Nandini’s white coat and under-eye circles would land her the role of “bitchy mother who chose to work full-time.” The Indian references aside, the sentence encapsulates a universal predicament working women all across the world find themselves in and yet find themselves either being judged or being judgmental themselves. Who is to determine the right from wrong? Dave’s Simran realizes that the answer lies within each woman, and how far she is willing to go to take a stand, pursue her dreams or simply enjoy being successful without being judged for it, whether she is deemed “Well-Behaved” or not.

Saumya Dave is a psychiatrist and mental health advocate. Her essays, articles, and poetry have been featured in The New York Times, ABC News, Refinery29, and other publications. She is the co-founder of thisisforHER, a nonprofit at the nexus of art and women’s mental health, and an adjunct professor at Mount Sinai, where she teaches a Narrative Medicine class. She recently completed her Psychiatry Residency at Mount Sinai Beth Israel, where she was a chief resident and an inductee into the AΩA Medical Honors Society. She currently resides in New York City with her husband and son. This is her first novel.