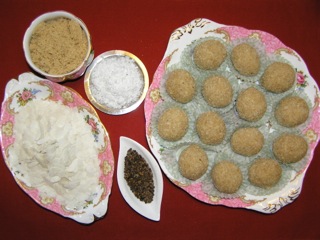 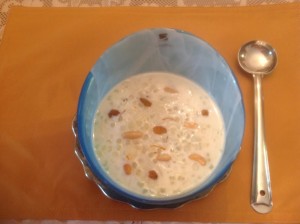 Mehtod: In a pressure cooker, bring 1 cup water to boil. In a mixing bowl, mix a half cup sabudana and one and half cups water. Place mixture in pressure cooker, cover and cook until it whistles three times. Turn the heat off and cool it until pressure subsides.

In a blender blend half cup cashew pieces and one-fourth cup almonds with water into a paste.  Set aside.

In a four-quart sauce pan, heat ghee on medium low heat and fry two tablespoons of cashew pieces, two tablespoons almond pieces, and raisins until light brown. Transfer them with a slotted spoon onto a plate. Return the saucepan to the stove. Add milk and boil for five minutes. Add cooked sabudana while mixing. Continue cooking sabudana until the grains start to become clear. Add cashew paste, condensed milk, sugar, and cardamom powder. Cook for ten minutes on low heat mixing continuously, being careful not to let it stick to the bottom of the pan.

Add saffron and mix thoroughly and cook for one more minute.

Transfer sabudana payasam into a deep serving dish and garnish with fried cashew nuts, almonds, and raisins just before serving.

Can be eaten hot or cold. 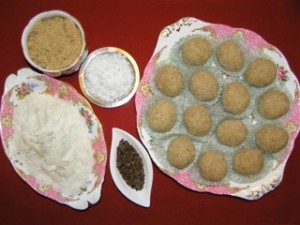 In a dry frying pan fry poha on low heat for three minutes. Let it cool. Blend poha and cardamom seeds together until they become coarse ravva.

Mix all the above ingredients and ghee with hand until you are able to make balls. Taste the mixture for sweetness and make small lime size balls. Makes about 12 balls.

Note: If you are using frozen coconut, spread the coconut on doubled paper towel and microwave it for 30 seconds to remove some moisture.

My mother used to make this laddu during Dasara holidays, when the school children came door-to-door singing Dasara songs.

This is very easy to make. Looks like ravva laddu.

Up Your Glamour Quotient This Party Season

A lavish feast to add more color to Holi