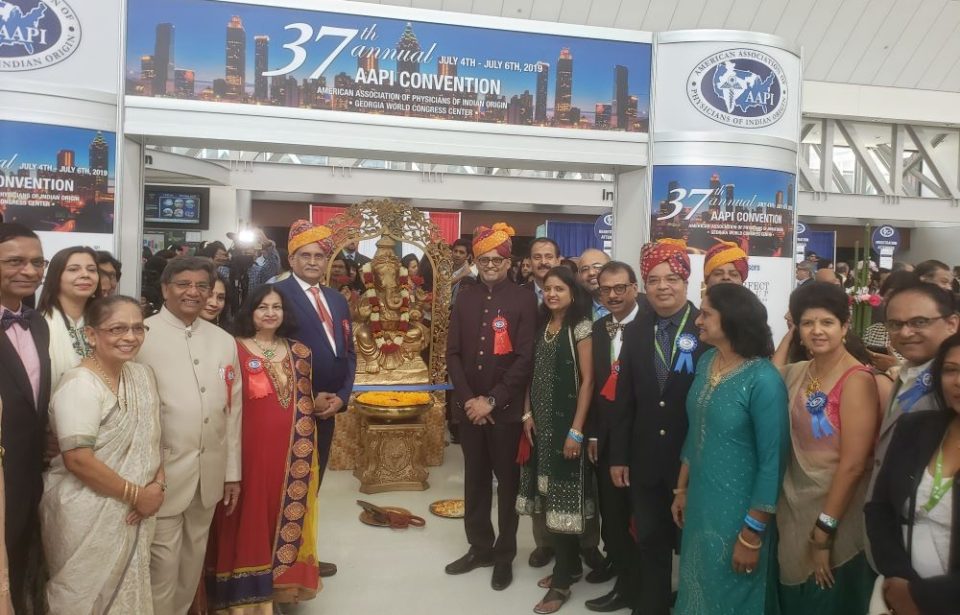 Atlanta, GA, July 12, 2019: The glitzy 5-day annual convention of the American Association of Physicians of Indian Origin (AAPI), held over the 4th of July weekend at the Georgia World Congress Center in Atlanta, attracted close to 2000 Indian-American physicians and healthcare professionals from around the US.

In his welcome address, AAPI President Dr. Naresh Parikh highlighted some of the major accomplishments during his presidency, particularly pointing to the campaign to rid India of TB with the $ 9 Million funds from the USAID. Stating that AAPI’s collaborative efforts with the Government of India and local organizations, several cities have become TB Free and there are several others who are on the way to be free of TB Free in India. Dr. Parikh also highlighted the 10 City musical tour by Sukhvinder Singh which has generated closer bonds between national and local AAPI Chapters, energizing the entire AAPI.

Dr Gangasani added that the delegates returned home with wonderful memories of an informative and entertaining weekend.

“Thanks to my GAPI/ AAPI convention team for doing an amazing job to make this happen. We had the best team members any convention chair can ask for, who stepped up when needed,” he added later, in a Facebook post.

In his keynote address, Sadhguru addressed the problem of mental wellness amongst doctors and the opioid endemic. “Doctors should be symbols of health,” he said. On the contrary, they are committing suicide at a higher rate than other people. The solution is to manage the inner climate like we do the external climate.

He said, stress was the result of people losing context of who they are. “In this infinite cosmos, this earth is miniscule, Atlanta is a super speck. In this, you are a big man. Countless people have come and gone. They have become topsoil. We are here briefly. It feels like a long time if we are miserable. If you are joyful, a day feels like a minute.”

Sadhguru said the human intelligence was working against itself. “If it is working for you, would you choose to be blissful or miserable?” he asked. “You have the choice, but most humans have not exercised their choice.”

Human experiences like stress, agony, bliss, anger, joy have a chemical basis to it. Every doctor needs to evolve himself/herself to a certain level of chemical balance, he added.

On the opioid crisis, Sadhguru said in a hundred years, there would be no difference between medicine and drug dealing.

“Medicine should not be about money or customer development. It should never be commercialized,” he said.

Patrice Harris, MD, President American Medical Association, referred to some the key initiatives AMA is pursuing in recent years. A psychiatrist from Atlanta, serving as the 174th president of AMA, the nation’s premier physician organization, Dr. Harris is the first African-American woman to hold the office.

In her address, Consul General of India in Atlanta, Dr. Swati Vijay Kulkarni, shared her own experiences of working as a physician, prior to becoming a diplomat. She drew to the emergence of India as the center of medical revolution. She praised the many contributions of AAPI members in the United States and back home in India. “You have excelled in your fields of medicine, and thus make significant contributions through hard work, commitment and dedication to your profession and the people you are committed to serve,” she said.

Some of the major themes as part of the CME sessions included: Pursuit of Happiness In Medicine; Burnout Prevention and Wellness in Physicians; Easy Life of a Hospitalist: An Illusion; and, Meditation and Mindfulness.

Golf with Kapil Dev was another major attraction. The cricket star was also a keynote speaker at the convention. In addition, he signed his coffee table book on Sikhism, titled ‘We the Sikhs’.

In addition, there was, for the first time a Youth Public Speaking Competition and the much anticipated and appreciated “AAPI Has Got Talent” where the AAPI members showcased their talents before their colleagues.

The evening g gala on July 4th was dedicated to AAPI Charitable Foundation with Dr. Kapasi leading the campaign for raising funds for AAPI’s numerous noble causes. Dr. Suresh Reddy, incoming President, announced a raffle program where in AAPI gives back money to winning members, with discounted rates for AAPI’s cruise tour in January next year.

The finale of the nite, was the much anticipated, “AAPI Has Got Talent” led by DR. Hemant Dhingra and team, where AAPI members showcased their talents in art, cultural events and music,

A highlight of the convention was the women’s forum on July 5th, with Preity Zinta on the panel.

“I have to work doubly hard in Bollywood. Men had lots of freedom and can have their way. Women had to be confined to line always,” Zinta recalled, in her keynote address

In her welcome remarks, Dr. Asha Parikh, Chairwoman of the Women’s Forum, said, “There is a need for empowerment of women, which means women should be respected at home, at work and in the larger society.”

“The Women’s Forum is where successful and powerful women come and share their life’s dreams, challenges and this empowers and inspire other women. Today’s Forum is about how career changes by women affect t them and the larger society,” Dr Asha said,

Dr. Asha, who is a renowned physician and the First Lady of AAPI, is described to be the power behind Dr. Naresh Parikh, the president of AAPI. Dr.

Priety Zinta,  an actor turned entrepreneur, who owns crickets teams, said, in a developing country like ours, “Women have come to be successful and they have to be working really hard.” She stressed on the need for equal wages. “Respecting women and have them walk shoulder to shoulder with men is the biggest challenge, she said.

Zinta said, education of women is critical and the need of the hour. “In fact, education helps to highlight a woman’s strength and how much she can do to better the life of her children.”

According to her, great emphasis should be given to every woman to empower her financially and socially, educationally, so that she can be independent. “I believe that woman empowerment means financial independence and self-reliance for women.”

“I feel proud that women have achieved so much. But we still have a long way to go,” Zinta said. “Woman has to realize her own potential and strength as an equal member of society. Empowerment is also about women realizing that they should embrace change. Creating awareness is so important, drawing public attention to instances of injustices towards women. “

“My biggest change in life is being married and I love it and that’s the best change that has ever happened in my life,” the young and talented actor told the AAPI delegates.

Aparna Bhattacharya shared with the audience about her own advocacy role she and Raksha, her noble organization working with women are doing in the state of Georgia and other southern states. Describing violence against women as “most shameful,” Bhattacharya stated, the prevalence of violence against women is a global phenomenon. She called for the need for education towards gender sensitization.

“I started as a volunteer and was working with survivors and wanted to help victims of crime in my community,” she recalled. “Breaking the silence of talking about violence and able to talk about it and empower those silently suffering has been the biggest challenge,” she said. “Getting to communicate become aware of working with the Administration to get the resources and help someone get services and break the barriers, some of the initiatives she and RAKSHA are committed to work on. According to her, “The biggest challenge is to keep fighting. Women need to support each other and applaud each other’s victory. If you are not doing it no one is going to do it for yourself,” she told the audience.

Malini Moorthy, another panelist, while acknowledging that there is discrimination in the business world, said, in choosing lead positions and when it comes to payments, men are always preferred over women. “

She called upon “more people to speak out against any type of discrimination.” Stressing the need for equality, she said, “I strongly believe in promoting equality. You are the role models for all of us here. Keep fighting and support one another.”

Archana Kochhar, an Indian fashion designer, who designs have been featured by celebrities like Prabhu Deva, Shriya Saran, Amrita Rao, Nargis Fakhri, Jacqueline Fernandez, Bipasha Basu and Vijender Singh among others, spoke about guiding our children to make career choices in the highly competitive fashion world. If one wants to make fashion his or her  career, one needs to be prepared to have hard work, right attitude, creativity, how you deal with people, especially being humble and open attitude, she said.

Sharing her personal experiences with SMILE, Kochhar said, “My journey with SMILE happened accidentally after seeing an acid victim.” In her efforts to help acid victims and help with their treatment, she had an acid victim walk on a New York Fashion Show, which made headlines across the world media. She was able to raise money to help victims of acid victim. Ever since, it has been a passion for this talented fashion designer to be associated with and support acid victims. “When we share our platform for a noble cause, we can create magic for all,” she said.

Consul General Dr. Kulkarni stressed the need for women’s education. “Education is the keyword, which will empower women socially, emotionally, and economically. Financial independence will give one self respect and she can become a key role model for others.”

Super 30 is anything but super