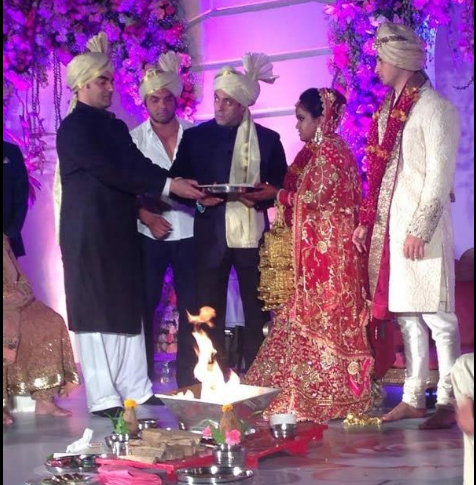 The celebrations, which kicked off with the ‘baraat’ at 4.30 p.m., continued till late in the night at the heritage hotel located in the old city area.

The ‘baraat’ included horses and two bands, one from Delhi and one from Hyderabad.

It was followed by the ‘jaimala’ and ‘phere’. The wedding rituals were performed as per Punjabi Hindu traditions. 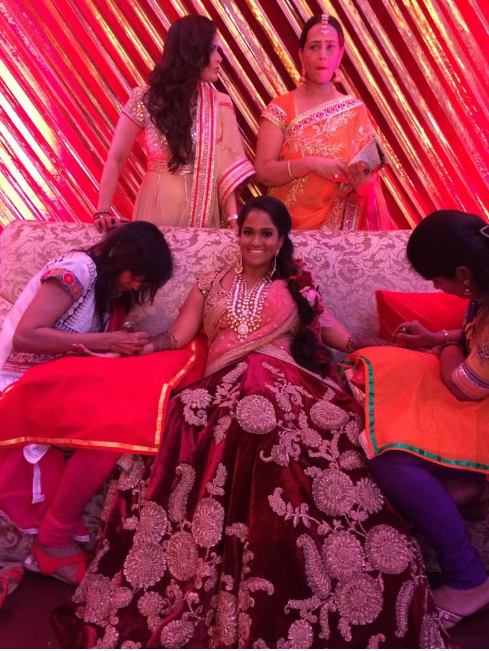 The rituals were followed by a party, where Salman, his step-mother Helen, sister-in-law Malaika Arora Khan performed to some popular numbers. Punjabi singers Mika and Yo Yo Honey Singh livened up the party.

Aamir Khan, Katrina Kaif and Karan Johar were among top stars from Bollywood who attended the marriage. Stars from Tollywood and businessmen were among the 250 guests invited for the wedding.

It was not clear as to which other leading stars attended the wedding as a thick security blanket was thrown around the hotel and the media was barred from the venue.

While police were managing the outer security ring, the actor’s personal guards and others were keeping a tight vigil inside the hotel.

Some pictures of the bride, bridegroom, Salman and other family members were posted on social networking websites.

Salman booked the entire 60-room hotel for Tuesday and Wednesday. The celebrations will conclude Wednesday with a farewell lunch.

Seven folk artists from Rajasthan and many more from Mumbai were specially flown in for Tuesday night’s party.

Hundreds of Salman fans, including young girls, gathered outside the hotel to catch a glimpse of the stars.

The fans, including some from Mumbai, mobbed the vehicles entering the hotel.

The menu for the party includes Deccani cuisine, especially Biryani and Haleem and double ka meetha.

Falaknuma is one of the most beautiful palaces of the Nizam, the ruler of erstwhile Hyderabad State.

The palace, which the Taj Group converted into a luxury hotel and opened four years ago, has 60 lavish rooms, decorated halls and a 101-seat dining hall, said to be the biggest in the world.

Located five km from Charminar, Falaknuma – or ‘mirror of the sky’ in Urdu – is a scorpion-shaped, all-marble palace which was once the residence of Mir Mahboob Ali Khan (1869-1911), the sixth Nizam.

It was Nawab Vaqar-ul-Umra, the Nizam’s prime minister, who built the palace in 1893. Impressed by its magnificence, the Nizam bought it for himself.

A couple of suites including the one used by the Nizam are the most expensive. The hotel charges over Rs.5 lakh a night for the Nizam suite.