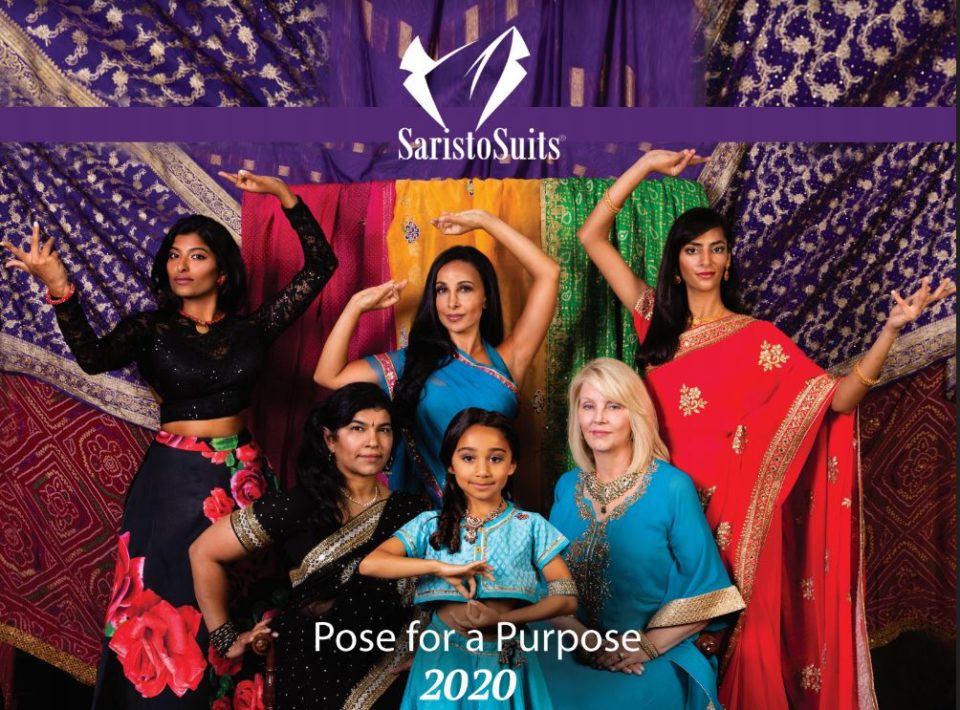 Atlanta, GA, December 6, 2019: They tread the untrodden trail, paving their own paths in pursuit of their passions. Their fields of work are all unique, be it medicine, research, entrepreneurship, executive positions, journalism, sports, law, music, education, and humanity, even.

Patti Tripathi, a trailblazer in her own right, picks these incredible South Asian women of substance each year to showcase their success stories in her signature calendar, Saris to Suits. The Pose for a Purpose campaign calendar seeks to raise funds for various women-oriented initiatives in the US and India, such as rehabilitative care for victims of trafficking, sex slavery, campaigns against domestic violence and gender inequality.

Take a bow, women of the 2020 edition, for inspiring, invigorating, and illuminating the world with your drive and determination.

The face of January, Seema Verma, one of the key Indian-origin members in the Trump administration, serves as the current administrator of the Centers for Medicare and Medicaid services in Washington DC. She holds a master’s degree in Public Health from Johns Hopkins University. Seema Verma, a mother of two, resides with her kids and husband in Indiana.

Face of February, Dr. Nina Radcliff, a network news and syndicated medical advisor bears a royal lineage, as niece of the king of Udaipur, along with being a board-certified anesthesiologist in New Jersey. Dr. Nina believes in changing lives by means of health and wellness communication through her column, Dr. Nina’s What You Need To Know. Dr. Nina Radcliff is a member of the New Jersey State Senate Health Committee.

Face of March, Atlanta based Priya Yadav, at 16, along with her TiE Young Entrepreneurs, patented the use of placental stem cells for the regeneration of skin in burned victims. Priya’s inspirational odyssey began early on when she was adopted as a 2-month-old baby from Pune. Priya is an accomplished Bharatanatyam dancer and a sophomore at Emory University.

The Month of April features Atlanta’s most endearing duo, Frances M. West and Veena Rao, who share a tender mother-daughter relationship and a soulful connection beyond borders. Veena Rao is the founder and editor-in-chief of NRI Pulse. She is in the Limca Book of Records as the first Indian woman to edit and publish a newspaper outside India. Having won the SparkPress STEP contest for her debut novel The Purple Lotus which will be released this year, Rao will soon be a published author.  97-year old Frances spent 20 years in Nigeria where she founded Ogmobosho School for the blind.  An indomitable spirit, she realized her lifelong dream of visiting India at age 94, with Veena by her side.

Patti pays a moving tribute to her mother, Poonam Tripathi, for the month of May in honor of Mother’s Day. Having lost her mother very early on at age 56 to a rare lung disease, Patti finds solace in the fact that her fiercely protective mother of three lived long enough to see her only daughter accomplish her dream of becoming a pioneer news anchor.

June features Dr. Naina Sachdev, Medical Director at her NainaMD anti-aging and regenerative clinic in California. An alumnus of Chicago Medical School and expert in her field of work, her client base is spread across California to Japan, Dubai, the Netherlands and the Philippine. Her skincare line based on patented age reversal complex and ingestible products.

Face of July, Atlanta based Movina Nagarajan, is an Indian American singer, songwriter and performer. Having learned Carnatic music, Bharatanatyam and majored in Western Classical music, Movina’s music seamlessly meshes her influences. She released her debut single Call Me Baddie in early 2019.

August features Marsha Nicholas-Nigri, an elementary education teacher for about 25 years originally from the twin islands of Trinidad and Tobago. She and her husband Achille Nigri are owners of Café Amici, a popular Italian restaurant in downtown Sarasota, Florida, frequented by celebrities and vacationers. Her heritage can be traced to the wave of indentured laborers who were brought to the Caribbean islands for farming in the 1800s.

Posing for September is Raji Venkat, who embraces arts at its cultural best, being a Bharatanatyam exponent, an accomplished opera singer and included among the top ten in the National Association of Teachers Singing (NATS). Currently at New England Conservatory in Boston, Raji has performed worldwide including China and Croatia.

October model Payal Patel is an award-winning, multilingual communication professional in Chicago, leading PR efforts and serving as the primary spokesperson for Navy Pier in the Midwest. A leading advocate for girls’ education, Payal Patel serves as an ambassador of Room to Read, Chicago Chapter which raises funds for girls’ literacy programs worldwide. She supports Apna Ghar, which works with immigrant communities to end gender violence.

Face of November, Natasha Subhash, has been the first ranked player in the country in Girls 12, Girls 14, and Girls 16. She was ranked as high as 26 in the Junior International Tennis Ranking. She has played all four Junior Grand Slam tennis tournaments and won her first Professional Singles title in 2019. Natasha is a freshman on a full tennis scholarship at the University of Virginia. Natasha is inspired by Sania Mirza and considers Mirza her role model.

Gracing December is Abha Singh, a Bombay High Court advocate, a social activist and an outspoken feminist. A former civil servant, she willfully chose to fight for women’s right to justice and gender equality, sacrificing her cozy bureaucratic career. A force to reckon with, Abha Singh has initiated several Public Interest litigations.  Abha Singh was invited as keynote speaker at Columbia University, NY, where she delivered a riveting speech on the impact of the #MeToo Movement on corporate culture in India. Her book Stree – Dasha aur Disha promotes women empowerment by highlighting real-time cases and their legal recourse and aims to educate women of their rights.

Atlanta based board certified obstetrician-gynecologist and an EMMY award winning medical journalist Dr. Sujatha Reddy completes the compilation featuring in January 2021. She is a medical correspondent for Atlanta’s NBC affiliate WXIA and a medical columnist on CNN. Dr. Sujatha Reddy serves on the Board of Directors of the Atlanta Women’s Foundation.

Having nurtured a dream to anchor news since an early age, Patti Tripathi’s industrious efforts and determination bore fruition when she blazed the trail becoming the first woman of Indian origin to anchor network news. She made her mark in the 2000s anchoring now defunct CNN Radio and was a regular face on CNN Headline News.

Since its inception in 2012, Patti Tripathi’s Saris to Suits has strived to break down barriers that constrain advancement of immigrant women, illuminating light on factors that can advance women’s empowerment, cultural awareness, and social justice.

At crossroads, these women chose the path less traveled. And it has made all the difference.

Saris to Suits calendars can be purchased online at: https://www.saristosuits.org/