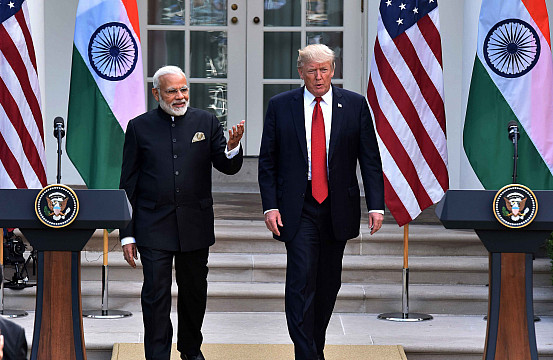 New York, July 2 (IANS) The US Senate has suggested expanding defense cooperation with major defense partner India to the Gulf region by holding joint exercises there, similar to the ones India, the US as well as its allies have held in the Pacific and Indian Ocean regions.

This was one of the items in the six-agenda proposed in the $750-billion defence budget passed by the Senate on Thursday to “strengthen and enhance its major defence partnership with India”.

It said Washington should work towards the mutual security objective of “conducting additional combined exercises with India in the Persian Gulf, Indian Ocean, and western Pacific regions”.

With tensions rising in the Gulf region following the attacks on four ships in recent weeks and the shooting down of a US surveillance drone by Iran, India sent two navy ships to the Gulf region to protect its shipping interests.

US President Donald Trump has been urging allies and other countries to step up and provide security for shipping in the region. At his meeting with Trump on Thursday, Prime Minister Narendra Modi told him about India deploying its naval ships in the Gulf.

The Indian and US navies, sometimes along with those of Japan, Australia and the Philippines have conducted joint exercises in the Indo-Pacific region.

But to hold joint exercises in the Gulf with the US, India would have to navigate the region’s geopolitical complexities and consider the conflicting interests there, unlike in the Indo-Pacific where the motivations are clear-cut with China as the focus.

Formally known as the National Defense Authorization Act, the budget has to be passed by the House of Representatives which is scheduled to consider it this month.

The defence budget passed by the Senate said: “It is the sense of the Senate that the US should strengthen and enhance its major defence partnership with India” and listed six specific actions it wanted the Trump administration to take.

It wanted the administration to strengthen and expand the scope of the designation of India as a major defence partner, a status given to India in 2016 by former President Barack Obama and built upon by Trump.

The other proposals by the Senate included asking Washington to explore “additional steps to implement the major defence partner designation to better facilitate interoperability, information sharing and appropriate technology transfers” and to undertake “strategic initiatives to help develop the defence capabilities of India”.

It also urged “increasing the frequency and scope of exchanges” between senior civilian officials and military officers “to support the development and implementation of the major defence partnership”.

While the US is pursuing negotiations with the Taliban for a peace accord, the Senate suggested taking “cooperative efforts to promote stability and security in Afghanistan”.

India has expressed unease with the pace of US-Taliban negotiations even as the terror group has increased attacks in Afghanistan and urged Washington to be cautious.

In a recognition of the shared democratic values and commitment to free navigation, another suggestion in the budget document is to increase engagement with India in multilateral frameworks “to promote regional security and defend shared values and common interests in the rules-based order”.

It said the quadrilateral dialogue among the US, India, Japan, and Australia should be enhanced.

The budget proposals relating to India were introduced by the Senate India Caucus Co-Chairs, Senators John Cornyn and Mark Warner.

An amendment along the lines of the Senate provisions for India has been proposed for the House version of the defence budget by Representative Brad Sherman and others.