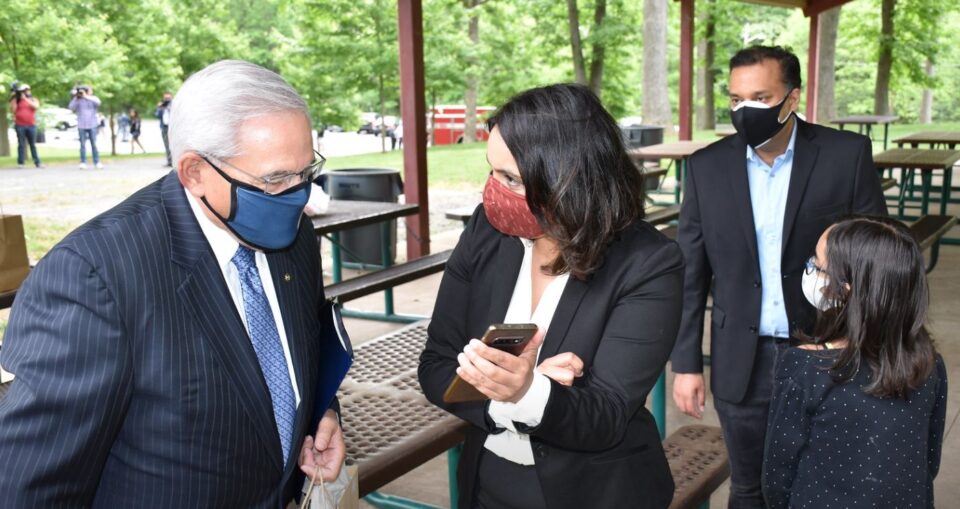 Scotch Plain, NJ, May 28, 2021: U.S. Senator Bob Menendez (D-N.J.), Chairman of the Senate Foreign Relations Committee earlier this week celebrated the safe return of a tech professional on H1-B visa status within weeks of him being told he would be trapped in India and unable to see his wife and daughters until 2022 due to tightening COVID-19 restrictions.

Sen. Menendez and his staff played an instrumental role in reuniting Ashu Mahajan with his family and are actively assisting other New Jersey constituents in similar situations as the coronavirus outbreak worsens in India, said a press release issued by his office.

“Having the family separated for so long would not only be a tremendous hardship—it would jeopardize the very job that makes Ashu’s H1-B status and his family’s life here in America possible,” said Sen. Menendez.  “I’m incredibly proud of my staff in New Jersey and in Washington with the Senate Foreign Relations Committee for working together to bring Mr. Mahajan home.  They reached out to the State Department.  They made clear all that was at stake in this case, and they successfully secured an expedited appointment at our embassy in New Delhi so that he could get that passport stamp and board a plane back to America.”

Mahajan traveled to India on April 17 to see his ailing father just days before his death on April 21 from COVID-19.  But before the software solutions architect could return home to New Jersey, new pandemic restrictions went into effect forcing the closures of American embassies and consulates located in India.  As a highly-skilled immigrant worker with an H1-B visa, Mahajan is required to have his passport reviewed and stamped at an American embassy or consulate before traveling to the U.S., but that the earliest he was told he could get an appointment was in Feb. 2022.

Mahajan, his wife, Neha, and two daughters, 15-year-old Sanaa and nine-year-old Aishi, joined Sen. Menendez at a press conference near their Scotch Plains, N.J., home to announce his safe return and thank the Senator and his staff for all their help.

“When I was leaving for India, I knew my dad was sick.  I was still debating whether I should go or not.  If I go, I knew I would have visa issues, but still, I took that decision because that was my dad,”said Ashu Mahajan.  “While he was in the hospital, I was not even thinking about visa issues.  After that, it hit me that I would be separated from my family for more than a year.  At that time, I told Senator Menendez I became so pessimistic for everything, whether this is going to happen or not.  But thanks to Senator Menendez and his team they have been reassuring us all this while and showing us directions on how to go about this.”

“We really want to thank Senator Menendez and his staff.  If it were not for his support and his office’s support, I don’t know when I would see Ashu,” said Neha Mahajan.  “When the girls would see him. Every night we spent on two different continents, my girls would ask me, ‘When is daddy coming home?’  And I really did not have an answer for them.  Yesterday, was probably the first night when I saw him and I was able to sleep in peace because during a pandemic we are all going through a lot.  And immigration related matters are the last ones that you need to impact and keep us separated.”

Ashu Mahajan was finally reunited with his family after his plane landed Sunday at Newark Liberty International Airport.  He had his passport properly processed Thursday during the expedited appointment Sen. Menendez helped arrange.  In accordance with Centers for Disease Control and Prevention (CDC) travel guidelines, Mahajan, who is fully vaccinated for COVID-19, then received a negative COVID test result before boarding his flight.

After a reporter from WABC-TV first alerted Sen. Menendez’s office to Mahajan’s story, the Senator’s staff was able to connect with his wife, Neha, and begin working on the family’s behalf to expedite Ashu’s safe return home.

The rise in COVID-19 cases and deaths in India prompted the tightening restrictions.

New Jersey is home to the largest Indian American population in the United States at nearly 400,000, according to U.S. Census data.  Sen. Menendez’s office is actively working to help several New Jersey families with loved ones trapped in India.

The Mahajans have been caught for nearly a decade in the immigration backlog after they legally immigrated to the U.S. through the H1-B visa program and applied and qualified in 2012 for Green Cards.  Their youngest daughter, Aisha, is an American citizen, which was a factor that the U.S. State Dept. considered in expediting her father’s case.  “Ironically, had the family received their Green Cards and permanent resident status in a timely manner, Ashu Majahan never would have faced his predicament because he would not have been required to get his passport stamped before traveling home to New Jersey,” said the statement.