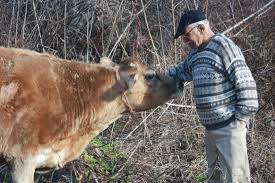 New York, March 23 (IANS) The severed head of cow has been placed at a Hindu cow sanctuary in Pennsylvania and the state police are investigating the crime as a case of “ethnic intimidation.”

The cow’s head was dumped over the weekend at the Lakshmi Cow Sanctuary in Monroe County, according to media reports.

State Trooper Carrie A. Gula, who was quoted by the newspaper, said explaining the intimidation description, “The victim’s religion is Hinduism. In this religion, the cow is (a) symbol of life and may never be killed.”

None of the 20 cows at the sanctuary were hurt, local TV station WNEP reported on its web site. The severed head was left where Sankar Sastri, who runs the sanctuary could find it, “but he’s not letting this taint what the sanctuary is all about,” reporter Jim Hamill said. “Now the sanctuary has a chance to educate folks about Hindu beliefs in spite of a disturbing deed.”

Sastri told the station, “I hope this doesn’t magnify anymore. I don’t want to take it to the next side. I hope just a prank. They probably didn’t realize. People are unaware of what we’re about.” Sastri would use the incident to inform the local people about Hinduism, Hamill said.

The Express Times reported that the cow sanctuary was founded about 20 years ago by Sastri, a retired professor and dean at the New York City College of Technology, and relocated to the area around Jackson Township from another location in the state only about about a month ago.

He told the newspaper’s web site, lehighvalleylive.com, that finding the cow’s head was like the scene from “The Godfather” movie where a severed horse head is left on a man’s bed as a warning from the mob boss. But “they didn’t leave it in my bed.” Sastri said.

Rajan Zed, the president of the Nevada-based Universal Society of Hinduism, said that “Hindus are highly concerned” over the incident and asked Pennsylvania Governor Tom Wolf and Monroe County Chairperson John R. Moyer to reassure the community.

“It was shocking for the hard-working, harmonious and peaceful US Hindu community numbering about three million, who had made lot of contributions to the nation and society, to receive such signals of hatred and intimidation,” he said in a statement.

US contractor to pay $3.1 million penalty for illegal outsourcing to India