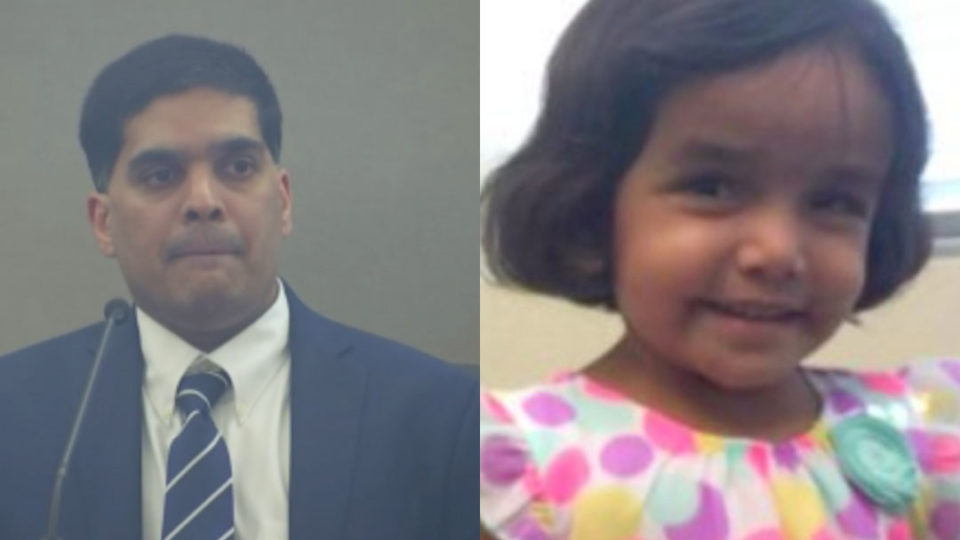 Washington, June 27 (IANS) Wesley Mathews, the Indian-American adoptive father accused of killing his three-year-old daughter Sherin Mathews and hiding her body in a ditch in the US state of Texas in 2017, has been sentenced to life in jail after pleading guilty to a lesser charge.

Wesley Mathews, 39, on Monday pleaded guilty to a lesser charge of injury to a child by omission in the Indian girl’s death. Authorities had originally charged him for capital murder.

He took the witness stand on Tuesday afternoon and Wednesday morning in Dallas and answered questions about the decisions he made on the night of the girl’s death, CBS DFW reported.

The 12-member jury deliberated on Wednesday for about three hours before coming to a unanimous decision to give Wesley Mathews a sentence of life in the death of his adopted daughter.

On October 22, 208, Sherin Mathews’ body was found in a culvert in Richardson under a road about one kilometre from her home in suburban Dallas.

On the witness stand during the sentencing trial, he said he panicked after his daughter’s “accidental death” and put her in a culvert so she would be “near the home”.

“I tried to gently shake Sherin so she would be out of that spell but nothing was working and in a matter – pretty soon her head started going different directions and her head came to a still,” Wesley Mathews said in his testimony.

“I truly am sorry. I don’t have words to express how sorry I am to these fine officers, these fine people who were full of love and concern for my baby Sherin and they devoted a lot of time and effort and I could have easily stopped that.”

She said testimony and medical records show that it’s “medically impossible for a child who is three years old to stand up and choke to death” as Mathews claimed.

“It means he’s still a liar. It means he killed that little girl. And when he killed her, he panicked. “He covered his crime. He got away with that,” Thomas said.

The girl’s foster father did not even tell investigators where her body was. When her body was found, it was so badly decomposed that the medical examiner couldn’t determine an exact cause of death, the US media reported.

The defence attorney called the sentence a “cruel and unusual punishment”.

Wesley Mathews’ wife Sini was also charged with child abandonment but her case was dismissed earlier this year due to lack of evidence.

The couple’s biological daughter was removed from their custody shortly after the toddler was reported missing. She was initially taken into foster care, but is now said to be staying with relatives.