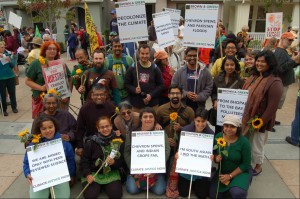 San Francisco, California:  Over two dozen members of Brown and Green: South Asians for Climate Justice marched through the streets of Richmond, California recently to the gates of the Chevron refinery, demanding that Chevron stop refining dirty Canadian tar sands oil, and reduce its impact on the climate—”a factor in disasters like the 2010 Pakistan flood and the 2013 floods in Uttarakhand, India.”  The group was working with Summer Heat, a national project to hold the fossil fuel industry accountable for its actions.Explained sustainable designer Barnali Ghosh, “major climate polluters like Chevron are responsible for sending the planet past a CO2 concentration of 400 ppm, the highest levels found on earth in millions of years. The deadly effects of climate change are becoming visible in the form of flooding in India and Pakistan, cyclones in Bangladesh, extreme heat in Sri Lanka, and more.”

While most participants held a safe and legal rally outside the refinery, others, including labor organizer Sanjay Garla, were arrested for symbolically planting seeds inside the Chevron property. Garla, who chose to risk arrest due to moral obligation in the tradition of Mahatma Gandhi, explained that “the effects of climate change are not felt equally everywhere, but in our own countries, in places like India and Bangladesh, people are living with climate impacts every day. It’s important for South Asians to take action, no matter where we live in the world.”

Student Madhvi Pathak said “We’re fighting for our future. Chevron CEO John Watson may not be alive in 2050, but I will. What kind of world will we inherit?” Added tech entrepreneur Anirvan Chatterjee, “in 1947 and 1971, millions of South Asians were forced to trudge across the subcontinent, fleeing for their lives. If we organize today, we can help prevent a new climate refugee crisis on the scale of Partition.”

Delhi native Devika Ghai was worried about her grandmother, whose community had been affected by the recent Uttarakhand floods in India. Ghai carried a sign saying “we are armed only with peer-reviewed science.” New research by Stanford scientists published in the latest issue of Science indicates that the earth might become 9 degrees F warmer by the year 2100—but the rise could be limited to 4 degrees F if emissions are cut significantly.

Saturday’s event was scheduled to mark the anniversary of the August 6, 2012 explosion and fire at the Richmond Chevron refinery that generated a huge plume of black smoke and sent 15,000 people to hospitals complaining of breathing problems. The 2012 incident had worried Ghai and many others, reminding them of the deadly gas release in Bhopal, India.