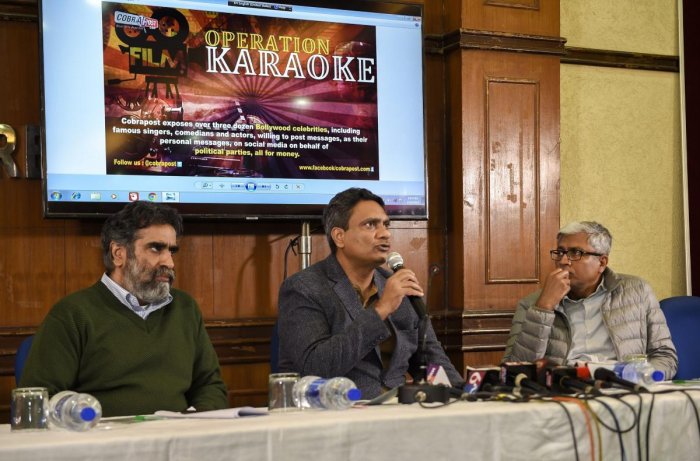 New Delhi, Feb 19 (IANS) More than 30 Indian film and TV industry actors/artistes agreed to spread the propaganda of political parties through their social media accounts for money, which they asked to be paid in cash, in other words in untaxed black money, it has been revealed in a sting operation.

Actors Vivek Oberoi, Shakti Kapoor, Jackie Shroff, Amisha Patel, Mahima Chaudhary and Sonu Sood, and singers Kailash Kher, Abhijeet and Mika were some of those caught on camera accepting the deal for toeing the agenda of a political party or endorsing it for money.

The celebrities were caught on camera accepting the cash-for-tweet offer during a sting operation conducted by media portal Cobra Post over a period of 3-4 months last year.

Cobra Post on Tuesday released the sting operation in a video documentary titled ‘Operation Karaoke’, in which actors, dancers, singers and models were caught accepting the offer for promoting political parties through hidden cameras.

The reporters, acting as agents working on behalf of the Congress, the BJP or the Aam Aadmi Party, made an offer to pay 10-20 per cent of the decided sum in cheque or bank transfer, and the rest through cash, which the celebrities accepted.

Vidya Balan, Raza Murad, Arshad Warsi and TV actor Saumya Tandon were the only ones who refused the offer.

Celebrities were offered Rs 2 lakh to Rs 20 lakh per message according to their brand value. Some celebrities even asked the reporters-cum-agents for up to Rs 20 crore citing the sway they hold on the Twitter sphere.

These celebs agreed to promote the party — any which was proposed to them — to create a favourable environment before the 2019 general elections.

They swore to keep the entire exercise a secret and the agenda hidden.

“This way, you (celebrities) are manufacturing an opinion through social media. If you reveal that you have taken money for the promotion that you are doing, it would be fine… If we go by the trend, these people may not shy away from propagating a communal agenda either,” said journalist and former Aam Aadmi Party member Ashutosh during the press conference.

He compared the celebrities who accepted the deal to “trolls” and called trolling a “paid syndicate mafia”.

Hartosh Singh Bal, political editor of Caravan magazine, also addressed the reporters and termed the incident a telling foreboding of the “dangerous times” ahead.

“We are going to see the consequences of this in the coming elections,” he said.

The impact most of these celebrities can have through their handles in denting or boosting a party’s image can be gauged from the number of followers almost each of them has on Twitter.

Model and actress Sunny Leone, though one of those agreeing to promote the BJP on camera, issued a disclaimer on Twitter hours after the press conference, rubbishing the news of promoting a political party.

“Hi, this is to inform you that I am not campaigning for any political parties, unlike the news that’s circulated talking about me doing so… If I choose to promote anything in political life I would choose things I only believe in,” she tweeted. Leone alone has 3.95 million followers on Twitter.

Pulwama terrorist attack condemned on the floor of Georgia Senate