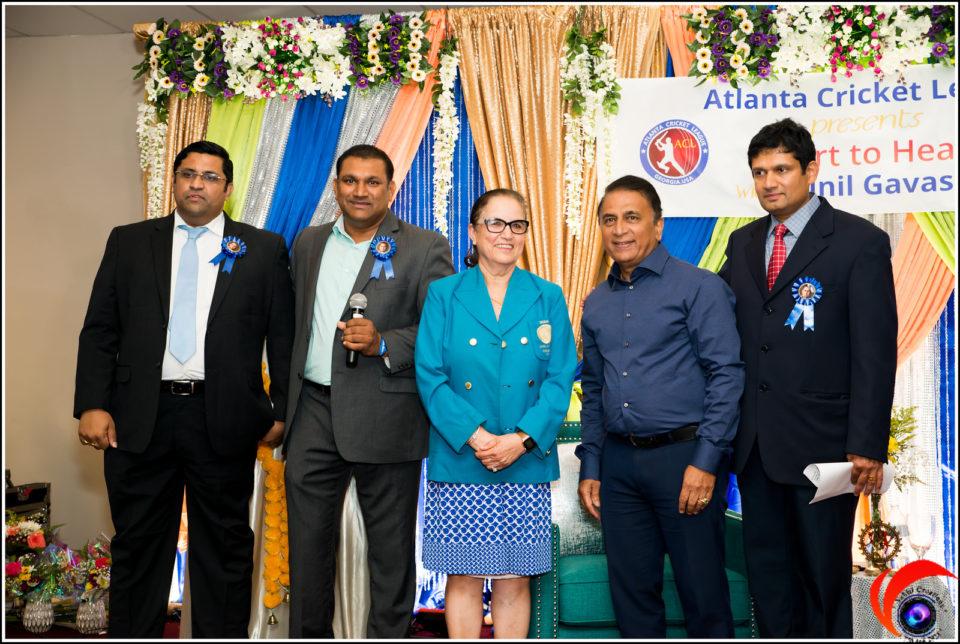 Atlanta, GA, September 9, 2019: “You have to play as much as you can. There is nothing like experience, nothing like match-practice, nothing like learning every day and having all-rounders. If you observe any matches India has won over the years, it is because they had all-rounders.” This was the legendary advice from cricket icon Sunil Gavaskar for the Atlanta team to qualify for T20 matches, during his recent visit to the city.

Well over 500 cricket enthusiasts flocked to meet, greet and listen to the legendary batsman at the Heart to Heart event hosted by the Heart to Heart (H2H) foundation and Atlanta Cricket League at the Ashiana Banquet Hall in Global Mall on August 18, 2019.

Gavaskar is utilizing time between the limited overs and the Test match series of the West Indies tour to visit the US to create awareness about H2H Foundation.

Gavaskar, who was the heart of his team back in the 70s and 80s, is now batting to save the hearts of children through the Heart to Heart Foundation, a non-profit organization dedicated to saving lives of young kids born with congenital heart defects by providing free pediatric cardiac surgeries, in collaboration with the Sri Sathya Sai Sanjeevani Hospitals.

According to H2H, in just two stops, New Jersey and Georgia, Gavaskar raised funds for the surgeries of 230 children. The cost of each surgery is $1200. Gavaskar also met President Donald Trump at the Trump Bedminster Golf Course in New York during this visit.

The batting icon, through the “Freedom from CHD” initiative, is on a multi-city tour titled “Batting-for-Life”, across the US including stops in states of New Jersey, Georgia, California, Seattle, Kentucky, Indiana, ending in Chicago, Illinois, spreading awareness and participation for free heart surgeries in India. Along with a conversation with the legend, the event also involves Gavaskar signing memorabilia bats for attendees sponsoring heart surgeries.

“India remains the world capital for Congenital Heart Disease (CHD), with 300,000 children born with CHD each year. Without medical/surgical care, thousands of kids with CHD die before their 1st birthday. There are over 36,000 children waiting for a free heart surgery in the next two years. We are targeting to support 5,000 free heart surgeries this year, increasing each year thereafter,” said Trustee & Director of H2H Foundation, Arvind Thiagarajan.

Thiagarajan also elaborated their Independence Day pledge to have India free of CHD with a “Five Point Focus” including free heart surgeries, screening, prevention, research and spreading awareness. The screening, Thiagarajan said would be made easier through an intelligent stethoscope with integrated EKG, developed by his company HD Medical. “No wires or gel is required. Even a social worker can detect any murmur or irregularities of the heart if an orange patch shows up. These intelligent stethoscopes worth 1 crore will be handed out for free of cost from HD Medical,” he added.

In a candid and earnest conversation with Thiagarajan, Gavaskar hailed Kapil Dev as the best Indian player because of his ability to handle the bat, the ball and the fielding. Acknowledging the burden of expectations, the icon said his approach was to downplay his own role. Elaborating that when a batsman hits a century, it is only possible because of the batsman at the other end, encouraging his team and spreading the success around was the best way to stay grounded.

So how did the star deal with his leanest phase? “I just believed in myself. I worked harder, I practiced much harder and I practiced with a greater sense of purpose. I tightened my technique, even asked different people why I was not doing well,” said Gavaskar, adding that his father had provided one of the best advices when his batting had taken a hit, owing to a hurt finger.