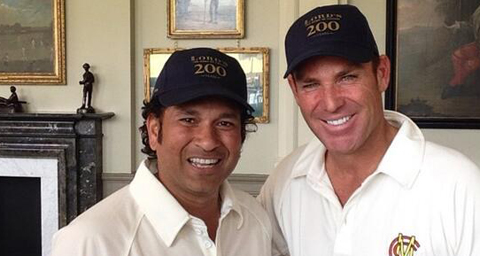 According to Warne, the ambitious concept is close to becoming a reality with interest also being shown by the city of Las Vegas about hosting one of the legendary pair’s ‘All Star’ matches.

Warne and Tendulkar have targeted the US – which boasts a sizeable sub-continental ex-pat population – as the first in a number of traditionally non-cricket regions they are looking to introduce their roadshow, with Hong Kong and Singapore also on the hit-list.

“We’re going to have Bollywood theme nights and it’s all shaping up pretty well. We’re looking at ourselves as a Formula One team. Myself and Sachin had an idea – why not take cricket to America and be the Harlem Globetrotters, go around and do free exhibitions at schools, help grow the game of cricket?

“The Mayor of Las Vegas (Carolyn Goodman) came up to me while I was playing in the World Series of Poker and asked me would we put a game on there and that they’d love to build a stadium and have a proper game in Las Vegas. I know the MGM Grand want some stuff to be put on too,” Warne added.

Warne and Tendulkar’s enterprise – separate from the Dubai-based T20 Masters tournament that was launched earlier this month and is scheduled to be played next February – would see the legends of the game compete in three Twenty20 exhibition matches in November.

“We’ve signed around 28 players who have all said, ‘If you and Sachin are doing it, we’d like to do it as well,” Warne said.

“We’ve got all the players you’d want to see from the past 20 years. Part of the all-stars idea is we go around and the people who haven’t had the opportunity to see these guys play over the years because they’re based in the States can come.”

“We want to go there live, promote the game of cricket for children, put on some events and have some fun playing cricket,” Warne concluded.

Warne insisted the concept has the full support of the International Cricket Coucil (ICC) while discussions were ongoing with the American Cricket Association to pave the way for its involvement also.