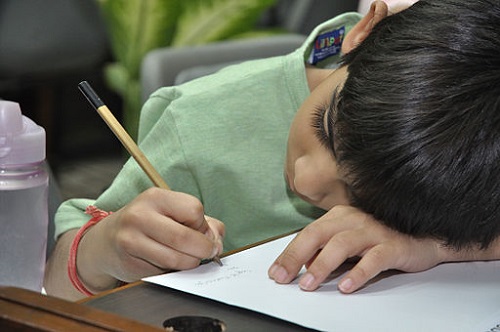 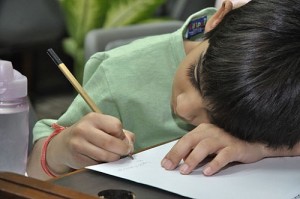 KURINJI SEY speaks to community members who are making an organized effort at teaching children their native tongue.

Atlanta, GA: Languages are assets. Learning multiple languages is easier for children than it is for adults, but children who are exposed to languages other then their mother tongue in a foreign country often miss out on learning their native language. Raising a bilingual child is common in most parts of the world, especially in  India, where its more common for children to be raised in a bilingual family or community. Here are some discussions on how to teach children their mother tongue in a nation were chances of practicing it are limited.

Ravi Palaniappan, former president of Greater Atlanta Tamil Sangam, says, “Research done in Germany and France shows that learning more than one language expands children’s creativity, children do much better in their regular school, score high on standardized tests, they are better problem-solvers because of a huge boost in cognitive development and with regard to social aspect children become more open to diversity.” Palaniappan, who is also the principal in one of the three GATS Tamil schools, proudly says that, “The State of Georgia is the first in the USA to accredit Tamil language in the middle school and high school system. Which means children studying in any public school in GA can choose Tamil instead of Spanish or Germany for their language credit.” This recognition in Georgia was achieved through implementing the well developed curriculum by California Tamil Academy (CTA).

In the past two years, after implementing CTA’s curriculum, both children and parents are highly motivated in learning Tamil in all their three schools the language course demands exams and grades at regular intervals, and maintain a high standard in all areas of language learning such as speaking, reading and writing. Palaniappan adds, “Students even learn grammar at high school level.”

Palaniappan’s observation is that all parents love to teach Tamil to their children. Before the structured program, parents felt that they are taking efforts, but the children were learning less and after the CTA curriculum implementation nearly 300 students enrolled and more parents are volunteering. He said, “Grandparents visiting from the homeland are amazed at seeing children learning Tamil and contribute to the school through conducting language based competitions.” In their schools, children enjoy learning Tamil through demo projects, skits and seminars conducted by leadership development personnel.

Sandhya Bhagat – With a Masters degree in Hindi from Delhi University and another degree to teach children, Bhagat conducts Hindi classes at her home through a theater group. The purpose of the theater group is to support Hindi and the culture. Students learning Hindi in her school learn the language and gain confidence in speaking it on stage. She starts by saying, “Respect every language, especially the mother tongue.” Indian lineage children born in the US are lucky to learn Hindi because of the recent opportunities. To the kids she says,” Hindi can be a secret language in the US, if you want to convey any message discretely or if you have dreams of entering Bollywood”. Her counsel to parents is “to make a decision early in your children’s life to teach them their mother tongue and culture. It is not the children who are confused but you the parents. Speak Hindi to a child from its birth and expect a reply from the child in Hindi, get over the mental block that any other language is superior then our mother tongue. The other advantage of learning Hindi in early childhood is that the pronunciation and accent comes easy with fluency rather then in adolescence or in adulthood”. Bhagat affirms that the parents are guilty of robbing the emotional connection between the grandparents and their grandchildren if a language gap arises between them.

She recalls her grownup sons questioning her about not teaching them Punjabi, their father’s language. So she says, if the parents are with various language backgrounds, each parents should speak to them in their language and children are so smart they will pick it up for sure.

As a piece of information, Bhagat has the prospectus of the online Hindi diploma course to foreign students offered by Central Hindi Institute at R.K. Puram, Delhi and would gladly guide anyone interested in the course.

Vanishree Rao and her team of volunteers conduct Kannada classes in Marietta Library. Rao and her team came up with their own curriculum with the outlined guidance from county school Spanish teachers. Also, a grandmother who is a retired Kannada and science teacher in India, came up with lessen plan purely in Kannada, which was more than teaching numbers or colors, which showed Rao and her team the next step in teaching Kannada. She encourages children to use the alphabetical cart with the notion that, ”Almost all Indian languages are easy to read once you learn the alphabets because there is no different phonic sounds or silent letters or any secret to the language. This aspect of Kannada exits children to participate more in Kannada school. Once they start to read, children feel that they have achieved and are gratified at large”. The main motivation for children to attend Kannada class is to be with their friends and the class atmosphere is so lively with language jokes which arises when learning a new language.

She also pointed out that, “Children coming from a home where no one know to speak Kannada can pick up the language. An example, a third generation child in US, reads grocery labels in Kannada to her father who could not”. So Rao says, “There is hope even if a generation missed to learn the next can catch on to learn a mother tongue”.

Apart from positive social benefits, learning a second language and speaking it regularly can improve your cognitive skills and delay the onset of dementia. According to researchers at York University in Toronto who compared bilingual individuals with people who spoke only one language, found that bilinguals has the advantage over monolinguals. Their study suggests that bilingual speakers hold Alzheimer’s disease at bay for an extra four years on average compared with monoglots. School-level language skills that you use on holiday may even improve brain function to some extent. In addition, bilingual children who use their second language regularly are better at prioritising tasks and multitasking compared with monolingual children.
Her advice to parent is to keep talking in their mother tongue, tell traditional legends only in their native tongue and play traditional games, and listen to Kannada music, such activities will make children learn any language without being aware of it, she says.

Meenakshi Iyer whose native language is Tamil chose to send her sons to Hindi classes because of the non-availability of Tamil classes near her home back in 1997 and also in the belief that the opportunity to learn a language should not be missed. Iyer, who herself speaks more than five languages, volunteered to teach Hindi at Bal Vihar for 13 years. She recalls that her methods of teaching were based on her skills as a preschool Montessori teacher. Her opinion about children being brought up in a different culture than their parents is that, “Children will experience peer pressure and cultural dilemma in their adolescence but if the parents choose to teach children to learn the mother tongue they should teach them at a very young age so that as young adults they will make wise decisions”.

Rekha Pradeep (pradeep16@hotmail.com) of Nrupathunga Kannada Koota along with her husband Pradeep Vittalmurthy, conducts Kannada classes in Lawrenceville. At home, their bilingual children reply to them in Kannada and if the any adult Kannidigas start the conversation in English, the children politely remind them that they can speak in Kannada. Pradeep says one of her proudest moments came when her 13 year old daughter was asked on stage what was her need to learn Kannada in USA, at an Amerikannadothsava event (gathering of Kannadigas living all over the world) in Bangalore, the adolescent girl replied that “Its my mother tongue and one day if I ask my parents what is Kannada it will be a very sad situation, it should never happen, that is why I learn Kannada, and also to encourage everyone even my next generation to learn Kannada”. And when asked how she promotes Kannada, she said, “To Kannadigas who speak to me in English, I reply in Kannada”. Ms. Pradeep says that her children’s grandparents were very happy and believe that its Gods gift that their grandchildren learned Kannada in a foreign country. She takes teaching Kannada very seriously When a child of Kannada origin speaks to her in English, she replies to them in Kannada. When asked, will it not be considered rude to teach Kannada to others children even if the parents don’t care to teach their offspring Kannada, she promptly replies, “Will we not make an effort to teach English to our friend’s child if that child does not know to speak English? Let the fragrance (of Kannada) spread out. I am not doing any harm to my friend’s child”.

Finally she adds, “As parents in America we are not asking our children not to speak English but to add another language. Anyone who does not love his mother tongue will lack in confidence and even though we live away from our homeland, we should love and have patronage for our country and mother tongue. Apart from our mother tongue, try to learn other languages too. Don’t think any language is inferior to the other”.